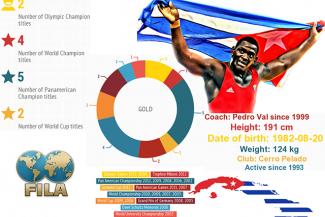 Karelin of the USSR and Russia enjoyed a seemingly unmatchable reign as the king of Greco-Roman wrestling’s heavyweight division, winning nine straight World Championships and three straight Olympics from 1988 to 1999. The Russian giant, seemingly hewn from stone at 191 centimeters and 128 kilograms of solid muscle, became a legend, known as the strongest and most fearsome wrestler to ever walk the Earth. Lopez, though a legend in his own right with four world championships and two Olympic gold medals, has always labored in the shadow of Karelin.

The Cuban must now endure comparison to the Russian in terms of both accolades on the mat, and their imposing physiques, as Lopez himself towers over opponents with a chiseled 196 centimeter, 120 kilogram frame. The 31-year-old from Pinar del Rio seems destined to always chase Karelin in all aspects of his wrestling career.

Karelin’s era of hegemony ended in 2000, and Lopez’s began in 2005. The United States’ Rulon Gardner’s wrestling career spanned the gap between the two dynasties. The American big man is the only wrestler to place in front of both all-time greats at the Olympics. At the end of Karelin’s run at the top, Gardner improbably upset the Russian juggernaut 1-0 in the gold medal finals of the 2000 Sydney Olympics. Then, at the 2004 Athens Games, early in Lopez’s rise to prominence, Gardner won a bronze medal in the 120 kg weight class while the Cuban titan finished in fifth.

The two-time Olympic medalist still remembers the first time he set eyes on Lopez during a trip to the heavyweight’s Caribbean homeland for a tournament in the early 2000s. The young Cuban’s impressive height and powerful musculature were not the only things the left an impression on the American.

""I first saw him in the practice room when we went to visit Cuba for the Granma Cup,” Gardner recalled when FILA asked him about Lopez this week. “The thing that jumped out at me was his length, his arms were almost as wide as he was tall.""

Indeed, Lopez possesses a unique body ideally suited for Greco Roman dominance, with the height to create intense leverage, the reach to lock his arms around any opponent and the brute strength to launch any adversary in a high amplitude throw. The wrestler’s Cuban countrymen have even dubbed him with the ironic nickname “The Kid”, a humorous acknowledgement of his enormous dimensions.

While Lopez’s unmatched physical gifts play a role in his success, he also derives his dominance from skill and finesse. Rulon Gardner wrestled Lopez in four matches from 2000 to 2004, and still remains impressed by the Cubans dazzling technique.

""He had great chain wrestling and would flow really well from move to move,” Gardner remarked. ""I would definitely rate him as one of the greatest I ever had to wrestle.""

As great a wrestler as Lopez is, and as much as he has achieved, his record still contains a couple of blemishes. In the finals of the World Championships in 2006 and 2011, the Cuban suffered shocking losses, and left with silver medals. To his credit however, he avenged both defeats spectacularly, routing defending Olympic Champion Khassan Baroev of Russia 6-1 in straight periods during the 2008 Olympic finals, and shutting out 2011 World Champion Riza Kayaalp of Turkey 3-0 in the 2012 Olympic Semifinals. Though Lopez has fallen short on a couple of notable occasions, his old foe Gardner marvels at the fact that his former rival has suffered so few loses in the current ultra-competitive environment of Greco-Roman’s top flight.

""I am a little surprised at all that he has accomplished,” Gardner observed. “Because of my past, I know how hard it is to keep winning day in and day out.""

""It's amazing to see what he has done""

Lopez now has the opportunity to keep his amazing string of championships alive. Cuban Newspaper, Juventud Rebelde , reports that Lopez sat out of wrestling for 2013 as a means of recuperating from small injuries accumulated over a decade of Senior-level wrestling competition, and that the two-time Olympic  champion looks forward to another Olympic run, particularly under the new, more accommodating weight limit of 130 kg. At the 2014 Granma Cup earlier this month, Lopez returned to the mats and showed no ill effects from his time away from the sport, as he cruised to a tournament championship.  It looks as if when the Cuban delegation attends opening ceremonies of the 2016 Olympics, Lopez will precede the rest of the island nation’s athletes into the stadium, as he carries Cuba’s flag for a remarkable third time.

At the Rio de Janeiro Games, a mere three years away, Lopez has a chance to tie the great Karelin with a third Olympic gold medal, one gold away from the most of all time. Lopez has chased the greatest throughout his career, and may just have what it takes to catch him.