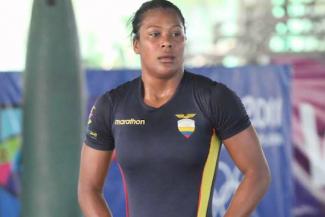 MEXICO CITY – Angelica BUSTOS, Luisa VALVERDE and Lissette ANTES made history Wednesday night in Mexico City, winning back-to-back-to-back gold medals for Ecuador. The titles were the first for the South American country at the Senior Pan-American Championships in any wrestling style.

Bustos led the charge at 53kg pinning Brittanee LAVERDURE (CAN) in 1:24. The lightweight’s efforts were followed up by countrywoman Valverde at 55kg as she edged Sayory CARION (COL), 6-6 via criteria. The Ecuadorian trifecta was made complete by Antes at 58kg when she pinned Yanet SOVERO (PER) late in the second period.

Ecuador did not enter wrestlers at 69kg or 75kg and finished in fourth place as a team.

Colombia was the only other nation with multiple champions. Female wrestling stalwart and world No.2 Jackeline RENTERIA (COL) defeated No.16 Justine BOUCHARD (CAN) 6-3 to claim gold at 63kg. Leidy IZQUIERDO (COL) followed Renteria’s win with a second-period fall over Candida DE ARMAS SARDINA (CUB) at 69kg. The Colombian side finished in third place with 52 points.

Canada won the team title with 60 points with world No.2 Michelle FAZZARI (CAN) earning the nation’s only gold medal. The Canadians edged rival United States (54) on the strength of three silver medals and a pair of bronze.

48kg
A matchup between two of the top-ranked women in the world materialized, but only for 18 seconds. Seventh-ranked Victoria ANTHONY (USA) won gold after sixth-ranked Jessica MACDONALD (CAN) was forced to injury default early in the first period of their championship match. MacDonald, a 2012 World Champion, reached the final with a technical fall and two pins. Anthony, who was fifth in the 2013 World Championships up at 51kg, pinned all three opponents to get to the finals. It was her first Pan American championship. Vicmarie TIRADO (PUR) and Thalia MALLQUI (PER) won bronze medals.

53kg
Like Anthony, Angelica BUSTOS (ECU) claimed her first Pan American championship by defeating Brittanee LAVERDURE (CAN) by fall in 1:24. The championship was also the first individual gold for Ecuador at a senior-level Pan Am Championship. Ecuadorian wrestlers had finished second on three other occasions. Of Bustos' four matches, she pinned three opponents. She has previously won a Pan American championship at the Junior level in 2011. Aguis RIVAS (VEN) and Haley AUGELLO (USA) won bronze medals.

58kg
Lissette ANTES (ECU) made it three in a row for the equatorial South American nation as she pinned Yanet SOVERO (PER) late in the second period to claim the gold medal. Antes was coming off a strong international performance back in March when she won gold at the South American Games. Antes had won three previous Pan American Junior gold medals. She was a bonze medalist in 2011. Last year's gold medalist, Yaquelin ESTORNELL (CUB) and Sandra ROA (COL) won bronze medals. Estornell was ranked 20th in the World at 60kg, while Roa was ranked 20th at 58kg. No. 13 Joice SOUZA DA SILVA (BRA) finished fifth.

60kg
Ranked second in the World at 58kg, Michelle FAZZARI (CAN) gave the Canadians their only gold medal with a tight 3-2 victory over Lais OLIVEIRA (BRA). Fazzari teched eventual bronze medalist Cheyenne YOUNGBLOOD (USA) 10-0 in the semifinals. It was Fazzari's third medal of 2014. She'd won gold at the Sassari Tournament back in May and was a silver medalist at the Klippan Lady Open in Sweden back in February. Youngblood and Dayana MENDEZ (ECU) won bronze medals.

63kg
World No.2 Jackeline RENTERIA (COL) defeated No. 16 Justine BOUCHARD (CAN) 6-3 to claim gold at 63kg. Bouchard was ranked at 60kg. For Renteria, a two-time Olympic bronze medalist, it was the third gold medal of 2014. She won the Canada Cup earlier this month and also claimed titles at the South American Games and Cerro Pelado. It was her first Pan American championship since 2007. Natacha GIRMAN (VEN) and World No. 19 Katerina VIDIAUX LOPEZ (CUB) won bronze medals.

69kg
Leidy IZQUIERDO (COL) gave her nation a second gold medal with a second-period fall over Candida DE ARMAS SARDINA (CUB) at 69kg, avenging a loss at the Central American & Caribbean Games back in April in San Juan, Puerto Rico. Izquierdo becomes the fifth Colombian woman to win the Pan American championships. Renteria and Roa each have two titles. Izquierdo got past eventual bronze medalist Julia SALATA (USA) 6-5 in the semifinals before pinning De Armas Sardina at the 3:31 mark of their final. It was Izquierdo's first major international gold medal. Salata and Justina DISTASIO (CAN) earned bronze medals.

75kg
In a battle of ranked wrestlers, No. 16 Lisset HECHEVARRIA (CUB) pinned No. 17 Andrea OLAYA (COL) at 2:16 to claim a second straight Pan American championship. It was a rematch between the gold and silver medalists at the Cerro Pelado held back in February. That match was also won by Hechevarria. Victoria FRANCIS (USA) and Leah CALLAHAN (CAN) won bronze medals.