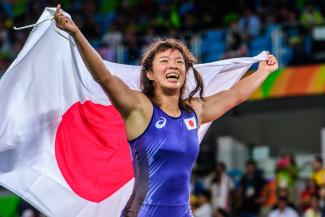 CORSIER-SUR-VEVEY (February 13) – United World Wrestling has announced the draws for the upcoming Women’s Wrestling and Men’s Freestyle World Cups. The dual-meet based events are an annual highlight of the international wrestling calendar, and will be held in Japan and United States, respectively.

For the Women’s World Cup Japan and Belarus lead groups A and B with Belarus having been awarded the Group B tiebreaker over the United States after a pre-selection drawing of names. The teams had tied for second place at the 2017 World Championships.

Considered the most dominant women’s wrestling nation in the world, Japan has won nine World Cup titles, while China has captured six. The United States is the only other nation to have won the cup, capturing the 2003 title in Tokyo.

Japan, who won last year’s World Cup in Russia, will be without 2017 World Champion Yui SUSAKI (48kg) who lost in a recent wrestle-off against rival Yuki IRIE. Otherwise, the Japanese side is scheduled to start a number of world and Olympic champions to Takasaki, including RIO 2016 titlists Risako KAWAI (63kg) and Sara DOSHO (69kg). 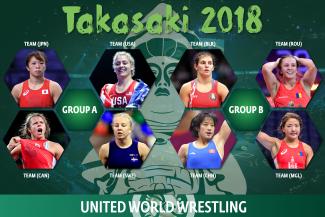 The United States freestyle team, who won their first team gold in 22 years at the 2017 Wrestling World Championships, will lead a loaded Group A into the 2018 World Cup in Iowa City, Iowa.

The host nation will face Georgia, Japan and Iran in the group stage, while Russia squares off against Kazakhstan, Cuba and Azerbaijan. Team USA has hosted the event four of the last five years, but hasn’t won since 2003.  Iran, who hosted the event in 2017, is the defending champion and has won six straight World Cups.

Iran is expected to bring world and Olympic champion Hassan YAZDANI CHARATI at either 86kg or 92kg.

The former Soviet Union has the most World Cup team titles with 15 team, followed by the United States with 13 and Iran with 8. Russia has won five titles since 1998 and six overall. Azerbaijan captured titles in 2004 and 2009, while Cuba took gold in 2005 in Uzbekistan.

The Freestyle World Cup will be hosted April 7-8 at Carver-Hawkeye Arena in Iowa City, Iowa. 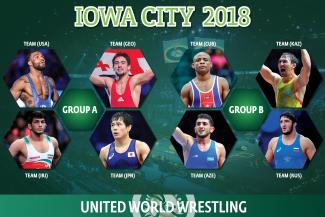