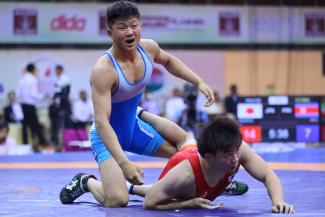 NEW DELHI (May 14) - KIM Han Song (PRK) pulled off the surprise of the final morning session at the Asian Senior Championships on Sunday, snatching a victory from Rio 2016 silver medalist Rei HIGUCHI (JPN) with a late fall in their 61kg freestyle semifinal.

Kim, trailing 7-14, locked up Higuchi’s arms as the Japanese took a sitting position while trying to counter a tackle and -- with his back against Higuchi’s chest -- forced him to the mat long enough for the fall at 5:38.

With the win, Kim advanced to Sunday evening’s final against Asia 2016 silver medalist Behnam EHSANPOOR (IRI), one of three Iranians to advance to the four gold medal matches on the final day at the Indira Gandhi Sports Complex wrestling stadium.

The other 61kg semifinal featured a rematch of last year’s final, with Ehsanpoor avenging his loss to Daulet NIYAZBEKOV (KAZ) in Bangkok with a solid 9-4 victory that included three takedowns in the second period.

Higuchi, the Rio silver medalist at 57kg, earlier survived a scare when he rallied from a 2-4 deficit to defeat Harphool HARPHOOL (IND), 7-6.

Against Kim, Higuchi trailed 0-5 after the first period, but went ahead with a takedown and five consecutive cross-ankle turns. A cradle for two points made it 14-5. With time running down, Kim went in for a tackle, and tilted Higuchi over for two points. But he didn’t stop there, latching onto his opponent’s arms to secure the stunning fall.

"The Japanese wrestler is strong enough to defeat my wrestler, but my wrestler defeated him by the will to win," DPR Korea team official O Kwang Hyok said.

"He is still young, but he beat the Japanese wrestler. I think that he will be sure to win ... because he goes into the competition picturing his mother, his father, his brothers, and the Respected General."

Japan coach Shogo MAEDA speculated that Higuchi’s undoing might be traced back to his loss in the Rio 2016 final to Vladimir KHINCHEGASHVILI (GEO), who stubbornly defended a 4-3 lead to take the gold medal.

"Most likely, (he recalled) Khinchegashvili protecting a lead that way," Maeda said. "In the India match, he had a three-point lead and easily gave up two points at the end. So he had it in his mind he could ride it out like that. That came out in the (semifinal) match. But the opponent tied up his arms and that led to the defeat." 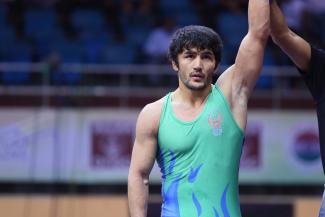 The host country, still buzzing from winning its first gold medal the previous day, was brought back down to earth when Asian 2016 silver medalist Kumar VINOD (IND) was soundly beaten by 12-2 technical fall in his 70kg quarterfinal match to Momojiro NAKAMURA (JPN).

India will have another chance for gold when Sumit SUMIT (IND) takes on Yadollah MOHEBI (IRI) in the 125kg final. Mohebi staged a comeback of his own in the semifinal, in which he trailed 4-8 late against NAM Kyoungjin (KOR) before tripping his opponent onto his back and recording a fall with 13 seconds left. 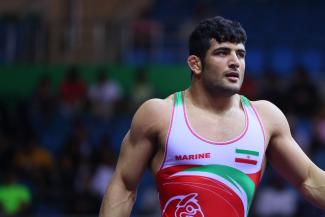 In the 86kg final, Rio 2016 Olympian and 2015 world bronze medalist Alireza KARIMIMACHIANI (IRI) will look to add to the Asian gold he won in 2015 when he clashes with Azamat DAULETBEKOV (KAZ).