ACAPULCO, Mexico (May 7) -- For three years now, no wrestler has been able to score on Sarah HILDEBRANDT (USA) at a Pan-American Championships. Such has been her domination on the mat that she is yet to lose a bout at the tournament dating back to 2013, the year she won her first Pan-Am title at 55kg.

She extended her unbeaten record Saturday by winning her seventh Pan-Am title in Acapulco, Mexico and leading team USA to the women's team title on the third day of the tournament. The Tokyo bronze medalist spent only three minutes and 24 seconds on the mat over three bouts, winning all of them by technical superiority. 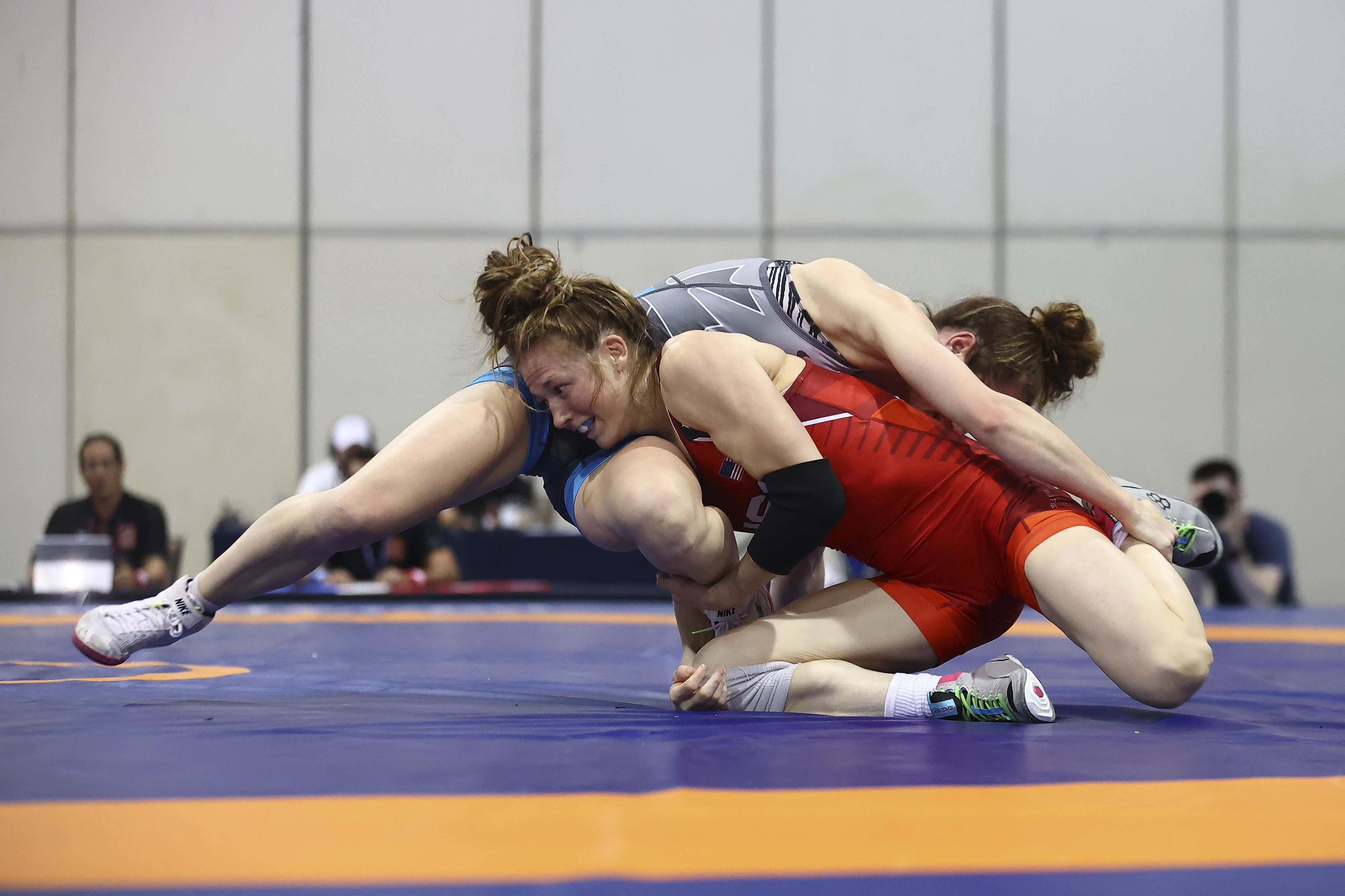 Hildebrandt faced Madison PARKS (CAN) in the 50kg final and finished the bout in less than a minute and celebrated the win by holding up seven fingers, symbolizing the seven titles she has won.

"That was my seventh Pan-Am championships or Games title," Hildebrandt said referring to her one Pan-Am Games gold which she won in 2019. "It's up there. This is exposing my age."

Despite being nine years older since she won her first title in 2013, she has only become more dominant on the mat. In Acapulco, she used her preferred leg lace to win the final against Banks, her opponent in the semifinal from a year ago.

"I love my sweep single which gets me close to my lace," she said. "So I am always out for that. I have a par terre idea these days. I feel I can attack from anywhere and I am comfortable from where the match goes."

In the semifinal against Patricia BERMUDEZ (ARG), she switched to a gut-wrench to get the win and it only shows Hildebrandt's creativity on the mat.

After a near-perfect outing in the tournament, Hildebrant is already thinking about the areas in which she would like to improve going into a busy season ahead.

"There are always things in preparation like nerves, mental games, sleep before," she said. "I am always refining outside wrestling and obviously there's a lot in wrestling too.

"Just today in general I felt a little sluggish on my feet. Things could have been better there. Maybe a little hesitant at times. So I am going to go back, watch the film, I always find stuff to pick apart."

The win Saturday will also serve as a big confidence booster for her before she wrestles in the USA for a spot on the World Championships team.

As a '21 silver medalist, she sits in the final of the tournament and will wait for the winner of a trial to wrestle her in a best-of-three series to determine the spot for Belgrade.

Hildebrant said that it's tricky to prepare for such a weight class and tournament which has a number of talented wrestlers entered but she has picked a few names she will keep her eyes on.

"Next step is solidifying a spot on this team and it's a tricky spot," she said. "I am waiting in the final and have to see at the end of this month who makes it out of the position of the trial to wrestle me off.

"It's exciting but tricky too, preparing for multiple, very talented women. I have my eyes on a few people, start zeroing in on that." 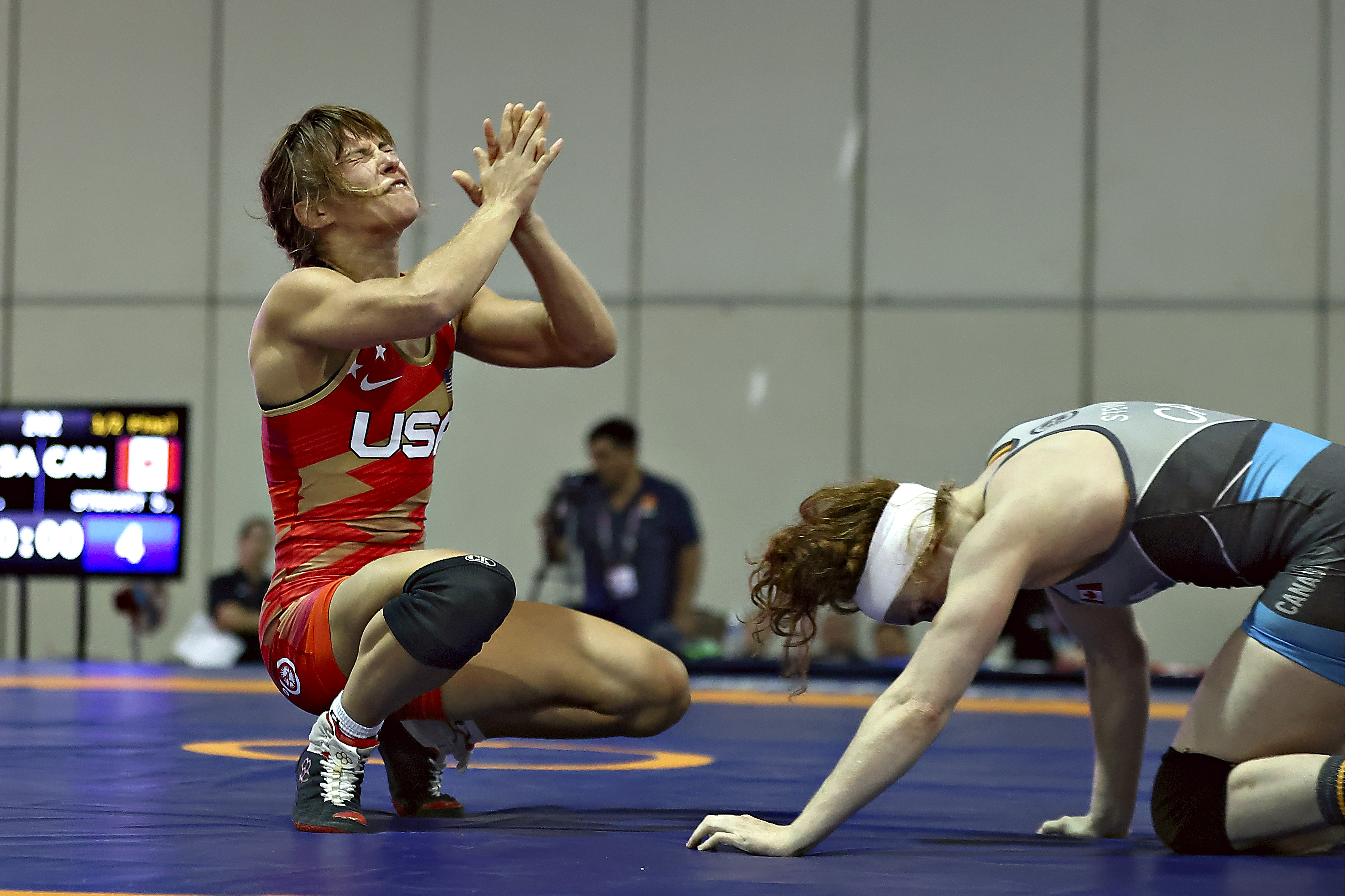 Hildebrandt defending her gold from 2021 was the first of the three the USA won Saturday as Dominique PARRISH (USA) rose above expectations to win the 53kg title while Dymond GUILFORD (USA) came out of an incredibly tough 76kg bracket to win the gold.

Canada added one more gold to the two it had Friday while Cuba and Venezuela crowned a champion each as women's wrestling drew to its close.

The USA won the team title with 190 points, with Canada claiming the second spot with 165 points and host Mexico finishing third with 120 points.

Parrish announced herself to her opponents at team trials by winning the gold at 53kg with a clutch performance. Out of her three bouts, she came from behind in two of them before an asserting win in the final.

"It felt pretty good," Parrish said of her wins. "I don't know if you saw my earlier bouts but they were pretty crazy so it's nice to end that definitively [in the final]."

In her first bout, Parrish was trailing Karla ACOSTA MARTINEZ (MEX) 3-1 but score a buzzer-beating takedown to win. Mexico challenged the takedown call but lost to give a 4-3 win to Parrish.

The semifinal against World bronze medalist Samantha STEWART (CAN) was less dramatic but she still had to mount a comeback after trailing 4-0 at the break.

She first scored a takedown before adding a stepout with over a minute remaining. She utilized that and with 39 seconds still on the clock, she got her decisive two points to win 5-4.

"That was big considering that I started off the first period on my back," she said. "I was thinking about it later that she was a World bronze medalist. It's nice to wrestle everybody as if they are the same level as me and not pay attention to their accolades."

The final against '20 Pan-Am champ Luisa VALVERDE (ECU) was much controlled as she pancaked the Ecuadorian to secure the fall at 1:29 on the clock.

Parrish did find a positive and some areas to improve from the tournament before she wrestles for a spot on the USA world team.

"If I am fighting from behind, I at least know I can score," she said. "[I can] get my hand-fight off to make sure I am moving them and they are not moving me." 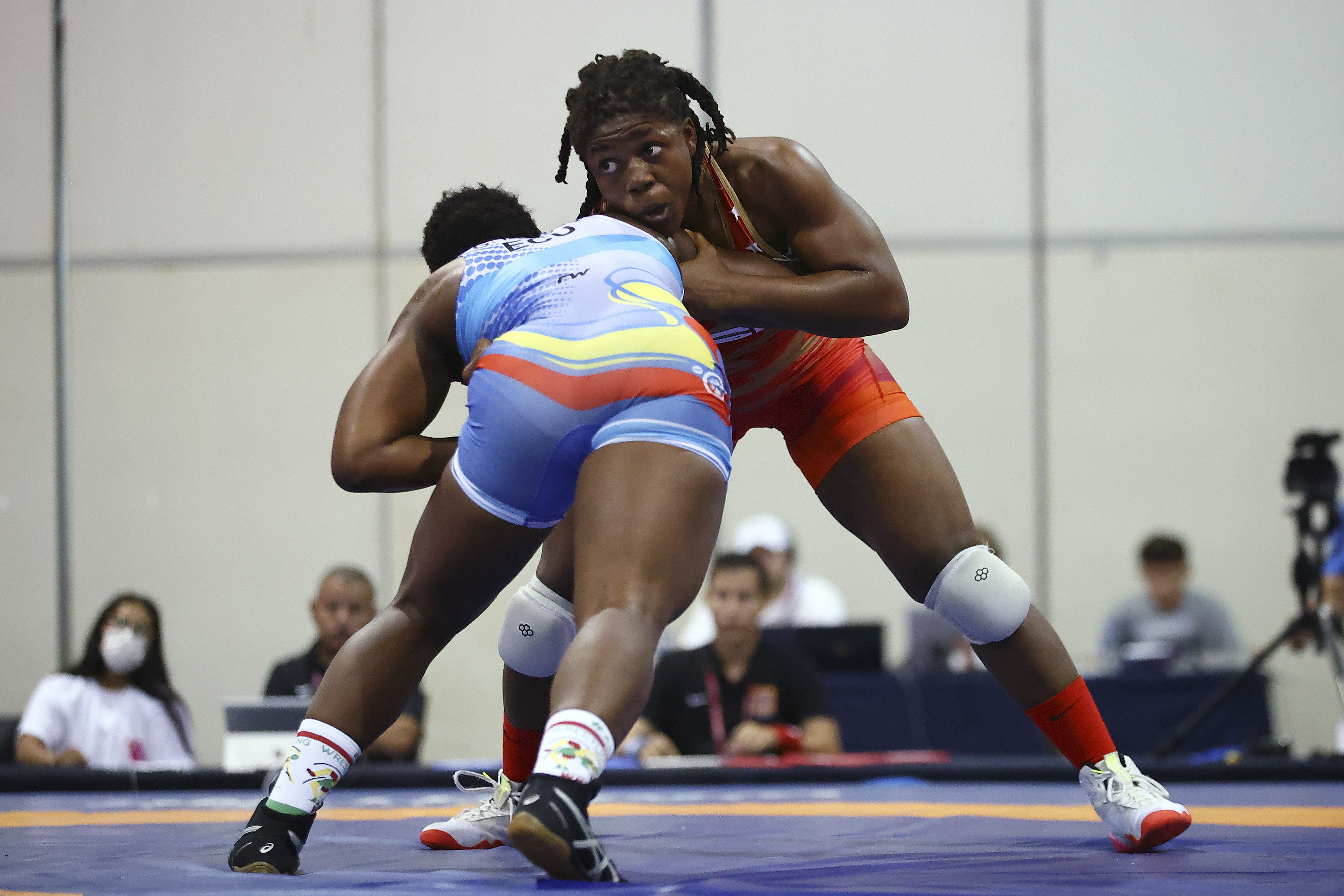 Reasco had stunned world champ and four-time Pan-Am champ Justina DI STASIO (CAN), 10-4, in the quarterfinals before pulling off a nerve-wracking 4-4 win over U23 world silver medalist Tatiana RENTERIA (COL) in the semifinals.

Guilford began the day with a fall over Ruthy PINHAL DOS SANTOS (BRA) before a 10-0 win over Maria ACOSTA (VEN). In the semifinal, she faced Linda MACHUCA (ARG) and secured a 12-2 win.

For the final, she had a clear game plan in her mind and executed it to perfection to win her first Pan-Am title.

"I watched her other matches and knew all she had was doubles," she said. "When she started, I thought I can do this. I thought she has nothing."

That helped Guilford defend all attacks from Reasco including a double-leg blast when she had only three seconds left on the activity clock. 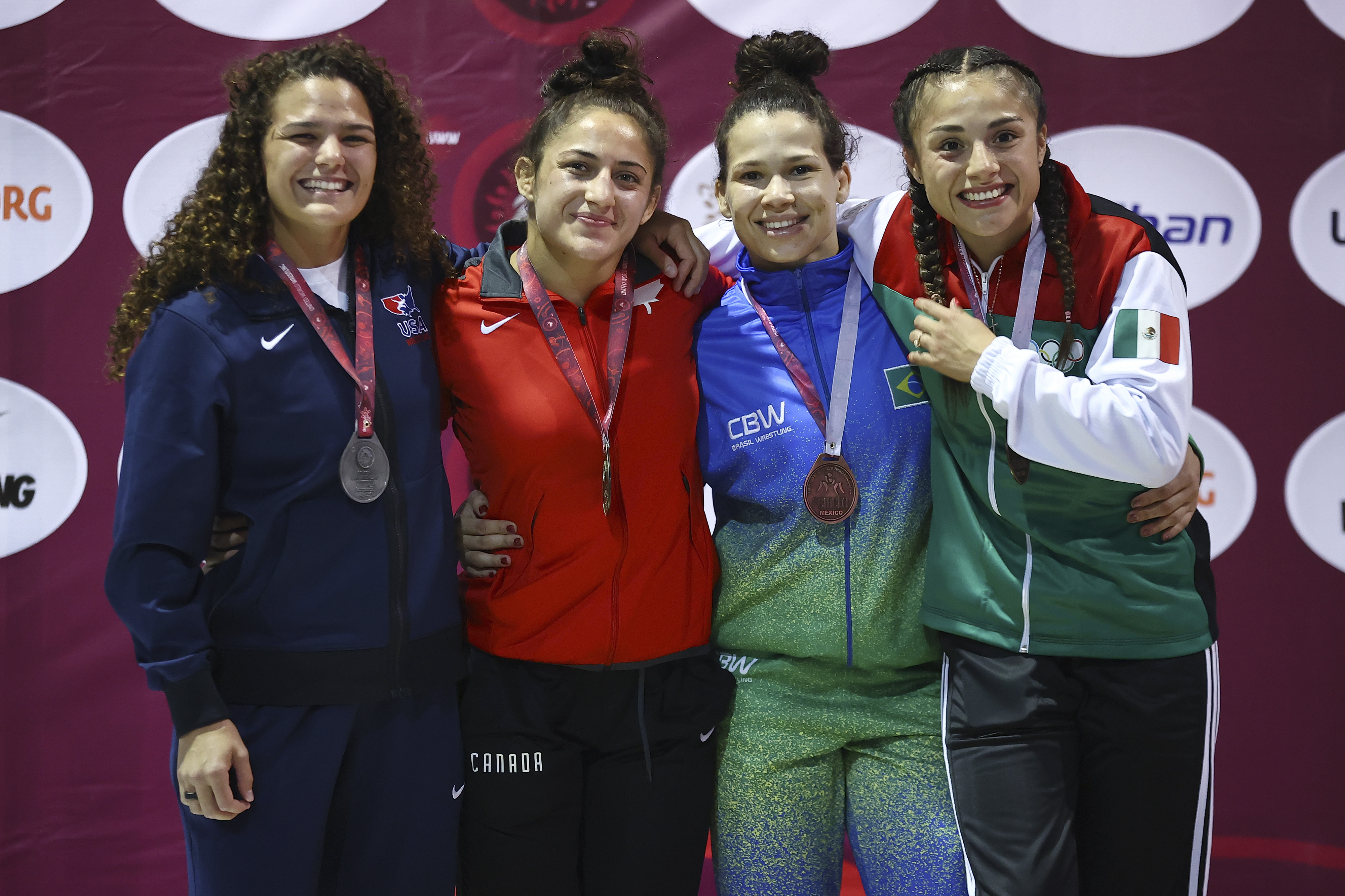 USA had a silver medalist as well as defending champion Kayla MIRACLE (USA) injury defaulted against U23 world champion Ana GODINEZ GONZALEZ (CAN) at 62kg.

Godinez's gold makes it two-in-two for the family as her elder sister Kalra had won the 55kg gold Friday.

Despite the gold, the Canadian wrestler did rue the fact that she could not wrestle enough matches in the competition.

"I wish I had more matches but it happens," Godinez said. "Miracle and I are friends. I go to Pheonix to train quite a bit. It sucks because I did want that final match. I only got two matches but I wanted at least three if not four but it's okay. I just felt bad that she got hurt and I hope she feels better."

Godinez did have a testing semifinal against Lais NUNES DE OLIVEIRA (BRA) and had to remove a deficit to win it 7-5. She was trailing 4-1 at the break but scored three takedowns in the second period.

The win marks another pit spot in the Godinez sisters' journey to the Paris Olympics as Canada builds a newer crop of wrestlers.

"I definitely did want to go to the Olympics in 2020 but I couldn't. I couldn't make it. But here's the time to do it. I trained with Danielle [Lappage] and Erica [Wiebe] before Tokyo.

"Karla has been working really hard and has had some injuries and hard times with wrestling. She has not been able to show how good she is. Karla can finally show how good she really is. She is up there right. She can be the best in the world as well."

But Godinez knows that it will require more than just performance on the mat to make it to the Games and win a medal as she becomes a more experienced wrestler.

"It (growth) came with experience," she said. "I needed to feel the Europeans and South Americans to know the difference in how I can wrestle to be the best version of myself and my wrestling. I have moved to having one coach for me, working on myself and not to do anything with anyone else. Now, I have a more solid plan coming in and I know what I want. I am in the matches I am more composed rather than before I was more random and I was still trying to figure out my style and I needed more experience and I got that." 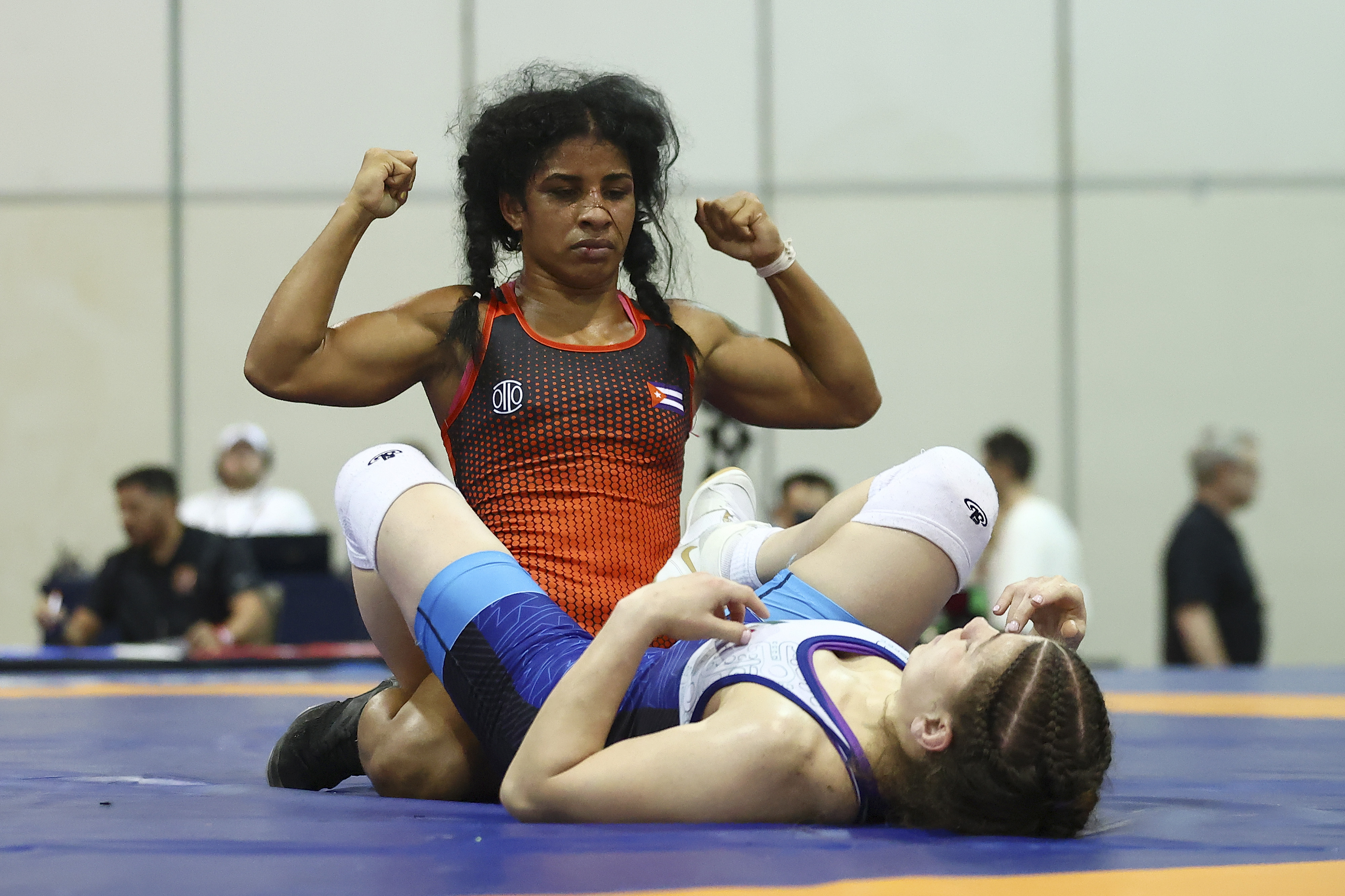 But it was not smooth sailing for her before the final as she barely won her quarterfinal against Giullia PENALBER DE OLIVEIRA (BRA) 12-10 using a big four in the final minute of the bout. It was a similar story in the semifinal as she sneaked past Cameron GUERIN (USA) 12-7.

Hangelen LLANES ECHEVARRIA (CUB) could not join her teammate Sanz as a Pan-Am champ as Soleymi CARABALLO HERNANDEZ (VEN) won the 68kg title by winning the final 12-2. This was her first gold medal at the tournament after finishing with a silver in 2018. 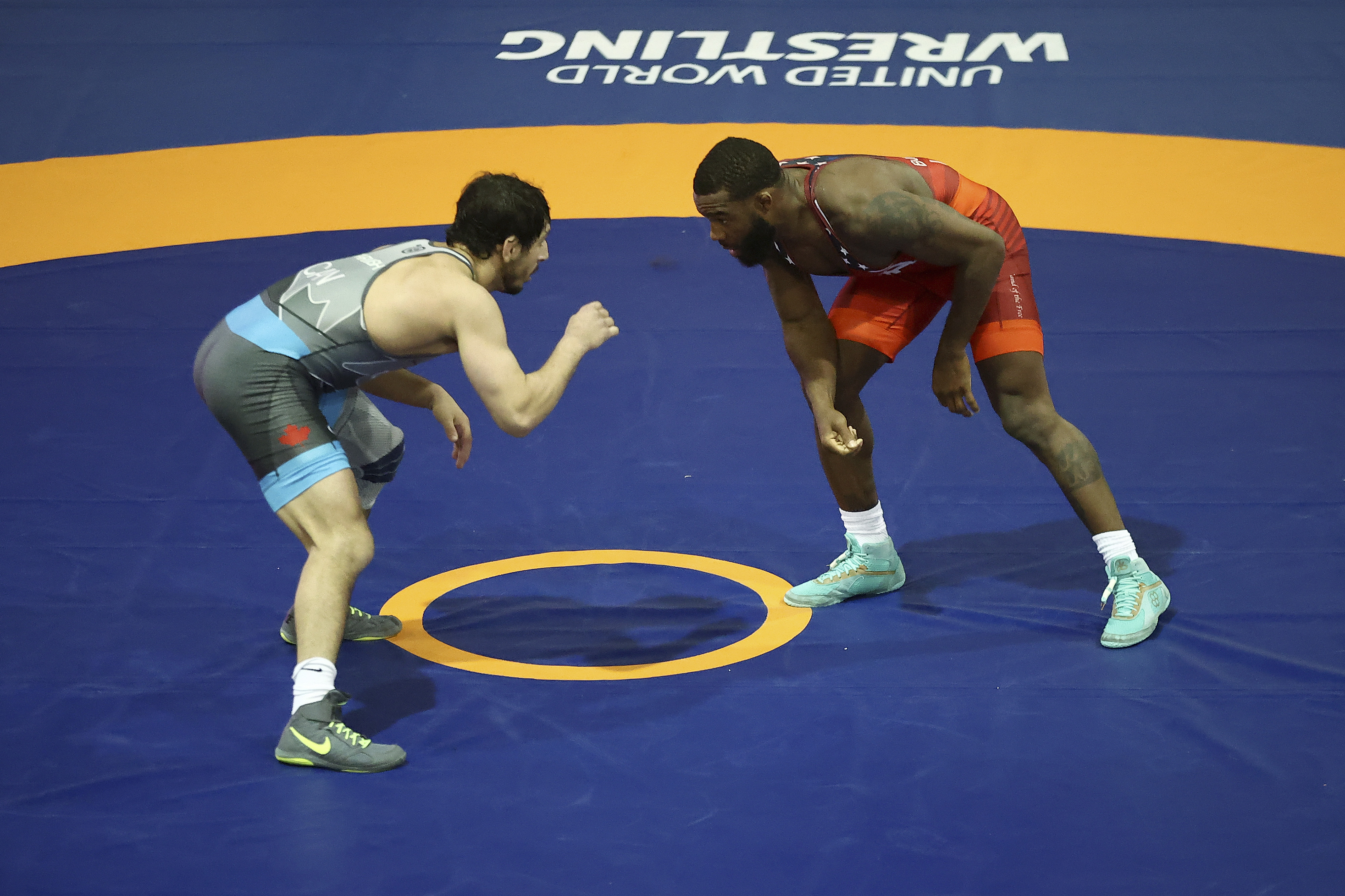 Jordan BURROUGHS (USA) and J'den COX (USA) got their country's team title defense off to a great start by winning the 79kg and 92kg gold in dominant fashion.

Burroughs outscored his opponents 40-1 in his four bouts in the Nordic-style draw to win his fifth Pan-Am title. He also has three Pan-Am Games titles.

Cox had three bouts in the day and like Burroughs, destroyed his competition with ease. He won the title outscoring 31-0. 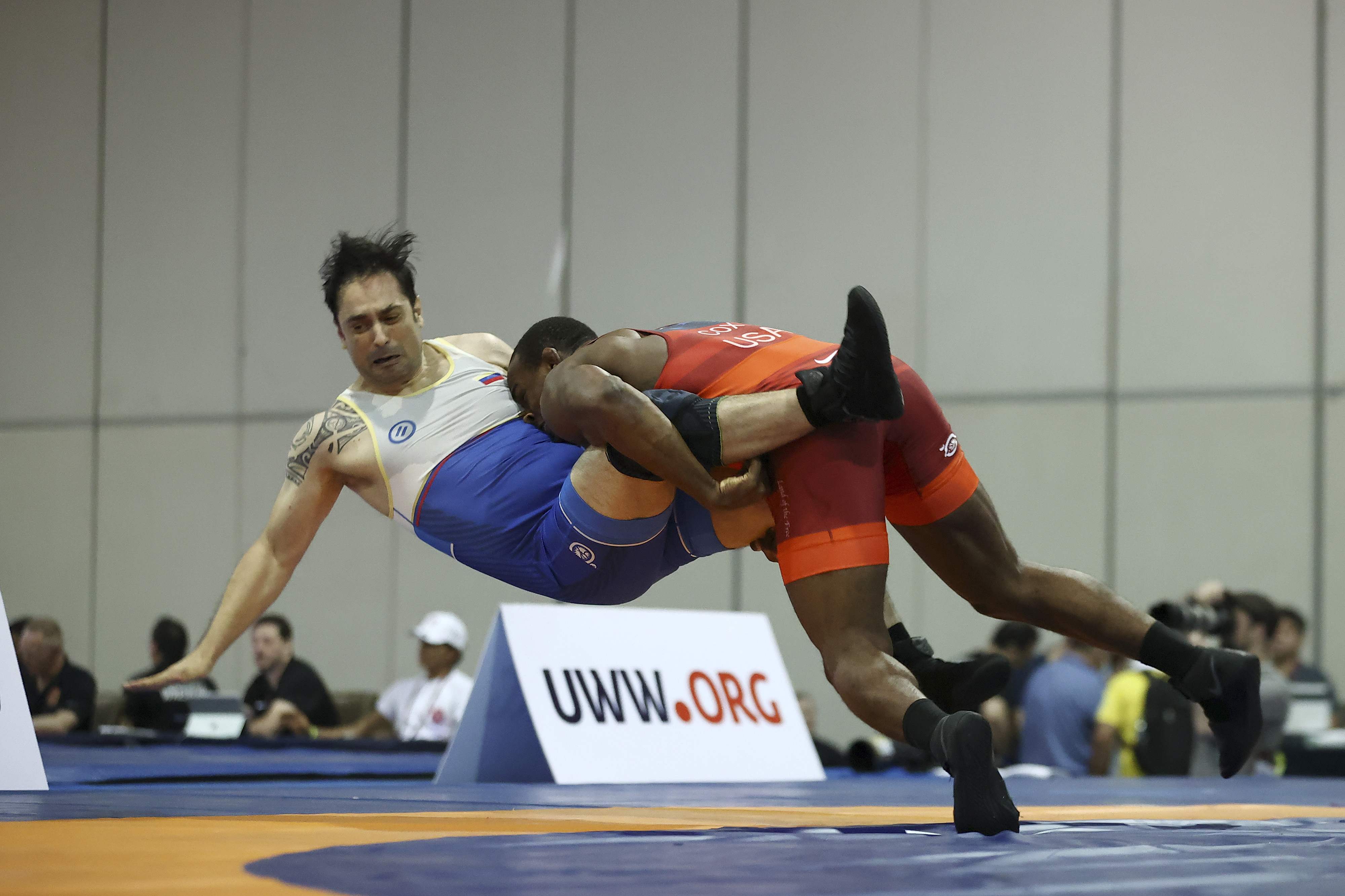