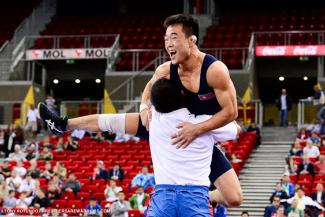 Vladimir Stadnick’s sons know how to marry well. The wrestling club coach from the Ukraine has two boys who’ve each married female wrestlers who happen to become World Champions. One of his sons married 2009 World Champion Mariya Stadnick (48kg) who wrestled for Azerbaijan, while the other son married Friday’s 67kg World Champion Alina Stadnick-Makhina.

The winning ways also applies to his birth daughter, Yana Stadnick, who was a European silver medalist in 2013 wrestling for Great Britain.

The aforementioned 2013 World Champion Alina Stadnick-Makhina thanked her coaches for the preparation leading into Friday’s victory.

“I was optimistic before the competition, my coach helped me in everything and said I was ready for the World Championships,” said Stadnick-Makhina. “The final was physically alright for me, though mentally it was a bit more difficult.”

Won Choi Yun of DPR Korea beat Gyujin Choi of Korea 4-3 in the finals to become the 55kg World Champion. It was the first world title for DPR Korea in Greco-Roman wrestling.

Yun, who placed fifth in the world’s a year ago, and was a bronze medalist in the Asian Championships said, “I am extremely happy! This is the best result of my career!”

Yun confirmed his elation on the mat when he hit a standing backflip for the appreciative Hungarian crowd.

Japan owned a three-point lead over Mongolia heading into Friday night’s finals, but with Mongolia having a chance for two bronze and Japan only one there was a possibility that Mongolia could win their first-ever team title.

Though Nasanburmaa did everything she needed to help secure a team win, it wasn’t to be. Dosho of Japan quickly ended Mongolia’s golden dram with a second period fall in her semifinal match, and a solid three point lead heading into Mongolia’s final match of the night.

The final team scores had Japan edging Mongolia 48-47, while the United States finished in third with 37 points.

Japan has won at least two world titles at each women’s weight with the notable exception of 67kg, where the best their best finish was a bronze in 2006.

With the weight classes scheduled to change in 2015, the Japanese only have one more year to correct their past and find a gold at 67kg.

Canada’s Stacie Anaka fascinated fans of female wrestling rattling off three straight victories on Friday before losing in the finals to Alina Standnik-Makhynia of Ukraine.

A late replacement for the injured 2012 World Silver medalist and 2013 Junior World Champion Dorothy Yeats, a 2007 Junior World bronze medalist used a late takedown against world #1 Nasanburmaa (MGL) in the first round to earn a 3-2 victory. The Canadian vet then steamrolled past Azerbaijan’s Gozal Zutova, 9-1, before earning an 8-6 win over Zhangting Zhou in the semifinals.

“I had three tough matches,” said Anaka. “My aim is always to enjoy wrestling and this has been the case today.”

Down 3-0 with 90 seconds remaining in his bronze medal match, Hungarian 55kg Modos pushed the pace against Russia’s Tatarinov to create a scramble and eventual takedown. Once on top, the Hungarian was in control, where he earned a 1-point exposure, and back-to-back 2-point exposures to secure an eventual 7-3 victory, sending the local fans into a craze.

The Hungarian lightweight thanked his parents and fiancée after the match for their support during his recovery from a shoulder surgery, and said their support lead him to the medal stand.

“I was sure to take gold! I was thinking of this move a lot before the match, where I go behind and throw him away,” said Modos. “This is a fantastic feeling. I hope I will perform even better in Rio.”

Natalia Vorobeva of Russia was in shock on Friday night. The 2012 Olympic Champion was up 4-0 with two minutes remaining in her finals match against Fengliu Zhang of China when things went south. The Russian champion got caught on her knees and whipped to her back with a whizzer and pinned at the 4:33, giving the world title to the elated Zhang.

“I have to admit I was very, very lucky in the end,” said Zhang. “My coaches say I have been improving a lot since my previous big event. I am extremely happy!”

A devastated Vorobeva could hardly stand after the match and slinked her way beneath the stadium to escape the commotion.

“I was in control for much of the final, but I made a mistake in the end,” said Vorobeva. “I should have been more patient, but I was still too offensive and my opponent took advantage of it. I am very young, I could still improve tactically in the future.”