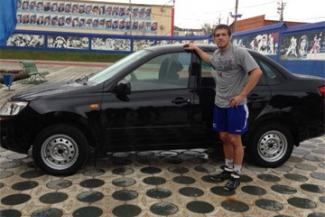 Jimmy Kennedy (USA) showing off his Lada Granta, a subcompact made by Russian automaker AvtoVAZ in association with Renault. He won the automobile after taking home the gold in the 60kg weight class at the Intercontinental Cup in Khavasyurt.

He may not know how to ship it home, but American wrestler Jimmy Kennedy is the new owner of a Russian-made Lada Granta subcompact car.

The 60kg wrestler was awarded the car for beating Murshid Mutalimov of Dagestan winning his weight class at this weekend’s Intercontinental Cup. The Khasavyurt Federation, who organized the tournament, chose to honor the winner of Kennedy’s weight class before the finals. Kennedy, wrote about his excitement on the social media site Twitter while also posting a photo,

“Won my first Russian tournament and they gave me a car!”

Though Kennedy won a car, it was the Dagestani wrestlers won four of the seven competed weight classes in Khasavyurt, earning gold at 66kg, 74kg, 84kg and 96kg. Georgian wrestlers bookended the event with wins at 55kg and 120kg.

At 55kg Beka Budzhiashvili (GEO) made an impression in his first FILA-sponsored event, earning a finals win over Shamil Omarov of Russia. Teammate Georgi Sakandelidze won the 120kg division for the second consecutive season. The 2010 European Junior Champion and Junior World bronze medalist earned his gold over local favorite Arslanbek Aliev a bronze medalist at the 2010 Golden Grand Prix.

Despite the Georgians victories and Kennedy’s new set of wheels, the Dagestani locals were impressive throughout the two-day event, earning a total of nine medals.

Magomed Ibragimov won the title at 96kg defeating Dustin Kilgore (USA) in finals. The Russian wrestler placed 5th at 84kg in last year’s Russian Nationals, the weight where he also won the 2012 FILA Golden Grand Prix Finals and turned in a silver medal performance at the 2013 Ivan Yarygin Grad Prix.