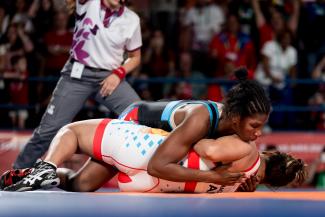 BUENOS AIRES (October 13) – The risers shook, and eardrums ached as Linda MACHUCA (ARG) made her walk to the mat Saturday night for her 73kg gold medal final. The local teen had gone 4-0 in early action and was wrestling for her nation’s first gold on the mats.

Fans at the Asian Pavilion were swaying, dancing, clapping, howling – a moment of pure joy and anticipation for all those in attendance.

But just as enthusiastic as the teens clapping their red thunder sticks, Cuba’s Milaimys MARIN POTRILLE (CUB) was stoic. Taller than Machuca, Potrille glided across the field of play and climbed to the top of the mat. The wrestlers shook hands and as the whistle blew Portrille launched a double leg for four points, landed in a pinning position and put an end to Machuca’s storybook ending.

Though noticeably disappointed the Argentinian fans supported each wrestler as their name was announced, the hall filling with thunderous applause as Machuca left the mat, teary-eyed and head hanging. Machuca and Potrille’s final was the capstone to a night filled with emotion.

The evening’s first gold medal final featured Emily SHILSON (USA) taking on a scrappy Simran SIMRAN (IND). The American opened up a large lead, but conceded six points late in the match, but managed to escape with the 11-6 win.

Stern-faced, Shilson seemed disappointed with her performance and was reluctant to grab her nation’s flag to celebrate the victory. But she quickly relented and made the requisite lap around the mat - a fragile smile cracking through an otherwise resolute face of focus.

“I got sloppy at the end and didn’t wrestle as sharp as I wanted,” said Shilson when asked about her initial reaction. “It was a good experience though, because now I have things to go work on and I can clean up those mistakes and learn to stay on top.”

“And I’m having the best time here,” she added with a smile. With her win, Shilson became the United States’ first-ever YOG gold medalist in wrestling.

Nonoka OZAKI (JPN), whose fanbase dressed in gi blue tops adorned with a large flag of Japan on their back, had no problem showing happiness after winning her final. Ozaki dominated Hungary’s Anna Hella SZEL in final, working to a 10-0 technical superiority victory in the second period.

China’s Xinru ZHOU (CHN) was workman like in winning her nation’s first gold medal in wrestling. The rangy wrestler defeated Oksana CHUDYK (UKR) by TF, 10-0 in less than 30 seconds.

"This is the best moment of my life," said Emma MALMGREN (SWE) after winning the 49kg gold medal (Photo: Max Rose-Fyne)

“It feels so good because everybody is a high-class wrestler who comes here with the same goal of winning Olympic gold,” said Malmgren. “I trained very herd and very tough. Wrestling is always about blood, sweat and tears, but I trained even harder and this was even more special.”

“This is the best moment of my life.”

Wrestling resumes tomorrow at 10am local/9am ET with men’s freestyle and continues at 5pm local/4pm ET with the finals. 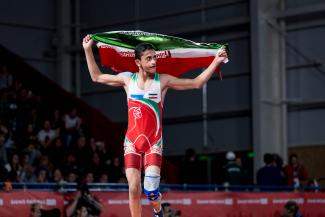 BUENOS AIRES (October 12) – Iran notched their first two gold medals of the 2018 Youth Olympic Games Friday night at the Asian Pavilion at Youth Olympic Park in Buenos Aires, while Japan’s Wataru SASAKI lodged one of the most impressive Olympic comebacks in years.

Facing Giorgi TOKHADZE (GEO) in the 51kg finals Sasaki was put on the backfoot from the start, being tossed for five points early in the first period. Another takedown made the score 7-0 to end the first period, but in the second period it was all Sasaki.

The slenderer wrestler weaved behind Tokhadze for a quick takedown followed by a gut wrench to score four points. Next Sasaki locked up a front head lock and through the Georgian to four points to take the lead 8-0 – much to the delight of the Argentinian crowd. Sasaki would tack on another takedown and a lost challenge by the Georgian made the final score 11,-7 in favor of Sasaki.

For the often-dominant Iranian team it was business as usual. Amirreza DEHBOZORGI (45kg) was unstoppable against Jeremy PERALTA GONZALEZ (ECU), pressuring the South American wrestler into a series of missteps and racking up a pair of takedowns. After Dehbozorgi found his second takedown, he followed it up with a step out point to win gold, 8-0

Mohammad NOSRATI (92kg) imposed his size on Turkey’s Osman AYAYDIN, controlling the mat for four minutes to win the final title of the evening, 3-1. The big man was jubilant after the match, speaking to reporters and interacting with fans.

“This was a great event for me,” said Nosrati. “I have to thank my fans and the people of Iran for their support during the Games.”