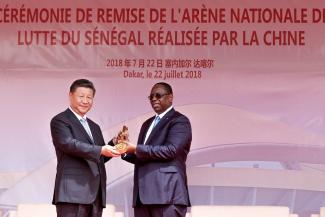 DAKAR, Senegal (July 26) -- Senegalese President Macky Sall and his Chinese counterpart, Xi Jinping, inaugurated a national wrestling arena in Dakar this week in a project funded by the Chinese government.

The first arena dedicated to this popular sport in Senegal, located in the city of Pikine, near Dakar, was inaugurated Sunday, the second day of the visit of the Chinese leader in the Senegalese capital.

Xi Jinping, on a state visit to Senegal, symbolically handed Macky Sall the keys of the national arena of Pikine wrestling, during a ceremony marked by a wrestling matches and dancing.

The new arena, built in 28 months by the Chinese, cost 48.7 million euros and was paid for by the Chinese government. The stadium has a capacity of more than 20,000 places.

"The national arena fills a gap for wrestling," Senegalese Sports Minister Matar Ba was quoted by Agence France-Presse as saying.

According to Mr. Bâ the arena can accommodate other sports such as boxing and martial arts, but also socio-educational activities, such as concerts.

The national arena was always a point of concern for Senegalese wrestling professionals, who were forced to organize their competitions in football stadiums.

Lutte Senegalese is the most popular sport in the nations and often broadcast live on television, mobilize thousands of spectators and sponsors, with payment to wrestlers often reaching tens of thousands of euros for a single match.

(This story originally ran in French on the BBC, here)

Istanbul, Buenos Aires to host next two U17 Worlds CORSIER-SUR-VEVEY, Switzerland (May 25) -- For the first time, the U17 World Championships will be held in South America after the capital city of Argentina, Buenos Aires, was chosen as the host of the 2024 edition.

The announcement was made after the meeting of the UWW Bureau Monday, where host cities for a few continental competitions in 2023 and 2024 were finalized.

The beautiful city of Istanbul, Turkey, which recently hosted the Yasar Dogu Ranking Series event, will be the venue for the 2023 U17 World Championships. In the following year, the U17 World Championships will be held in Buenos Aires, Argentina, a step that will boost the development of wrestling in South America.

The 2021 U17 World Championship, held in Budapest, saw Georgia claim the Greco-Roman team title, finishing just ahead of Ukraine, while the USA won the women’s team title. India went home from that tournament with its first-ever freestyle team title.

The Bureau Members also allocated the 2023 U17 European Championships to the Albanian capital Tirana.

Meanwhile, a request from the organizers of the 2023 Oceania Championships to change the dates of the tournament was approved as well. The championship will now take place in Sydney, Australia, in August, with the exact dates to be finalized in the coming weeks.

The 2024 Veterans World Championships – meant for wrestlers between 35 and 60 years, who will be divided into five age categories – will be held in the Croatian coastal town of Porec.