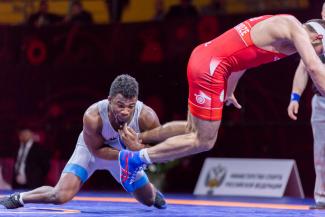 ISTANBUL, Turkey (July 28) - Nearly four months ago, Jordan BURROUGHS (USA) posted a photo on Instagram with the caption “If you want to be the king, you have to beat the king.” Frank CHAMIZO (ITA) did just that on Saturday, getting his revenge against the London Olympic champion in front of a sold out Bağcılar Olympic Sport Hall in Istanbul, Turkey.

Chamizo, the two-time world champion was looking to avenge his loss to Burroughs from May’s Beat the Streets in New York City. In that match, Chamizo commanded the early 4-0 lead but was outscored 6-1 in the final four minutes of the bout, losing the match, 6-5.

Saturday’s bout kicked off a little differently than the outdoor “ice skating” match in New York, as Burroughs scored the match's first point, nearly grabbing a takedown from a low single, but settled for a step out point. The American coaching staff thought Burroughs should have been awarded the takedown and threw the challenge cube. The original call on the mat was confirmed, and Chamizo was awarded a point for the lost challenge, giving the Italian the 1-1 lead on criteria.

With 45 seconds left in the opening period, Burroughs, the four-time world champion picked up the pace and forced the referees to put Chamizo on the activity clock. The American shot a double, came up to a single and picked up step out point, taking the 2-1 lead into the final three minutes.

Chamizo surrendered the bouts first takedown after Burroughs snagged his heavy stepping left foot with a low single, extending his lead to 4-1.

Down by three, Chamizo scored a reversal, cutting Burroughs’ lead to 4-2. But, not before the Italian corner threw the challenge cube, questioning if Burroughs secured the takedown before scoring the reversal. Once again, the referees came together and confirmed the call on the mat, awarding Burroughs a point for the lost challenge, giving him the 5-2 lead.

After giving up his second step out of the match, Chamizo, who is known for his defense scored his first takedown and cut the Olympic champions lead to 6-4 with one minute remaining in the final period.

The Cuban turned Italian increased his sense of urgency after Burroughs extended his lead to 8-4 with his second takedown of the bout.

Chamzio, with his cat-like reflexes, found himself fighting off a Burroughs double, but turned his defense into offense, exposing the American and picking up four points on the out of bounds line, ultimately taking the 8-8 lead on criteria.

The Rio bronze medalist closed out the bout with his third takedown and took the 10-8 lead. Burroughs would score the final two points, but Chamizo held criteria and was victorious, 10-10.

With that win, Chamizo evens up the series at one apiece. The next time these two could potentially meet would be in October at the 2018 World Championships in Budapest, Hungary. 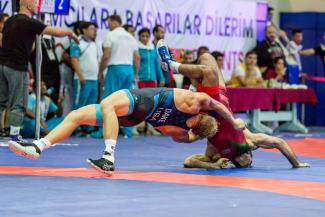 Kyle Dake closed out the Yasar Dogu in dominant fashion, picking up two falls and a technical superiority victory on his way to grabbing the 79kg gold medal.

In his opening round match-up, Dake buried three-time world and Olympic bronze medalist, Cabrayil HASANOV (AZE) with a cradle after commanding an 11-2 lead to set up a semifinal match-up with Turkey’s Ayhan SUCU.

It only took the Ivan Yarygin runner-up 60 seconds to score the fall over Sucu, locking for his second championship finals appearance of the year.

In the finals, Dake squared off against junior world bronze medalist Ibrahim YUSUBOV (AZE). The American used three takedowns, and a pair of gut wrenches to end the gold-medal bout 11-0 in the opening period. This win gave Dake his third overall international gold medal (2014 Granma Cup and 2017 Grand Prix of Paris).

Taylor pinned Kazakhstan’s Azamat DAULETBEKOV in the opening round after being up 14-6.

In the quarterfinals, Taylor took on 2017 world runner-up Boris MAKOEV (SVK), who lost to Hassan YAZDANI (IRI) in the 86kg Paris World finals a year ago.

Taylor sealed his spot in the semifinals after pummeling Makoev 11-0 before gathering his second fall of the day.

The second-ranked wrestler in the world took less than 90 seconds to trample Murad SULEYMANOV (AZE) in the finals. In addition to the Ivan Yarygin and Pan-American gold medal, this is Taylor’s third individual gold medal of the year.

Thomas GILMAN (USA) was the third wrestler from the United States to win a gold medal at the 2018 Yasar Dogu. (Photo by Max Rose-Fyne)

Jordan BURROUGHS (USA), the five-time world and Olympic champion was the sixth American medalist, finishing in second place after falling to two-time world champion Frank CHAMIZO (ITA) in an epic 10-10 shootout. With that loss, Burroughs now has more losses (two) at the Yasar Dogu than 11 World Cup’s and World Championships combined (one).