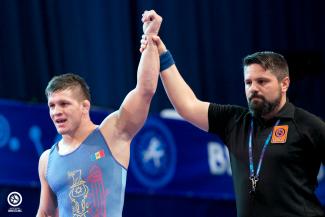 BUCHAREST, Romania – Daniel CATARAGA (MDA) became the first two-time U23 World champion in history, winning the 77 kg weight class on Tuesday night at the U23 World Championships in Bucharest, Romania.

After winning the 2017 U23 World title at 71 kg, Cataraga bumped up to 77 kg to claim his second, putting together a solid tournament to do so.

The Moldova native threw up six quick points on the board before securing a fall and the crown in 2:45.

In the heavyweight finale, Zviadi PATARIDZE (GEO) battled back from a five-point deficit against Osman YILDIRIM (TUR) to win gold at 130 kg.

Yildirim led 5-0 at the break before Pataridze slowly chipped away at the lead, drawing a passivity, two caution-and-twos and a step out point to win his sixth age-group World championship.

Tsurtsumia scored all of his points in the first period and held off an aggressive Kabaloev in the second period for his first World title and second World medal of 2018.

After taking 15th at Senior Worlds in Budapest, Katsuaki ENDO (JPN) dominated Alexandru BICIU (MDA) in the 63 kg finals, 8-0. Endo took advantage of a chance on top in par terre, where he scored five points after the initial passivity point. Endo closed out the match with a takedown late in the first period for the technical fall. 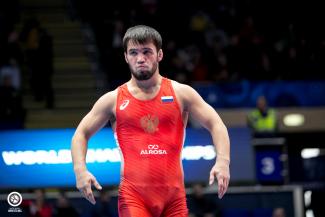