Canadian Young Guns Roll into Finals at Pan Am Games 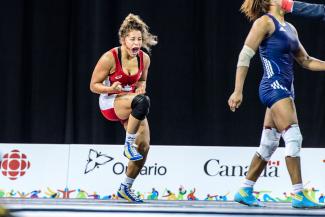 TORONTO, Canada (July 17) – Canada’s “Young Guns” rolled into the women’s gold medal finals on Friday while a pair of U.S. and Cuban showdowns loom on the first day of freestyle events at the Pan American Games wrestling competition.

Braxton STONE (63kg), Dorothy YEATS (69kg) and Justina DI STASIO (75kg) had Canadian fans out of their seats throughout Friday’s afternoon session as they notched wins over seasoned opponents to advance to the evening’s finals at Mississauga Sports Center.

Pan Am champ Di Stasio, 22, took a hard slap in the face from another 2011 gold medalist Lisset HECHEVARRIA (CUB) in their semifinal at 75kg for a penalty point and a 4-4 win. Di Stasio squares off in the final against reigning world champ Adeline GRAY (USA). 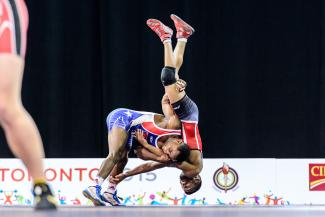 In the quarterfinals, Gray fashioned a 10-0 technical fall over Aline FERREIRA (BRA) in a rematch of their world championship final in Tashkent last September. 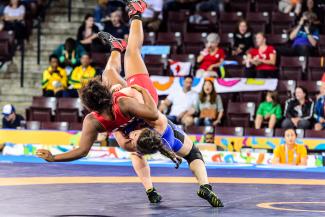 At 65kg, 2013 Pan American champ Franklin MAREN (CUB) held on for a 2-0 win in the semifinals over local favorite Haislan GARCIA (CAN) while Brent METCALF (USA) scrambled from behind for a 10-8 win over former world silver medalist Franklin GOMEZ (PUR) in the other semifinal.