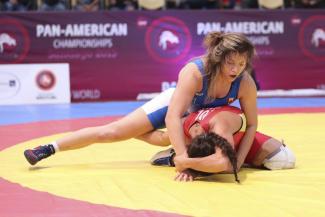 FRISCO, Texas (February 26) – Canada advanced four of its wrestlers to the gold medal finals of the women’s events Friday while the United States grabbed three places for itself as the Pan American wrestling championships got under way at Dr. Pepper Arena.

Defending champion Justina DI STASIO (CAN) capped a successful morning session for the Canadians with a 5-2 victory over 2014 world runner-up Aline FERREIRA (BRA) in the semifinals at 75kg. In the final, Di Stasio will square off with 2015 Pan Am bronze medal winner Andrea OLAYA GUTIERREZ (COL).

Earlier, Canadian Olympic team member Jasmine MIAN (CAN) muscled her way into the 53kg final opposite 2014 Pan American champion Luisa VALVERDE (ECU). Mian, slated to wrestle in Rio at 48kg, recorded a technical fall and fall on her way to the 53kg final.

Samantha STEWART (CAN), meanwhile, rolled up a pair of 10-0 triumphs at 55kg to book an evening showdown with 2015 bronze medal winner Giulia RODRIGUES (BRA).

To win the title, however, Kramble will have to overcome 2008 world champion Clarissa CHUN (USA), who will be seeking her fourth Pan America championship crown and first since 2010.

Amanda HENDEY (USA) came from behind twice with falls at 63kg, including a shocker in the semifinals at 4:15 over Pan Am Games silver medalist Katherine VIDIAUX LOPEZ (CUB). 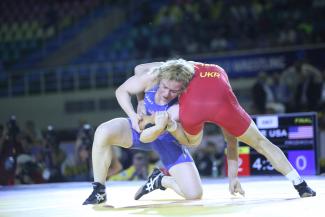 Meanwhile, 2012 world champion Elena PIROZHKOVA (USA) gives the U.S. a chance at a fourth gold medal after posting a pair of wins in the four-wrestler round-robin competition at 69kg.

Pirozhkova faces Toronto 2015 silver medalist Maria ACOSTA (VEN), who also has two wins in the round-robin, in the winner-take-all final.

For complete results, go to unitedworldwrestling.org/event/pan-american-championship-senior-2.

Final Round Pairings in Four-Wrestler Round-Robin

(Both wrestlers have two wins, no losses)