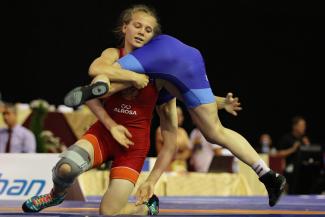 SARAJEVAO, Bosnia and Herzegovina (July 27) – Another day is in the books at the Cadet European Championships, and once again the women delivered a sensational session of wrestling as the championship matches were set in five weight categories.

Cadet world bronze medalist Zeynep YETGIL (TUR) is shooting for the 52kg gold against Ekaterina VERBINA (RUS). Yetgil took down a pair of two-time cadet European medalists on her route to the finals, Szimonetta Timea SZEKER (HUN) in her opener, and Teresa LUMIA (ITA) in the semis, both by 5-0 decisions. Verbina sparked her day with a 10-0 win over cadet European bronze medalist Mariana DRAGUTAN (MDA).

Cadet World silver medalist Petya Zarkova DELCHEVA (BUL) powered her way to the 40kg finals with an 11-0 victory over returning cadet European bronze medalist Zehra DEMIRHAN (TUR) and a pin over Regina MILLER (RUS). Her finals opponent will be Justine Fanny VIGOUROUX (FRA), who escaped with a 1-1 criteria win over Mariam KARELIDZE (GEO) in the semifinals. 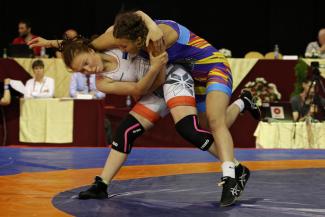 The finals for these five women’s wrestling weight categories will take place at 6 p.m. local time on Friday. The Greco-Roman competition will also kick off tomorrow with athletes at 42kg, 50kg, 58kg, 69kg and 85 kg taking the mat at 10:30 a.m.

For complete brackets and match-by-match results from the Cadet European Championships, visit our results page at unitedworldwrestling.org.