Burroughs to Shine Bright in Texas for Pan American Championships

FRISCO, Texas (February 24) – World champions Jordan BURROUGHS (USA) and Adeline GRAY (USA) will be shining bright deep in the heart of Texas when the Pan American Wrestling Championships get under way on Friday.

Burroughs and Gray lead a host of world and continental medalists into Dr. Pepper Arena, seeking to follow up on gold medals they won last July at the Pan American Games in Toronto as well as at September’s world championships in Las Vegas.

Gray will be first out of the gate on the first day of competition in women’s wrestling. She hopes to keep rolling at 75kg after wins over 2014 world silver medalist Aline FERREIRA (BRA) and potential Olympic Games challenger Erica WIEBE (CAN) in last month’s Rio 2016 Test Event.

Burroughs, who won the prestigious Yasar Dogu crown at 74kg in early February, will follow on Saturday as the championships feature action in all eight weight categories of freestyle.

World medalists joining Burroughs and Gray in Frisco will include James GREEN (USA), who is entered in freestyle at 65kg after winning a bronze medal at 70kg last September. Leigh JAYNES (USA) is also entered at 60kg, where she also won a bronze medal in Las Vegas.

Two-time world silver medalist Reineris SALAS PEREZ (CUB), who also struck gold at the Toronto Games, is entered in the championships at 86kg as well as the Pan American Olympic qualification tourney, March 4-6, also in Frisco.

Despite winning silver medals in 2013 and 2014, Salas Perez still has to earn a berth in the Rio 2016 Olympic Games after slumping to 25th place in Las Vegas following a second-round loss to Pedro CEBALLOS FUENTES (VEN).

Ceballos Fuentes, like Salas Perez, is also entered in the championships and the qualifying tourney after finishing in 10th place in Las Vegas.  Salas Perez is also joined by world and Olympic medalist Livan LOPEZ AZCUY (CUB), who finished in seventh at 74kg in Las Vegas.

The qualifier, in two weeks, features wrestlers from national federations of the continental governing body which did not have a wrestler among the top six place-winners at the Las Vegas world championships.

The top two wrestlers in each category at the qualifier will secure berths for their countries for Rio 2016. 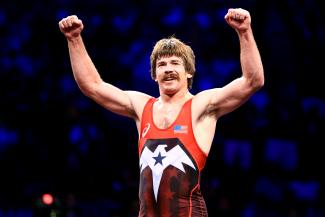 Meanwhile, a handful of world medalists will not be competing in the championships or the qualifying meet since they have already secured a berth for their federation in Rio.

Helen MAROULIS (USA), who won a world title at the non-Olympic weight category of 55kg, will try to qualify the United States for Rio at 53kg in Frisco.

Jasmine MIAN (CAN), meanwhile, steps in at 53kg for the championships after edging world bronze medalist at 48kg Genevieve MORRISON (CAN) in the Canadian Olympic team trials over the winter. Mian will wrestle at 48kg at Rio 2016.

Along with the world medalists, there will be a number of Pan American Games gold medalists, some of whom will be wrestling in both the championships and the qualifier in Frisco.

These include Salas Perez in freestyle and Joice SILVA (BRA) at 58kg in women’s wrestling, and in Greco-Roman on the final day of the championships, Andres MONTANO ARROYO (ECU) at 59kg, Wuilleixis RIVAS ESPINOZA (VEN) and Yasmany LUGO CABRERA (CUB).