Bullen, Mammadov and Top Medalists to Compete at European Juniors 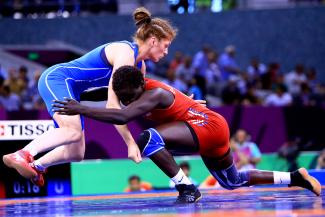 CORSIER-SUR-VEVEY (June 19) – Grace BULLEN (NOR) and Alyona KOLESNIK (AZE) arrive in Istanbul for the junior European wrestling championships from opposite sides of the continent and from different points in their career arcs.

Bullen comes to the junior meet with European and world cadet titles as well as a gold medal from the Nanjing 2014 Youth Olympic Games. She also brings a bronze medal she recently won at the inaugural European Games in Baku.

Kolesnik, meanwhile, who has had only limited success at the cadet and junior levels thus far, arrives for her second European junior meet on a roll with the title from the European championships for wrestlers under 23 years old (U23s) in March and two silver medals in other senior events.

Bullen and Kolesnik, who represent the increasing crossover among wrestlers in different age groups, come to the women’s 59kg category from different directions but could meet on the third day of the championships being held at the Bagcilar Spor Komplexsi.

In addition to the two challengers, a handful of defending champions from last year’s meet in Katowice, Poland, will aim to add to their wrestling resumes, while a number of medalists from the cadet world and European championships will seek their first crown at the junior level.

With entries from some countries still trickling in, more than 400 wrestlers representing 35-40 national wrestling organizations are expected for the 23-28 June competition. 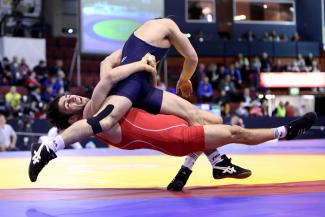 Tarzan MAISURADZE (GEO) helps kick off the freestyle competition as defending champ at 74kg with his bid for a second welterweight title after a nosedive to 34th at the 2014 junior world championships.

Maisuradze could face the challenges of Murad SULEYMANOV (AZE), last year’s silver medalist at 66kg, and Kamil RYBICKI (POL) who also moves up one category after a bronze medal in Katowice.

Nurmagomed GADZHIEV (AZE), last year’s winner at 84kg, was on the early entry list at 96kg, but has since been replaced by Turkhan GURBANOV (AZE), a 2013 cadet world bronze medalist at 100kg. Gadzhiev finished in fifth place at the recent European Games.

Giorgi CHKHARTISHVILI (GEO), runner-up to Gadzhiev, is back for a second chance a European crown after nearly 12 months away from international competition.

For the first time, Georgia will be represented at super heavyweight by someone other than two-time champion Geno PETRIASHVILI (GEO), who just earned a bronze medal at the European Games.

Turkey won the team title in men’s freestyle by one point, 63-62, over Georgia, which had advanced wrestlers to five finals and claimed three champions. Russia came in third with 47 points, despite a pair of gold and silver medals each.

At the writing of this preview, the freestyle entries for Russia had not yet been received by United World Wrestling. 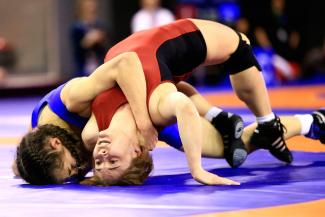 Buse TOSUN (TUR), wrestling in front of a hometown crowd, will be seeking to add a third junior title to her growing collection of European hardware after winning a bronze medal at the U23s in March.

Tosun will likely have to face junior European and world bronze medalist Ragneta GURBANZADE (AZE), who has dropped from 67kg to 63kg this year.

In addition to Tosun, local partisans will also have Evin DEMIRHAN (TUR) to root for as she seeks to improve on last year’s silver medal in Katowice and a bronze medal at the U23s in March.

Miglena SELISHKA (BUL) will also try to bag a third European juniors gold medal at 44kg, after being overpowered at 48kg in the U23 meet, where she finished in ninth place.

Ksenia STANKEVICH (BLR) is set to challenge Selishka at 44kg again after a silver medal in Katowice while Turkhan NASIROVA (AZE) is a returning bronze medalist as well as being the European cadet champion.

Ukraine will be led by cadet world champs Oksana LIVACH (44kg) and Olena KREMZER (51kg) and Anastasia SHUSTOVA (72kg). Shustova, who won her cadet world crown in 2013, will seek to improve on a bronze medal in Katowice.

Sabira ALIEVA (AZE) defeated European junior champion Anzhela KATAEVA (RUS) for the junior world title, after finishing fifth in Katowice last year.  Alieva has yet to find the medals podium in 2015, even though she has a bronze medals from the 2013 Medved Prizes and last year’s Paris Grand Prix.

Another European, world cadet champion to watch will be Nicole AMANN (GER) who will be testing the waters at 67kg against 2014 bronze medalist Moa NYGREN (SWE) and junior world bronze medalist Danute DOMIKAITYTE (LTU).

Russia won the team title in Katowice with 52 points and three gold medalists, followed by Ukraine also with 52 but without an individual champion. Turkey, with big points from Tosun and Demirhan, were third with 43.5 points. 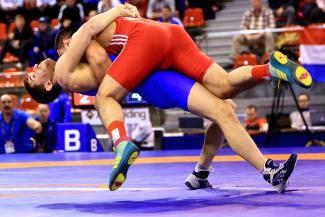 Nuriev, however, finished in fifth place at 98kg at the recent European Games and could be replaced by 2013 world and European cadet champion Soslan FANZIEV (96kg).

Furkan BAYRAK (TUR) is the junior world champ at 74kg and will try to atone for a loss to Bolkvadze in Katowice, where he had to settle for a bronze medal. Turkey’s only other Katowice medalist in Greco-Roman was bronze medal winner Dogus AYACZI (50kg).
Russia, which won the team title in Katowice with 59 points without an individual champion, returns two of six bronze medalists in Aleksey KINZHIGALIEV (50kg) and Arif MIRZAEV (55kg). World bronze medal winner Sergey EMELIN (60kg) also joins the Russian squad.

Georgia was second with 58 points and two champions with Azerbaijan was a distant third with 45 points despite three individuals champions.