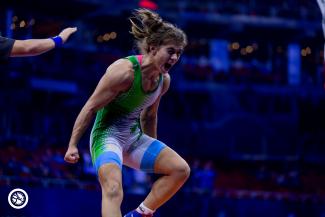 BUCHAREST, Romania (April 10) - Taybe YUSEIN (BUL) was one of two reigning world and European champion that competed on the fourth day of wrestling at the European Championships, but the Bulgarian was the only double defending champion who made it to Friday night’s finals. The second, Petra OLLI (FIN), was upset in the semifinals and will compete for a bronze medal on Friday night.

Yusein will wrestle Aurora CAMPAGNA (ITA), who's finals birth is a vast improvement on her ninth-place finish from a year ago. In her semifinals match, Campagna outlasted Sweden’s 2017 U23 world bronze medalist Moa NYGREN (SWE) in a nail biter, reaching the gold-medal bout with a 4-3 victory.

Tetyana KIT was one of three Ukrainian wrestlers who will compete on Friday night for a gold medal. (Photo: Gabro Martin)

Meanwhile, Ukraine, who sits in the lead after claiming three gold medals on Day 4 added three more finalists to their overall total, bringing the gold-medal participant total to six.

At 53kg, two-time U23 European champion Lilya Horshna halted Jessica BLASZKA (NED) from the becoming first-ever women’s wrestling European finalist from the Netherlands with a 6-1 victory.

Horshna will wrestle Russia’s returning European champion Stalvira ORSHUSH (RUS), who defeated 2017 world champion and No. 17-ranked Vanesa KALADZINSKAYA (BLR) at the European championships. Last year, Orshush beat Valadzinskaya in the finals, and this year, it was in the semifinals, where she picked up the 2-2 criteria win.

In the semifinals at 57kg, Kit was down 6-4 as time expired against Anastasia NICHITA (MDA), but a late successful Ukrainian challenge gave Kit the 6-6 win on criteria.

She’ll wrestle Hungary’s fifth-ranked Emese BARKA (HUN). Barka came out on top of her semifinals match against reigning European silver medalist Mimi Nikolova HRISTOVA (BUL), 11-3.  The Holland wrestler ended the opening three minutes with a 5-0 lead, and tacked on six additional points, inserting herself into the continental finals with the eight-point win.

Alina BEREZHNA STADNIK MAKHYNIA (UKR) will wrestle for a European gold medal for the fourth time in her career. She's walked away with a gold medal twice. (Photo: Martin Gabor)

In the 72kg semifinals, two-time champion Alina Berezhna Stadnik glued returning European bronze medalist Alexandra Nicoleta ANGHEL (ROU) back to the mat for the fall and will wrestle for a gold medal in the European Championships for the fifth time in her career.

The Ukranian wrestler will take on Anna Carmen SCHELL (GER), who was up 7-4 on No. 15 Tatiana KOLESNIKOVA MOROZOVA (RUS) when she picked up the fall.

The last finals match up that was settled was at 65kg.

The Day 5 finals begin on Friday at 18:00 (local time) and can be followed at www.unitedworldwrestling.org. 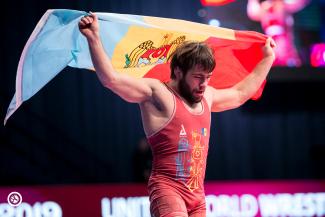 BUCHAREST, Romania (April 14) – Moldova’s Victor CIOBANU and Denmark’s Rajbek BISULTANOV reached the top of the European championship podium and made history for their countries on the closing day of the wrestling in Bucharest.

The Moldovan caught the Russian off balance in the opening period, capitalizing on a four-point offensive maneuver, and took the 4-0 lead into the second period. In the final period, the Russian fired back and gained the 5-4 lead, but a late stepout handed the Moldovan wrestler the 5-5 criteria advantage, and ultimately his nations first continental title.

And in the 82kg finals, Rajbek Bisultanov ended Denmark’s 93-year drought without a European gold medal, becoming the first wrestler from his nation to circle the mat with a Danish flag since Johannes JACOBSEN did so at the Riga European title in 1926.

Bisultanov fell behind 1-0 to Georgia’s Lasha GOBADZE (GEO), but scored two exposure points and a takedown, ending the opening frame with a 4-1 lead. In the closing period, the Danish wrestler was dinged for a caution-and-two but held on to win 4-3.

Russia, who entered Day 7 with a 34 point lead, extended their lead on the final day with their two champions, a second place finish from Sergey Emelin, and bronze medal wins from Artem SURKOV and Aleksandr KOMAROV.

In total, Russia closed out the European Championships with medals in nine of ten weight classes. They had five champions, a second-place finisher, and three bronze medal winners.

Turkey, who finished in second place with 132 points, finished the day with a solo champion, a runner-up finish from Cengiz ARSLAN, and bronze medal finishes from Kerem KAMAL and Emrah KUS.

Turkey’s Day 7 champion, Atakan YUKSEL, gave his country their second gold medal of the weekend. Yuksel trailed for four and a half minutes but picked up an inactivity point, followed by a pair of exposures to win, 5-1, against Poland’s Gevorg SAHAKYAN.