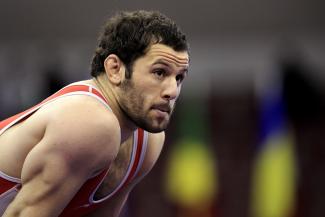 PORT HARCOURT, Nigeria (February 11) - Akrem BOUDJEMLINE (ALG) derailed Zied AIT OUAGRAM (MAR), the two-time Olympian and nine-time African champion from bringing his African gold medal count into double digits. The last time Ait Ouagram was defeated at the African championship was ten years ago when he walked away with the bronze medal.

Boudjemline, now a two-time champion was able to build a 5-0 lead heading into the second period and hold off a flurry of attacks from Ait Ouagram, ultimately winning the 77kg title on criteria, 5-5.

Radhouane CHEBBI (TUN), the two-time Olympian easily handled the competition on his way to becoming a four-time African champion. In his four matches, Chebbi didn't surrender an offensive point and outscored his 125kg opponents 27-0.

The 55kg champion, Abdelkarim FERGAT (EGY), 2015 Arab Championship competed for the first time since 2015. He compiled a 3-0 record, outscoring his opponents 21-0.

Adem BOUDJEMLINE (ALG) improved on his second-place finish from a year ago by beating Udeh Tobechukwu JOSEPH (NGR) in the 86kg gold medal bout.

The battle at 97kg between two Olympians was owned by Hemza HALOUI (ALG) as he continued his unscored upon streak for the third match in a row, besting Choucri ATAFI (MAR), 7-0. This was Haloui’s fifth finals appearance but his first championship performance.

Women’s Wrestling
Blessing OBORUDUDU (NGR), the two-time Olympian hasn’t suffered a loss at the African Championships since 2009 but found herself down 3-0 to Anta SAMBOU (SEN) in the 68kg finals. Oborududu ended the first period on a 10-0 run and finished the match with two takedowns in the second period to cap off her 14-0 run, bringing her African Championship gold medal count to eight.

Moving to 53kg, Bose SAMUEL (NGR) finished the day with a 4-0 record which included a 9-1 win over four-time defending African champion, Maroi MEZIEN (TUN). Samuel finished the day scoring 33 offensive points while only giving up a single point.

In the only match of the day at 55kg, Ifeoma NWOYE (NGR) bettered her second-place finish from last year by defeating 2015 African cadet gold medalist, Aten HAMMAMI (TUN), 10-0.

Odunayo ADEKUOROYE (NGR), 2017 world silver medalist finished the day at 57kg with a 3-0 record and outscored her opponents 27-0 on her way to capturing her fourth African crown.

In the lone match of the day at 62kg, Olympian Aminat ADENIYI (NGR) became a three-time African champion with a 10-0 win over African Championship bronze medalist, Lilia MEJRI (TUN).

Olympian Hannah RUEBEN (NGR) showed her dominance at 65kg by lighting up the scoreboard with 35 offensive points during her four matches.

Winnie GOFIT (NGR), last year’s champion defended her title by going 2-0 on the day, outscoring her opponents 18-0 on her way to capturing the 72kg title.

Rounding out the women’s wrestling finals was Samar Amer IBRAHIM (EGY) who captured the African Championship at 76kg by going 2-0 on the day.