Bonne, Bacsi and Gray Named Comeback Athletes of the Year

In the quarterfinals, Bonne trailed Iran’s Mohammadbagher YAKHKESHI by two points with five seconds left when he hit a four-point inside trip and stole the match, 10-8.

Then, in the finals, Bonne trailed Russia’s Gadzhimurad RASHIDOV  2-0 before scoring a massive five-point move, which ultimately catapulted him to the top of the podium with a 5-5 criteria win.

This was Bonne's third world medal, previously finishing up the 2014 and 2017 World Championships with bronze medals.

Peter Bacsi, the 35-year-old Hungarian, won his first world championship since 2014 earning himself this year's Greco-Roman Comeback Athlete of the Year.

Basci trailed Turkey’s Emrah KUS 3-0 in the 82kg gold medal bout but scored four unanswered points to give the host nation their first and only gold medal of the Budapest World Championships.

The 2018 World Championships were rumored to be Bacsi’s last, but after his surprise victory he didn't rule out the 2019 Astana World Championships, though he did confirm he will not be making a run for Hungary’s 2020 Tokyo Olympic team.

Adeline Gray (USA) was named the women’s wrestling Comeback Athlete of the Year after returning from a year absence to win her fourth world title.

In the semifinals, Gray edged Wiebe, 3-1, and wrapped up the gold-medal bout early with a 13-1 win over Adar, winning the gold medal in a weight class that featured eight previous world champions.

The next award to be released will be the Outstanding Performances of the Year, which will come out on Thursday. CORSIER-SUR-VEVEY, Switzerland (December 3) -- Just like they dominated the show in Tokyo, Japan and USA highlight the women's wrestling top rankings.

Earlier, United World Wrestling announced winners of the 10 weights each of freestyle and Greco-Roman.

As women's wrestling continues to be the priority of UWW, it had announced equal prize money for all wrestlers. A total of $600,000 was announced for 90 wrestlers, 30 from each style, based on a ranking system that honors the most active wrestler throughout the season.

In 2019, nine wrestlers were awarded prize money but UWW's emphasis on putting athletes first made it expand to 90 and the prize money from around $200,000 to $600,000. The 2021 prize money combines the amount that was reserved for 2020 but was not distributed due to the impact COVID-19 had on the competition. 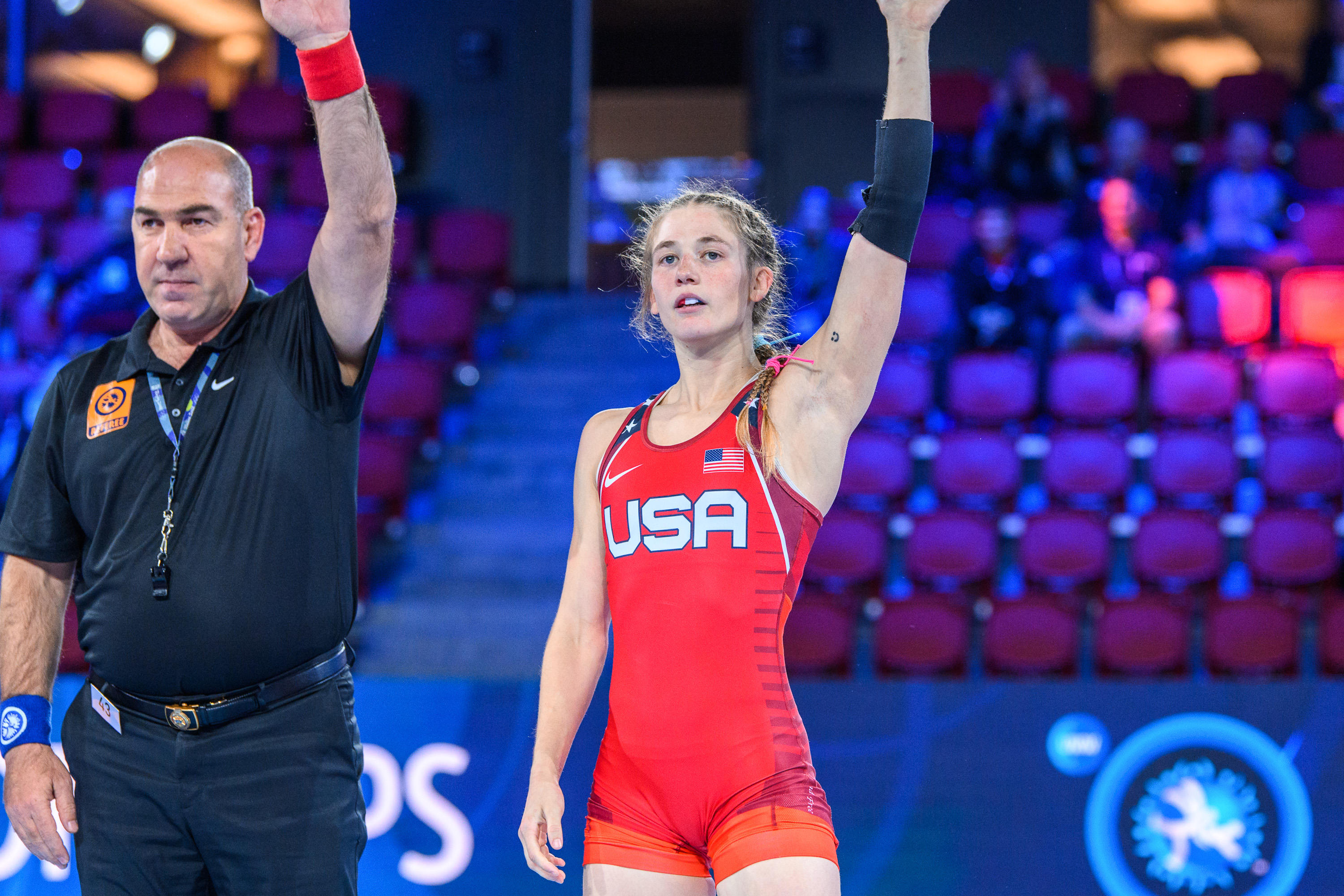 Three Olympic medalists feature in the top-three list at 50kg with bronze medalist and 2021 World Championships silver medalist Sarah HILDEBRANDT (USA) claiming the top spot. With her bronze in Tokyo, the USA wrestler collected 26 points and the silver medal in Oslo added 38 more. The 18 other points for her came from the gold she won at the Pam-Am Championships to complete 82 points.

ith 68 points. All her points came from the gold-medal winning performance at home in Tokyo.Four-time Olympic medalist and bronze in Tokyo Mariya STADNIK (AZE) began her season with 18 points with a gold medal at European Championships and then 16 more at the Poland Open ranking event. She added 26 more for the bronze medal in Tokyo which took her total to 60 points. 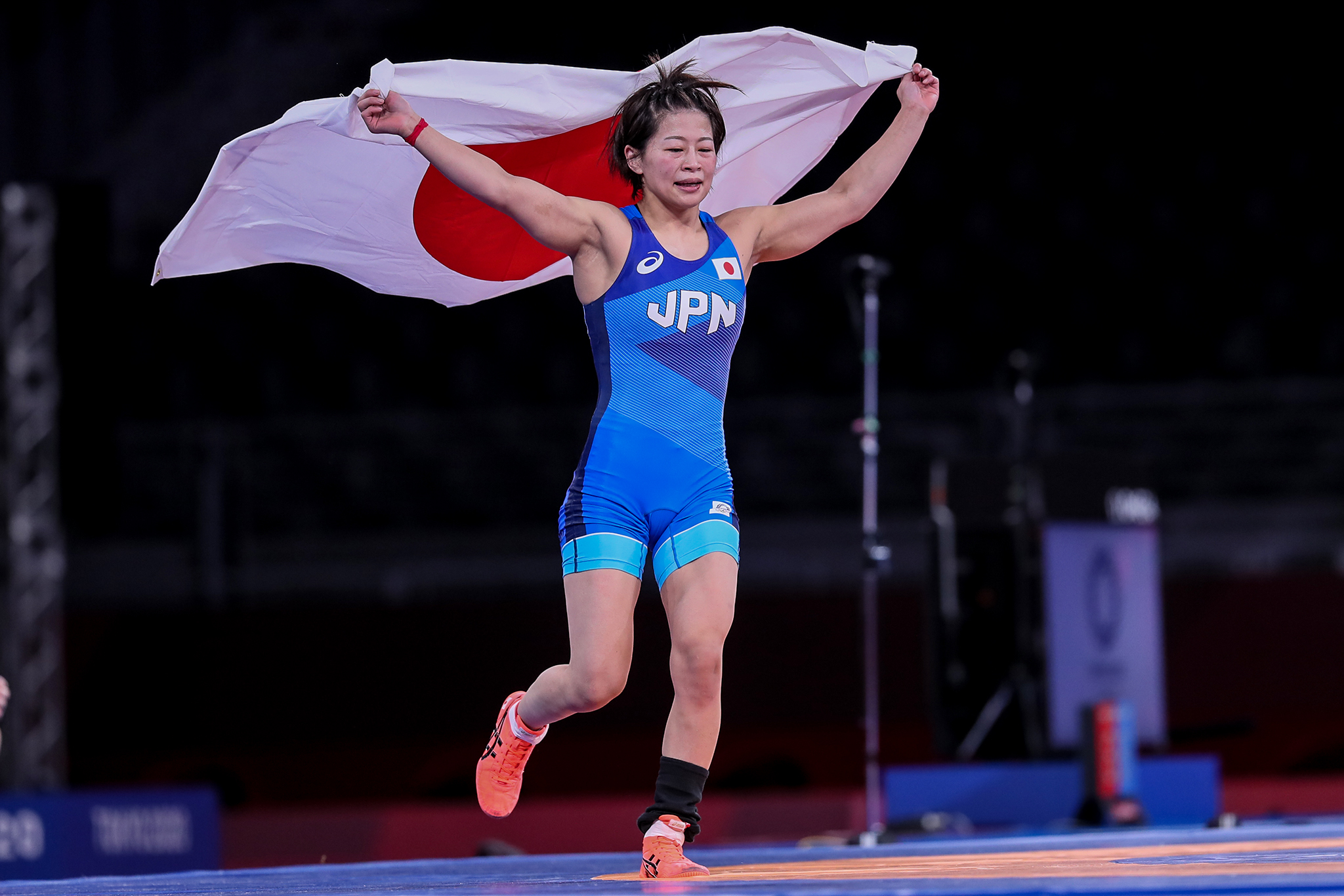 Olympic champion at 53kg Mayu MUKAIDA (JPN) finished at the top with 68 points. Just like her teammate Susaki, she collected all her points from the gold medal win in Tokyo.

Her rival Vinesh PHOGAT (IND) finished with 58 points to claim the second point. She finished with gold medals at the Rome ranking event, Asian Championships and Poland Open ranking and received 14 points, 18 points and 14 points respectively.

From the Olympics, she finished a lowly ninth and collected only 12 points from Tokyo Games.

In a rare instance, a second Japanese wrestler finished in the top three as world champion Akari FUJINAMI (JPN) finished with 58 points. She was level with Phogat but the latter wrestled at the Olympics, Fujinami finished lower than Phogat.

All her points were collected at the Oslo World Championships in which she had a dominant 41-0 run. 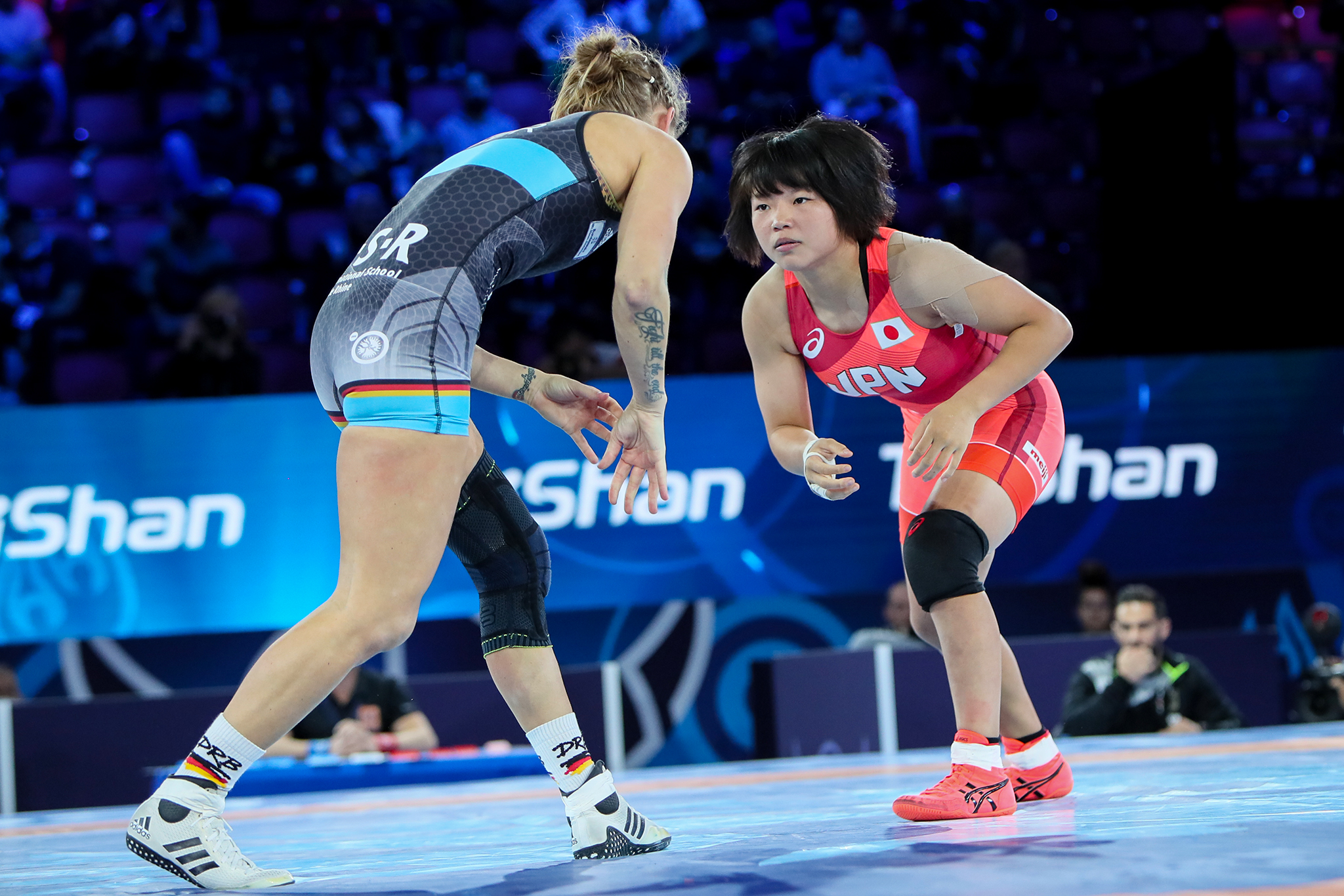 Japan had a world champion at 55kg as well in Oslo and Tsugumi SAKURAI (JPN) collected 58 points for that performance. She was only the second Japan wrestler to finish at the top.

U23 world champion Andreea ANA (ROU) finished second with 39 points accumulated over three tournaments. She won a bronze medal at the European Championships and collected 16 points for that.

She also participated in the Poland Open ranking event and finished sixth. Since there were only seven wrestlers in the weight class in Warsaw, Ana's sixth position got her one point and six additional. That was followed by a seventh-place finish at the World Championships which gave her 16 more points, taking her tally to 39 points. 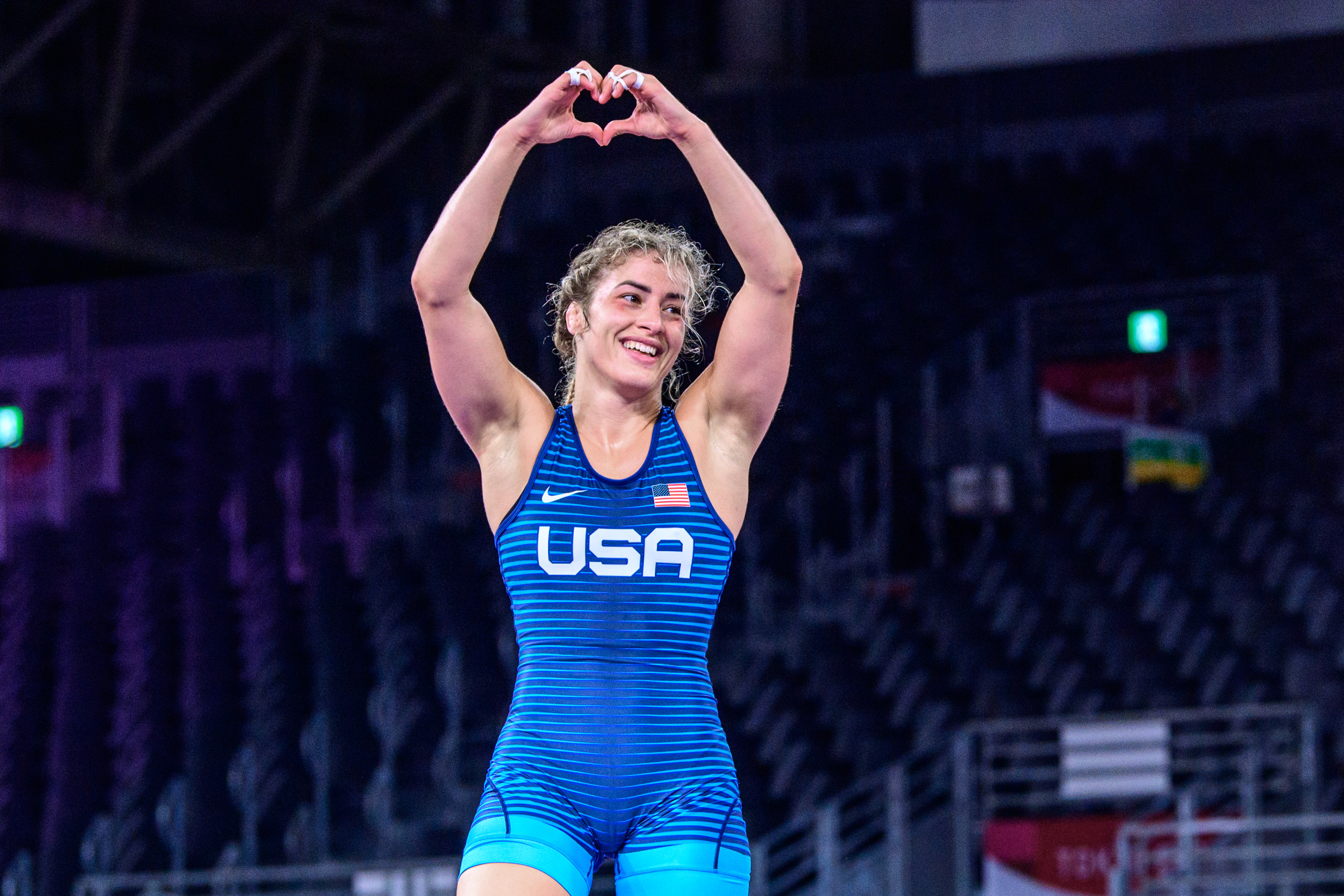 She could not win her second Olympic gold medal but Helen MAROULIS (USA) won a bronze medal in Tokyo and won the gold at the World Championships to finish at the top of the ranking at 57kg. She got 26 points for the bronze in Tokyo and followed that with 58 in Oslo.

Bronze medalist in Tokyo Iryna KURACHKINA (BLR) was eight points behind Maroulis to finish second with 76 points. The European champion began with 20 points at the continental championships for her gold medal followed by a second-place finish at the Poland Open ranking and Olympics Games.

For Poland Open, she got 12 points while for her silver in Tokyo, she received 44 points taking her to 76 points.

Anshu MALIK (IND) also finished with 76 points but her performance at the Olympics was below Kurachkina's silver. Malik was fifth at the Matteo Pellicone ranking event collecting eight points. In April, she became the Asian champion and got 18 points for that performance.

The former cadet world champion finished ninth at the Olympics but still managed to collect 12 points from Tokyo. But her big boost came when she won the silver at the World Championships, adding 38 points to her total. She lost to Maroulis in the final in which a win would have taken the Indian to the top spot. 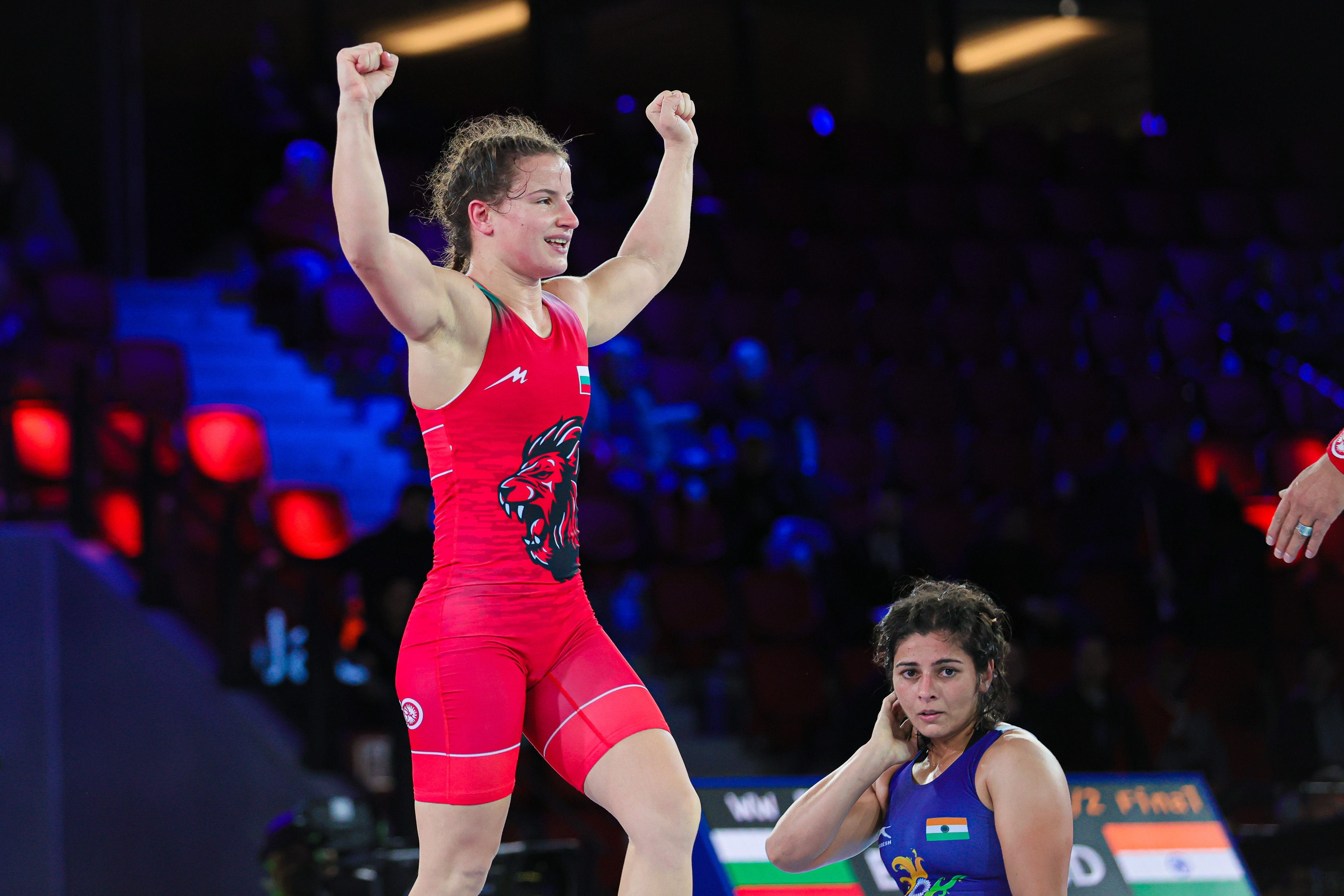 Bilyana DUDOVA (BUL) could not have asked for a better finish to the year. She won the European Championships in Warsaw to start with 18 points but became the world champion in October to add 58 points and jump to the top spot at 59kg.

Sarita MOR (IND), just like Dudova, won the continental in Asia but failed to win the Worlds gold. As a result, she finished second in the ranking. She collected 18 points from the win at the Asian Championships and 23 from the bronze medal at the World Championships. 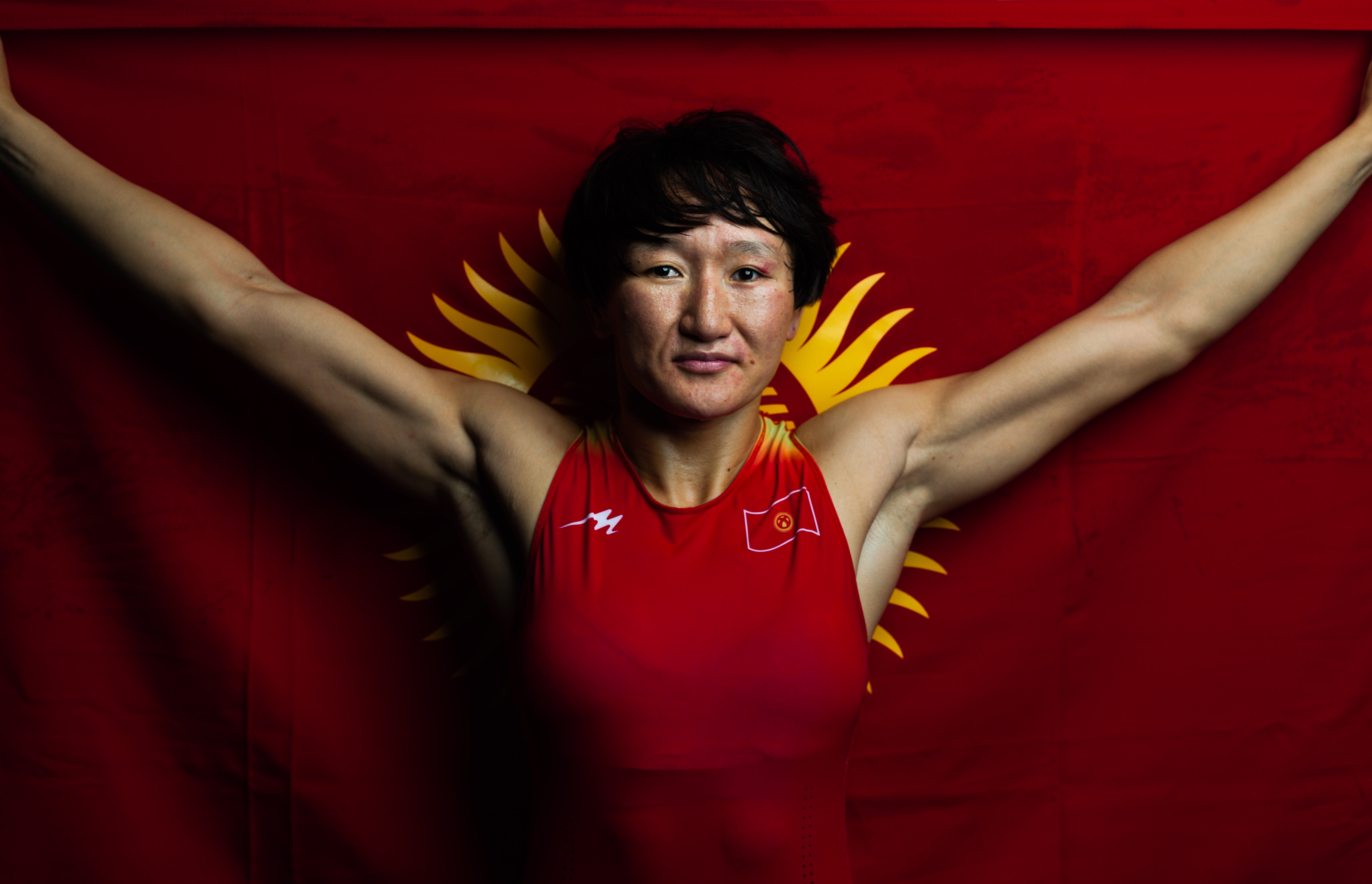 She became the Asian champion in April to begin her rankings with 18 points and later finished with a gold medal at the Poland Open to add 16 more.

At the Olympic Games, she won a silver medal which helped her get 44 more points to take her total to 78 points. At the World Championships, she defended her title from Nur-Sultan and added 58 more points to extend her lead and claim the top spot.

Tokyo Olympic champion Yukako KAWAI (JPN) defeated Tynybekova in the final and her gold medal got her 68 points, enough to finish at the second spot and collect $7,000.

Kayla MIRACLE (USA) finished second to Tynybekova in Oslo and her silver medal-winning performance got her 38 points. She also won the Pan-Am Championships before Worlds which had given her 18 points. 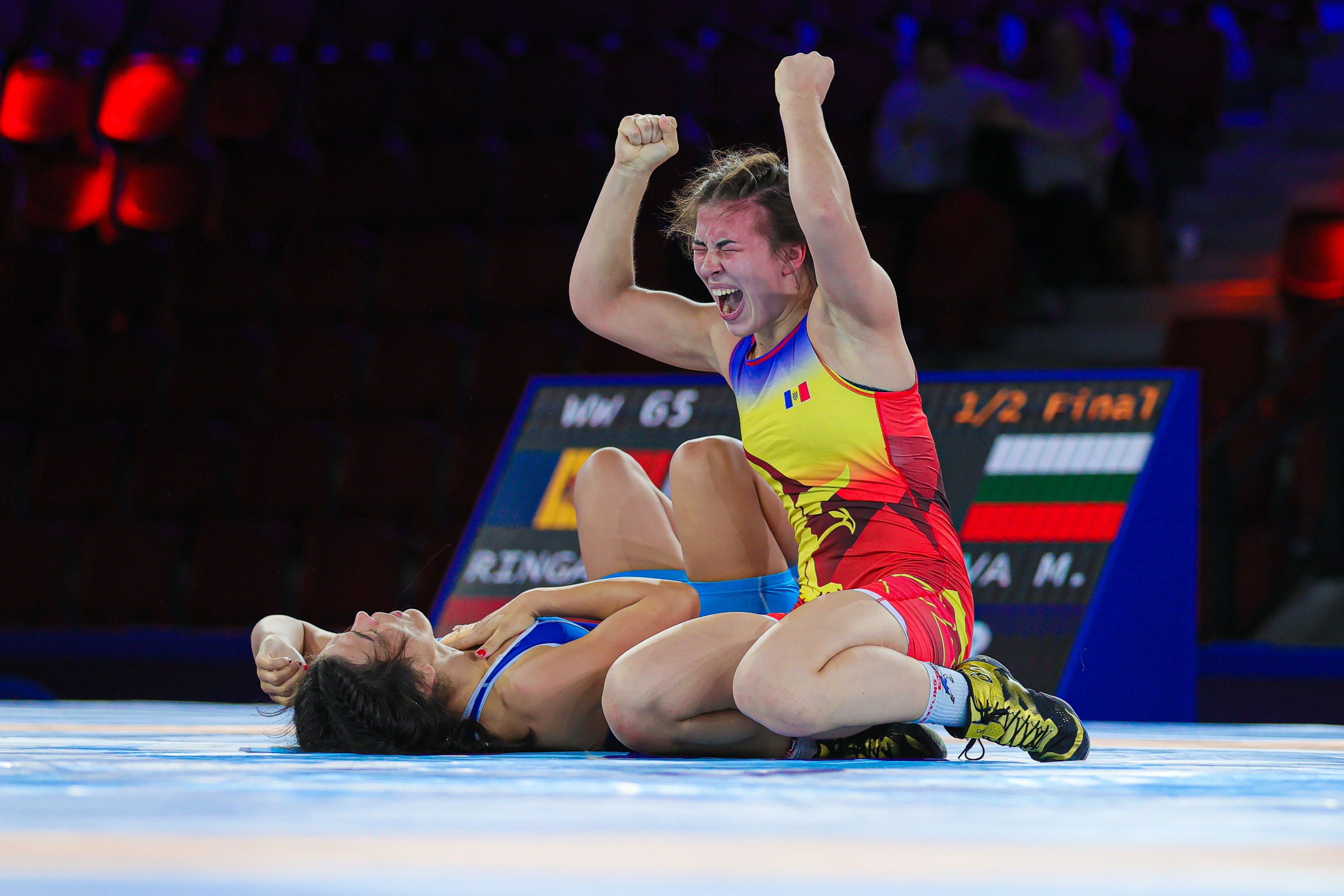 Moldova's first-ever world champion in women's wrestling Irina RINGACI (MDA) jumped to the top spot with her gold medal. She got 58 points for winning the gold in Oslo after she won the European Championships. The gold in Warsaw was worth 20 points.

Second to Ringaci in Oslo, Miwa MORIKAWA (JPN) finished the rankings with 38 points, all collected via the silver medal.

Kazakhstan's Gaukhar MUKATAY (KAZ) finished third with 26 points. She did not participate in the Olympics or World Championships but won the Matteo Pellicone ranking event to collect 14 points and her fifth-place finish at the Asian Championships gave her 12 more. 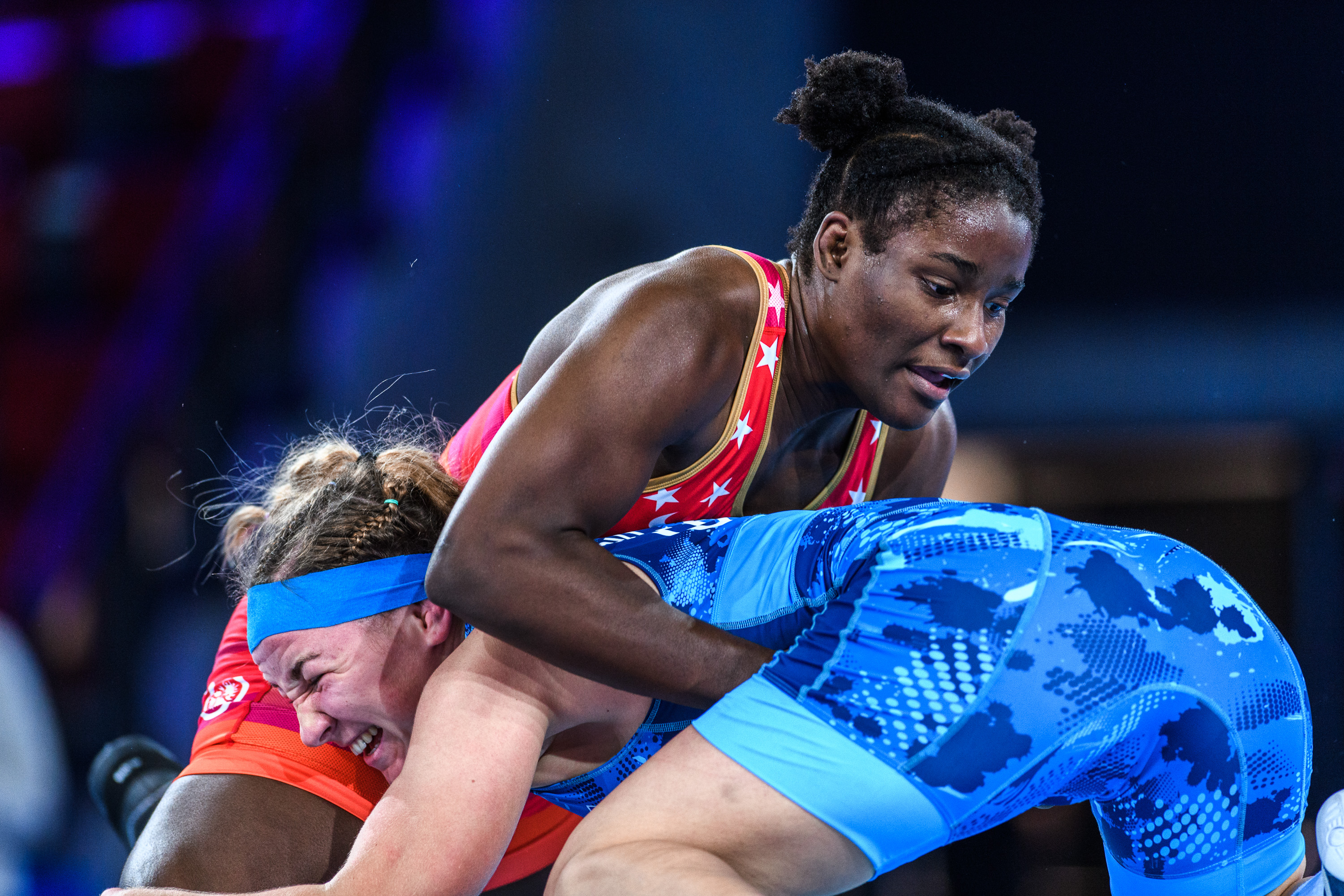 She suffered a shock defeat at the World Championships but Olympic champion Tamyra MENSAH STOCK (USA) finished at the top of the rankings at 68kg. She won gold medals at the Matteo Pellicone ranking event for 14 points, gold at the Pan-Am Championships for 18 points and gold at the Olympics Games for 68 points.

She managed to finish with a bronze at the World Championships which added 23 more points to her tally taking it to 123 and safety.

Her bronze at the Olympic Games added 26 more points to her account before the big step up happened when she won the gold medal in Oslo for 58 points and jumped to 114 points in total.

Since Africa Championships could not be held in 2021, points from 2020 were carried over and Oborududu had finished with gold last year for 18 points. 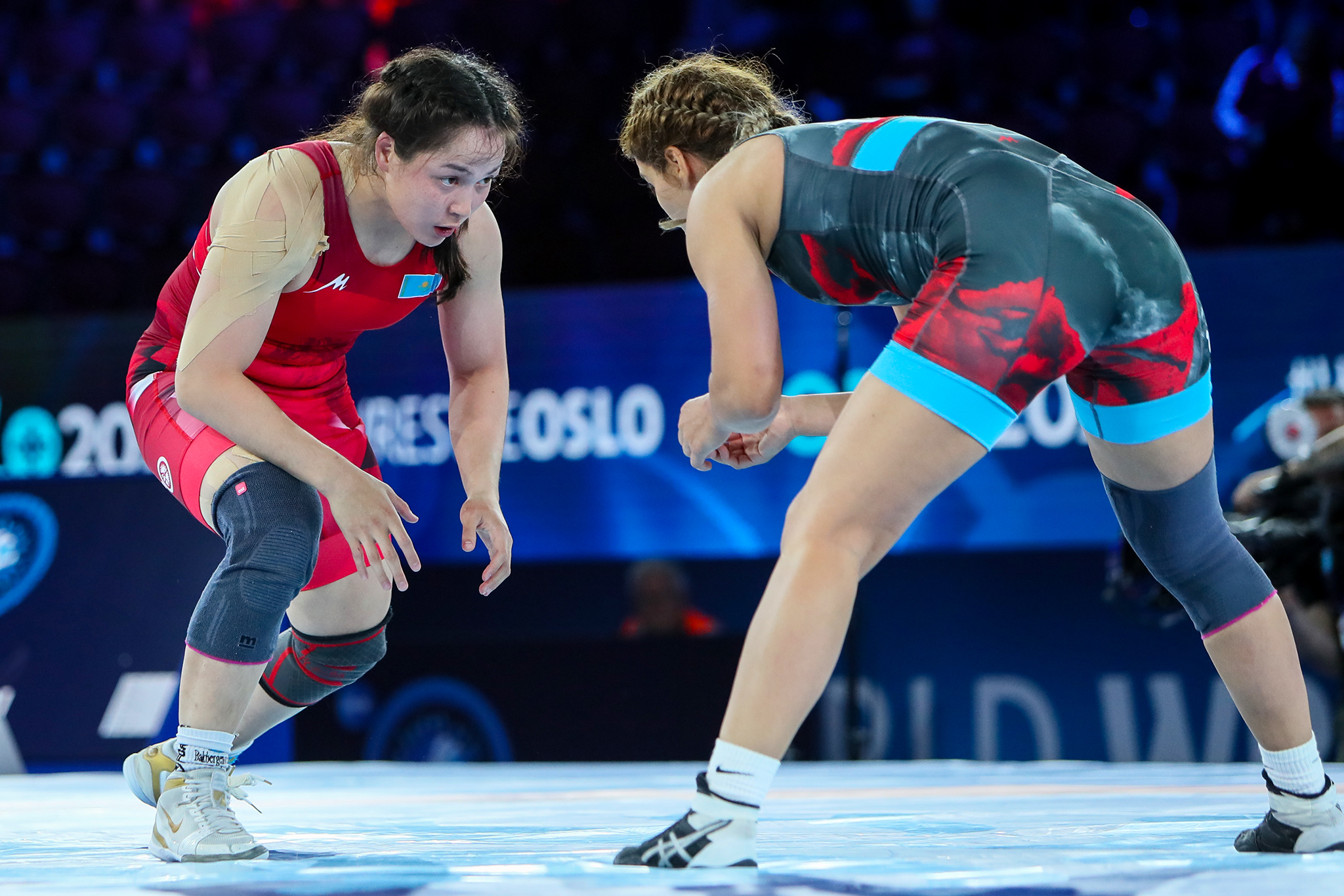 One of the most active wrestlers in women's wrestling in 2021 was Zhamila BAKBERGENOVA (KAZ) and for her efforts, she managed to claim the top spot at 72kg. She won a silver medal at the World Championships which gave her 38 points.

Before that, she had gold at the Matteo Pellicone ranking event for eight points followed by a silver-medal finish at the Asian Championships for 16 points. She also participated in the Poland Open ranking event and received 10 points.

World champion in Oslo Masako FURUICHI (JPN) collected all her 58 points from the Oslo event and finished in the second spot.

A bronze medal at the World Championships and silver at the Poland Open ranking event helped Buse TOSUN (TUR) collect 23 and 12 points respectively to finish third. 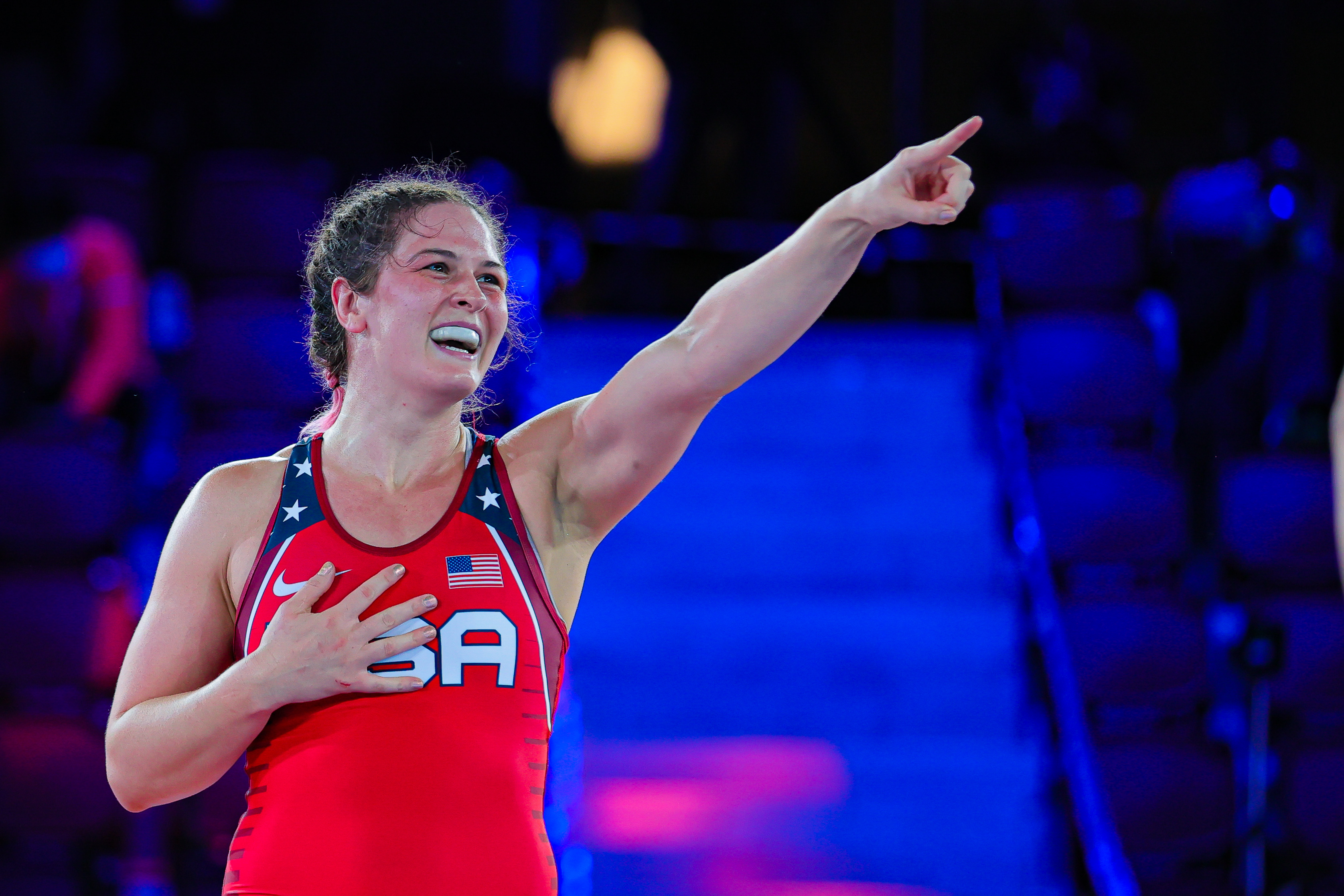 Focken began the year with a bronze medal at the European Championships which helped her get 16 points while a month later Adeline GRAY (USA) won the Pan-Am Championships and collected 18 points.

Focken took the lead when he added a gold medal at the Poland Open ranking event for 16 points while Gray did not participate in the event.

At the Olympics, Focken and Gray reached the final. The German stunned the six-time world champion Gray in the final to win the gold medal. That gold gave Focken 68 points while Gray received 44 points for the silver medal.

Before the World Championships, Focken had 100 points while Gray stood at 62 points. But Gray won a record-breaking sixth world title in Oslo to add 58 more points to her tally and overtook Focken with 120 points in total to finish at the top.

European champion Epp MAEE (EST) had a historical year with a continental title and a World Championships finals appearance for Estonia.

Her gold in Warsaw saw her collect 20 points and she returned to the same city for a silver medal at the Poland Open for 14 more points. At the Olympics, she finished eighth but got 14 points for that performance.

She registered a jump of 38 points when she created history for her country by reaching the final in Oslo and finishing with a silver medal.

The 2022 ranking season will begin with the Matteo Pellicone ranking event in Rome from February 3 to 7 followed by the second event – Yasar Dogu – in Istanbul, Turkey from February 24-28.