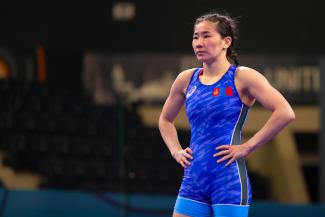 12:50: At 97kg, Magomed IBRAGIMOV (UZB) and Batyrbek TCAKULOV (SVK) fighting for a spot in the semifinal. Tcakulov with a quick takedown and two exposures. He then gets a cradle and secures the fall. Tcakulov is a U23 World silver medalist and even a senior Russian champion at 92kg. He switched to Slovakia and won a bronze at the European Championships this year.

12:45: Olympic bronze medalist Bolortuya BAT OCHIR (MGL) gave up four points in the first period against Leyla GURBANOVA (AZE) but she works her way back to pick a fall at 53kg and enter the final.

12:30: Amirhossein FIROUZPOUR (IRI) worked his way to a big win over Mukhammadrasul RAKHIMOV (UZB). He did give up two takedowns but continued working with pressure and won 15-4.

12:20: World champion Amir ZARE (IRI) against world bronze medalist Lkhagvagerel MUNKHTUR (MGL). Slow start to the bout as Munkhtur is called passive. Zare leads 1-0. Munkhtur is called for a second passive in the second period. He trails 2-0 now. Zare tries to get his takedown but only manages a stepout. He leads 3-0 and wins with the same scoreline.

12:00: We are beginning with the semifinals in a short while. Big matches all around.

11:45: World bronze medalist Lkhagvagerel MUNKHTUR (MGL) had a tough time navigating Alisher YERGALI (KAZ) at 125kg. He led 3-0 but Yergali scored a takedown and almost had another point for the win. But Munkhtur holds on.

11:30: Sarita MOR (IND) looks in top form. She wins 11-0 against Diana KAYUMOVA (KAZ) to book her spot in the semifinals at 59kg. She will be looking to move on from her bronze medal finish at the Asian Championships

11:25: Amirhossein FIROUZPOUR (IRI) and Akezhan AITBEKOV (KAZ) were involved in a fierce battle. Firouzpour is moving up to 97kg from 92kg for the first time. Aitbekov had a 3-1 lead but Firouzpour manages to crawl back and win 8-3. Not the perfect bout for him but he will take it.

11:10: Tokyo Olympian Elis MANALOVA (AZE) is in top form here. She has leg laced her way to the semifinals. She first defeated MANISHA (IND) and then Dinora RUSTAMOVA (UZB) in the same fashion

11:00: Zhamila BAKBERGENOVA (KAZ) begins her quest at the home Ranking Series event with a 10-0 win against Svetlana OKNAZAROVA (UZB) at 72kg.

10:30: Welcome to the third day of the Ranking Series here in Almaty. With a sudden change of weather, it's windy and rainy here.