Bajrang Storms Back to Regain Asian Title at 65kg; Iran Captures 3 of 5 Golds 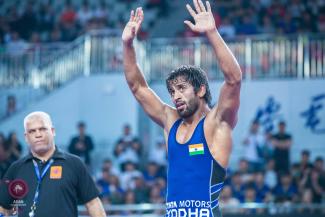 XI’AN, China (April 23) – World silver medalist Bajrang BAJRANG (IND) needed one of his trademark comebacks more than ever. His winded opponent gave him the opening he needed.

Bajrang, overcoming a five-point deficit in the second period, stormed to a 12-7 victory over Sayatbek OKASSOV (KAZ) in the freestyle 65kg final at the Asian Championships in Xi’an to regain the continental title he won two years ago in New Delhi.

Meanwhile, Iran captured three of the five golds at stake on the opening day of the six-day competition—and added bronze medals in the two other weight classes--while Kazakhstan also had a champion crowned.

Bajrang looked to be heading to defeat when Okassov got the Indian’s leg in the air three times, and scored a takedown each time to build up a 7-2 lead early in the second period.

But Okassov started to show fatigue, and Bajrang started twisting the screws. In the last 1:40, he went ahead with a takedown that he followed up with three rolls to put away the match.

“I didn’t feel like I was losing,” Bajrang said. “If you see my matches, I start a bit slow, then I catch up. I gain an understanding of the strategy of the opponent.”

Bajrang acknowledged that he uses his exceptional stamina to his advantage, saying, “I tire the opponent out and score points after that.”

Bajrang’s personal coach for the past year, Greek-born Georgian Shako Bentinidis, expressed concern over the technical lapses in Bajrang’s performance.

“I mind,” Bentinidis said. “The last month, we stayed in India and he had a little problem with the food and [training] partner. That’s why his concentration here was no good.”

But Bajrang’s determination was enough to allow him to prevail. “He has a very good character,” the coach said. “He never thinks about losing, only concentration on winning.”

Although he vanquished all before him on this day, Bajrang felt something was missing. Or someone for that matter.

Takuto OTOGURO (JPN), who defeated Bajrang in a memorable final at the Budapest 2018 world championships, had entered the tournament, but pulled out due to bursitis in his knee.

“All of the athletes here I had already defeated. Only Otoguro I have not. I would have liked to face him,” said Bajrang, who is hoping for a rematch at either this year’s world championships or Tokyo 2020.

Two-time former world champion Reza YAZDANI (IRI) returned from an absence of over two years to win the 97kg gold with a come-from-behind win of his own. He has some unfinished business to attend to at the Tokyo Olympics.

Yazdani twice missed out on Olympic medal, at London 2012 and Rio 2016, after suffering injuries during the competition, and he sees Tokyo as his chance for redemption.

“Unfortunately, I lost two times at the Olympics because I was injured,” Yazdani said. “Now I want to make up for that in Tokyo in 2020. I tried to keep myself fit, watch my weight and train for wrestling, and now I’m back on the national team.”

In the final, Yazdani trailed ULZIISAIKHAN Batzul (MGL) 4-2 in the second period when the Mongolian ran out of gas. Yazdani took advantage and went on to win 7-4, adding to the Asian titles he won in 2010 and 2016.

“The match is six minutes,” said Yazdani, a three-time Asian Games champion. “Sometimes I go down [in the score], and sometimes I go up. I am always training to be in better condition.”

Iran’s other golds came from Reza ATRINAGARCHI (IRI) at 57kg and Bahman TEYMOURI (IRI) at 70kg.

Atrinagarchi scored all of his points in the second period in posting a 9-3 victory over defending champion KANG Kumsong (PRK), who had defeated former world champion Yuki TAKAHASHI (JPN) in the semifinals.

Takahashi, a bronze medalist at the Budapest 2018 world championships, shook off that loss to take a bronze home, scoring a 4-point takedown-and-roll combination with 15 seconds left to defeat Kumar RAVI (IND), 5-3.

“It’s tough to take, but it gives me an idea of where I stand now, and I have to accept that,” Takahashi said of his loss. “But this [tournament] was not my goal. If this were the world championships or Olympics, I would be more disappointed. I have to not let this get me down and keep fighting to get a gold medal.”

Speaking about his 3-1 loss to Kang, Takahashi said, “The opponent was very good. He doesn’t have a strong attack, but his defense is strong. My strong point is offense, but today my offense lost and that was the result. I have to get stronger on attack. Of course, I want to get revenge.”

Teymouri, a 2017 bronze medalist, earned his first Asian gold with a sedate 3-0 win in the 79kg final over Parveen RANA (IND). Teymouri scored a first-period takedown, then received a penalty point in the second.

Nurkozha KAIPANOV (KAZ) reached the top of the podium at 70 with a 9-0 shutout win over Japan's Kojiro SHIGA. (Photo: Sachiko Hotaka)

Host China had three wrestlers in the bronze-medal matches, but only YUAN Shaohua (CHN) made the podium after he crushed Abdullrahman IBRAHIM (QAT) with a 10-0 technical fall in just 34 seconds.

Peiman BIABANI (IRI) at 65kg and Yones EMAMICHOGAEI (IRI) at 70kg added to the Iranian medal tally by winning bronzes.

XI’AN, China (April 28)—Having seen his younger brother win a gold medal the day before, Islomjon BAKHRAMOV (UZB) did what comes naturally to a sibling. Wanting what he has.

Bakhramov made it two golds in the family when he captured the 60kg title as the Asian Championships finished up with competition in five Greco-Roman finals on the sixth and final day in Xi’an.

Bakhramov defeated RI Se Ung (PRK) by a 12-4 technical fall, avenging a loss in the semifinals at last year’s Asian Championships in Bishkek, where he had to settle for a bronze medal.

“Two brothers in one sport is very excellent,” Bakhramov said. “We motivate each other. If the younger brother wins a medal, why shouldn’t the older brother also win? If he wins, I must win.”

Meanwhile, Mohammadreza GERAEI (IRI) and Saeid ABDVALI (IRI)—who also had brothers competing in Xi’an, both of whom won bronze medals—cruised to the 72kg and 82kg titles, respectively, to help Iran capture the team championship by just two points ahead of Uzbekistan.

The title race came down to the final match of the tournament, and a 3-2 victory by Uzur DZHUZUPBEKOV (KGZ) over Jahongir TURDIEV (UZB) in the 97kg final left Uzbekistan two points short of Iran, which won with 165 after securing four golds and three bronzes.

Kazakhstan was third with 134 points, mainly on the strength of six bronze medals.

In a never-a-dull moment 60kg final, Bakhramov got the advantage first in the par terre position and executed a roll for a 3-0 lead. But Ri, who knocked off 2017 world champion Kenichiro FUMITA (JPN) and world bronze medalist Sailike WALIHAN (CHN) en route to the final, came back with a 2-point back drop.

Bakhramov replied with a twisting head lock for two points, but Ri struck back with a 2-point head lock throw to cut the gap to 5-4.

In the second period, the Uzbeki padded his lead with a takedown and 1-point leg-grab penalty. With the seconds ticking down, Ri made a last-ditch leap for a score, but landed on his back, giving Bakhramov four points and the technical fall at the buzzer.

“Last time I didn’t know him, what moves he would do,” Bakhramov said. “This time I was ready absolutely. I trained very well and was completely ready for this championships.”

For Ilkhom Bakhramov, seeing his older brother’s success only doubled the pleasure of his own.

“Yesterday when I won the [gold] medal, I was really happy,” he said. “But it was like 50 percent. Today, my brother also won, so that’s why it’s 100 percent. I was shouting and jumping.”

Geraei, who was third at the Asian Games last summer in Jakarta, earned his first Asian title with a solid 5-0 victory over ZHANG Hujun (CHN) in the 72kg final.

Geraei, whose older brother Mohammadali was third at 77kg on Saturday, scored a takedown in each period and was never really put in danger.

Abdvali, a former world champion and Rio 2016 Olympic bronze medalist, was even more dominant in putting away Singh HARPEET (IND) by 8-0 technical fall in 3:54, scoring two takedowns and four stepouts.

“My program to prepare for this championships was five months,” said Abdvali, who won all three of his matches by technical falls without surrendering a point to add a first Asian title to two Asian Games crowns. “At the competition, I was strong and ready.”

Advali said younger brother Saman, a bronze medalist at 63kg, had his chance for gold, too. “He made a mistake and that caused him to lose,” he said.

In the 97kg final, Dzhuzupbekov, who was third at both the Asian Championships and Asian Games last year, managed to roll Turdiev from the par terre position a minute into the second period to take a 3-1 lead, then held on for the victory.

The other title at stake on the final night at Xidian University’s Invengo Gymnasium went to RYU Hansu (KOR), who scored with a 4-point move with :46 left in the 67kg final to top world bronze medalist Meiirzhan SHERMAKHANBET (KAZ), 5-1.

With the wrestlers tied at 1-1 from passivity points, Ryu secured a body lock from the side, then twisted Shermakhanbet backwards and down for the big-point move that secured his third Asian gold.

“It’s something that I practice all the time,” said Ryu, a two-time Asian Games champion and 2017 world champion. “It came natural to me because I have done it so many times.”

Japan came away with a pair of bronzes from Fumita at 60kg and Shogo TAKAHASHI (JPN) at 67kg. Fumita, the 2017 world and Asian champion, won without a fight as Walihan defaulted their bronze-medal match due to a shoulder injury.

One of the more exciting matches of the evening program was a come-from-behind victory by Maxat YEREZHEPOV (KAZ) in an 82kg bronze-medal match.

Trailing Jalgasbay BERDIMURATOV (UZB) 5-0, Yerezhepov was in the process of being lifted for a roll, when he suddenly clamped down on his opponent’s arm to send him to his back and win by an unlikely fall at 2:02.