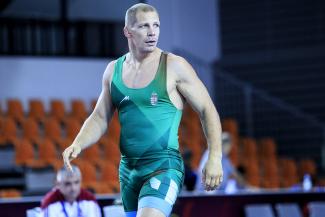 DORTMUND, Germany (August 23) - With only 56 calendar days left until the 2018 World Championships kick off in Budapest, Hungary, most countries have either finalized or are in the final stages of completing their World Championship rosters.

Considering the number of Hungarian hammers that were entered into last weekend’s Grand Prix of Germany, one can only imagine that Hungary is still looking to cement their rosters and has plans of using this tournament as one of the final deciding factors for their Greco-Roman squad.

Overall, Hungary had three of the possible ten champions. Most importantly, in two of those weight classes, wrestlers from Hungary met each other for the gold medal.

The first all-Hungary final was at 77kg where Zoltan LEVAI (HUN) knocked off three-time world and Olympic medalist, Tamas LORINCZ (HUN), 1-1 for the gold medal.

If Hungary was to select Levai over Lorincz, this would be the first time Tamas has missed out on making a World or Olympic team since stepping onto the senior level in 2006.

Also of note, two-time world champion Frank STABLER (GER) pulled out of the 72kg finals bout after making his return to the mat for the first time since winning his second world title. Stabler, who recently became a father was facing an upper-body injury that sidelined him for the better part of 2018. The reasoning for Stabler pulling out of the gold-medal bout is yet to be known.