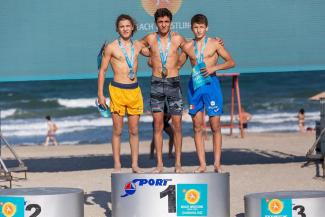 CONSTANTA, Romania (September 1) -- When Huseyn SEVDIMOV (AZE) was introduced to beach wrestling, he was unsure if he wants to pursue a career in the sport.

But that was a year ago. Just five months since his first practice, Sevdimov won the European Championships in July. He added a World Championships gold medal on Thursday to his resume and continued his exponential rise in beach wrestling.

"I am extremely happy about winning the gold medal at the World Championships," Sevdimov said. "I have been training for one year in the sand just for this competition."

It worked well for him as he won the five bouts with superiority [winning 3-0] or fall [a 3-0 win in], including one over Gaspard CHEYNOUX (FRA) in the gold medal bouts.

"I did not want to give any chance to my opponents to score on me," he said. "Now that I have won, I hope the other guys can win the gold medal as well."

After Sevdimov, three other Azerbaijan wrestlers won gold medals to sweep all the titles at the U17 World Championships at the Mamaia beach in Constanta, Romania.

At 60kg, Ziya GOYUSHOV (AZE) won the gold medal after beating Ionut TRIBOI (MDA), 3-0, in the final. He was as dominant as Sevdimov if not more than his compatriot.

Over the six bouts, Goyushov outscored his opponents 17-0 including a victory by fall.

It appeared Ilias KARNAVAS (GRE) will break the Azerbaijan streak as he the lead in the 70kg final against Vusal ALIYEV (AZE). But as the bout progressed, Aliyev composed him and scored a 3-1 win to win the gold.

At 80kg, Anar JAFARLI (AZE) won the gold medal after a tough final against Ion MARCU (MDA). Jafarli conceded a point and found it difficult to score but Marcu began losing steam which allowed Jafarli to get on the scoreboard. His continued pressure helped him win 3-1.

Earlier in the day, he had a thrilling Round 2 bout against Lars MICHAELSON (USA), winning 3-2. Michaelson took a 2-1 lead with a minute remaining but Jafarli used snap downs to win the bout.

Part of Azerbaijan's domination at the age-group level can be credited to its coach Oyan NAZARIANI (AZE), a former world champion in beach wrestling.

Nazariani runs the national training center in Baku and has built an indoor center as well to train wrestlers in the winter.

"I am happy to see our wrestlers win," Nazariani said. "We  trained in beach wrestling and to be world number one means it's the feedback of our good training."

Nazariani has been the leader of the sport in Azerbaijan, winning the gold at the 2018 and 2019 World Series and a bronze medal at the World Beach Games in Qatar in 2019. A hand injury has kept him out this season but he continued to train the young wrestlers.

"We train on the Caspian sea beach in summers and the indoor ring in winters," he said. "I tell them to focus on not touching knees and elbows and we hosted the national championships for the first time as well.

"If you ask them, they will say they are beach wrestlers and not just wrestlers." 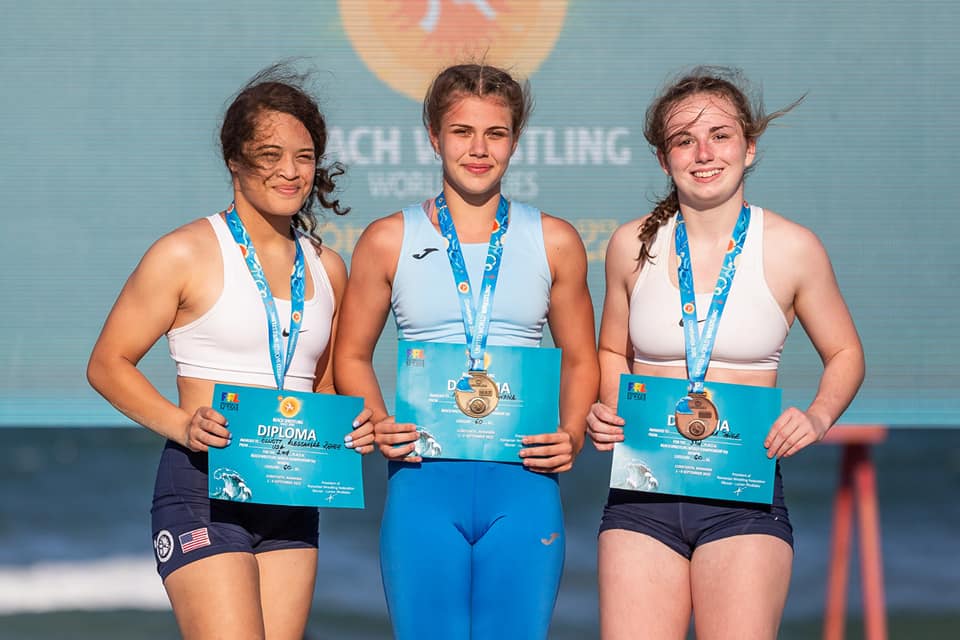 In the women's category, Romania won all four gold medals, claiming the team title as well. Such was its domination that Romania had seven finalists out of the eight.

At 40kg, Diana VOICULESCU (ROU) defeated Bianca IANCAU (ROU) even after giving up the first point. She used a three-point move to finish the final via fall.

Alexandra VOICULESCU (ROU) was the second gold medal as she defeated Ana ROTARU (ROU) in the 50kg final. In the full three-minute bout, Voiculescu won 2-0.

In the only final which did not have both Romanian wrestlers, Alessandra ELLIOTT (USA) tried stopping Florentina MANTOG (ROU) from winning the gold but the latter proved too strong and won the 60kg gold medal 3-1.

Marchenko wins gold for Ukraine; Romania best at U20 Worlds

CONSTANTA, Romania (September 2) -- When Romania hosted its national championships for beach wrestling, more than 800 wrestlers registered across age groups. Perhaps Romania is by far the most active country in the sport.

So it was no surprise when seven of the eight finalists at the U20 World Championships at the Mamaia beach in Constanta, Romania were from the host country.

Winning three out of the four gold medals, Romania ended the championships as the best team in the women's category, as it did at the U17 edition a day before.

The only non-Romanian wrestler who managed to win the gold on Friday was Sofiia MARCHENKO (UKR), winning the 60kg title after beating Viorica ADAM (ROU) in the final.

While Adam, a silver medalist from the U17 World Championships last year, was the favorite, Marchenko dug deep to upset the local in the final minute of the bout.

Surprised by the constant attacks from Adam, Marchenko took time to adjust to Adam's style. On a few occasions, Adam almost got the fall but Marchenko managed to defend the attempted throws.

After two minutes of no action, Adam got the first point but Marchenko answered with a takedown four seconds later. But since she had a caution against her, Adams led 1-1 on criteria.

But Marchenko remained calm and scored a stepout with just 18 seconds remaining to win the gold medal.

"The final match was tough," Marchenko said. "The girl [Adam] was really active. I was risking with the hip-toss, but I did everything right and won."

Marchenko finished ninth at the U17 Worlds where Adams won the silver but has been training for the championships and it paid off.

"I practice freestyle wrestling, but when it’s getting warmer in summer I practice beach wrestling," she said.

The 18-year-old showed her class in the semifinal as well when she defeated Ana PUIU (ROU) 3-2 in the semifinal. She took a 1-0 lead with a snap down in the first four seconds but Puiu countered with an ankle pick. As the bout neared its end, Puiu took the lead when Marchenko's knee touched the sand.

With 37 seconds remaining, Puiu was happy defending her lead but Marchenko scored via a strong snap. She ended the bout with another snap down.

'21 U20 world bronze medalist Ana PIRVU (ROU) upgraded her medal to gold this year as she won her four bouts at 50kg to remain undefeated.

At 70kg, Teodora SIRBU (ROU) defeated compatriot Paula ROTARU (ROU) 3-1 in the final to claim the gold medal. Sirbu had missed out on a medal last year but dominated the field on Friday to win her first world title in beach wrestling.

Drosoula TZIANAKOPOULOU (GRE) won the bronze medal after she beat Georgiana ANDRIES (ROU) 3-0. She won her second bronze in two days as she was a medalist at the U17 Worlds as well.

In the +70kg weight class, Elena MARGAS (ROU) pulled off a thrilling 2-2 win over Andreea SCARLATESCU (ROU) to win the gold medal.

Both wrestlers were tied 0-0 for the first two minutes before the referee penalized Margas for passivity. Scarlatsecu then scored a stepout to lead 2-0.

But Margas managed to get a point with five seconds remaining. She then got another throw in the final second to win 2-2.

Amalia RATUNZEANU (ROU) defeated Maren ANDERSON (USA) 3-0 in the bronze medal bout to ensure a sweep of the podium for Romania. 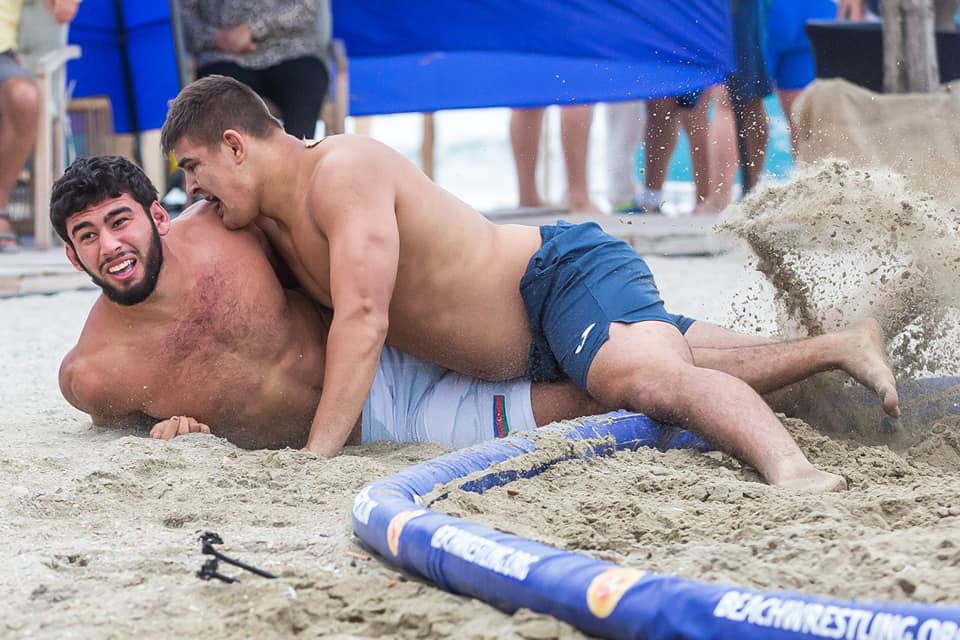 Like the women's category, Romania dominated the show in men's as well, winning three out of the four gold medals on offer.

At 70kg, Daniel SANDU (ROU) put the Round 1 loss against Alin CIORICI (MDA) behind him to reach the semifinals in which he defeated Rubail IBRAHIMLI (AZE) 3-2 in a close decision. Ibrahmili got behind Sandu and almost forced the Romanian's knee to touch the sand but his own knee touched first which gave Sandu the win.

In the final, he defeated Ion MARCU (MDA) 3-1 to be crowned champion, an improvement from his bronze medal at the U17 Worlds last year.

The final was expected to be a rematch between Sandu and Ciorici but in the semifinal, the Moldovan was tied 0-0 with Marcu. In such a case, the wrestler with lower weight wins. But both Marcu and Ciorici had the exact weight of 69.85kg.

As luck would have it, Marcu's draw number was lower than Ciorici which gave him the win over his teammate.

Ibrahimli bounced back in the bronze medal bout and defeated Ciorici 3-0 for the win.

At 80kg, Thor MICHAELSON (USA) looked in some form as he dominated his way to reach the semifinals against Ion MARCU (MDA). He was trailing 2-0 when he scored a three-point move to win and reach the final against Denis CHIRICA (ROU).

He once again came from behind with a lead 2-2 on criteria against Chirica but as he tried defending his lead with 10 seconds left, Chirica used a snap down in which Michaelson's knee touched the sand the Romanian won 3-2.

The Nordic bracket was followed at 90kg and Farid JABBAROV (AZE) emerged as the unbeaten wrestler after Round 5.

He began with a win against Razvan PAVALASC (ROU), followed by Alexandru OLTEAN (ROU) and David MITRAN (ROU). In Round 5, he defeated Konstantinos TSAKNAKIS (GRE) to claim the gold medal.

Oltean with three wins was the silver medalist while Pavalasc took home the bronze with two wins.

Azerbaijan could have won a second gold medal but Georgian TRIPON (ROU) defeated Zafar ALIYEV (AZE) in the +90kg final to deny it.

In a rematch of the Round 3 bout which Tripon won, 3-2, Aliyev tried to avenge that loss but Tripon was well prepared for the final which he won 2-1.