Azerbaijan and Russia Send All Five to Day Five Semifinals 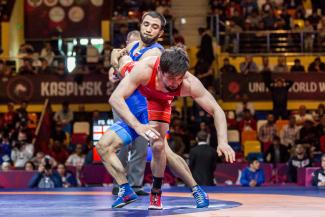 KASPIISK, Russia (May 4) - Azerbaijan and Russia ended session one undefeated at 2018 European Championships in Dagestan, Russia. Each nation will have five wrestlers represented in tonight’s semifinals which begin at 5:15 PM (local time).

Poland and Belarus each have a pair of wrestlers vying for a spot in tomorrow’s championship match, while six other nations will be represented by at least a solo competitor.

The highlight of the day came in what many consider to be the deepest weight class of the tournament, 65kg. Ilias BEKBULATOV (RUS), the 2017 65kg European Champion scored two takedowns and a counter exposure to shut out 2016 Olympic champion and reigning 61kg European champion, Vladimer KHINCHEGASHVILI (GEO), 6-0.

Also of note at 65kg, Slovenia’s David HABAT (SLO) picked up two wins and will wrestle three-time world champion Haji ALIYEV (AZE) for a spot in tomorrow’s #KaspEuro2018 finals. If Habat is able to pull out a win in tonight’s semifinals, he would be Slovenia’s first European finalist ever.

KASPIISK, Russia - (May 5) - Azerbaijani’s Giorgi EDISHERASHVILI (AZE) and Haji ALIYEV (AZE) stunned the sold-out Palace of Sport and Youth after picking up buzzer beater takedowns on Russian opponents to win European gold medals. But, the Russian's bounced back to win the final three gold medals on the sixth day of competition at the 2018 European Championships.

Edisherashvili, the back-to-back European champion seized his second crown with a lateral drop on the out of bounds line as he trailed the Russian by three points.

“Even if you’re losing, you don’t have a right to give up. You have to wrestle until the end of the match. I wanted to wait until the end to take a risk, and that's what I did, risked it all at the end.”

Magomed KURBANALIEV (RUS) gave Russia their first freestyle gold medal of the 2018 European Championships with a 3-1 win over Magomedmurad GADZHIEV (POL) at 70kg.

“The score wasn’t high because my opponent was very experienced. The luck was just on my side today.”

Kurbanliev, the 2016 world champion completed his run to his second European title by scoring three one point sequences. The 2014 European champion's lead was cut to 3-1 after being penalized for failing to score on the passivity clock but hung on to win his first European title in four years.

Akhmed GADZHIMAGOMEDOV (RUS) locked up back-to-back gold medals for the Russian Federation with a 6-3 victory over Germany’s Martin OBST in the 79kg gold-medal bout.

Gadzhimagomedov’s three-point first period proved to be the difference in the match as both wrestlers score three points in the final period.

“Magomed Kurbanliev, Abdulrashid SADULAEV (RUS) and I are good friends and are living in the same hotel room. I was very happy for Magomed, and I hope Abdulrashid wins tomorrow so we can have a gold room.”

Vladislav BAITCAEV (RUS) closed out the sixth day of competition with a 6-0 shutout over Belarus’ Aliaksandr HUSHTYN.

"Right now, I'm on top of my physical form like never before...I couldn't become a three-time runner-up, and this time I finally won the gold because of my coaches, family, and friends. We all won this together!"