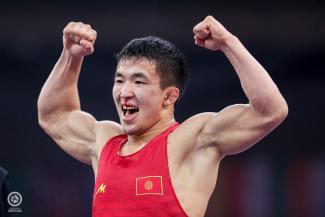 ALMATY, Kazakhstan (March 26) -- The final continental qualification event for the Tokyo Olympic Games, the Asian Olympic Qualifier, kicks off Friday (April 9-11) in Almaty, Kazakhstan. Over 200 athletes from 24 countries will attempt to qualify their nations for the Olympic Games with a top-two performance. 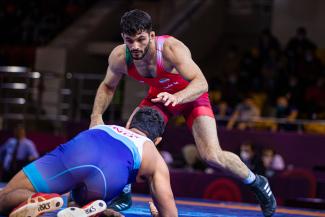 For superstar Hassan YAZDANI (IRI), the Asian Championships are just a stepping stone in preparing for his ultimate goal of winning a second straight Olympic gold medal in Tokyo. He rocked it anyway.

Hassan YAZDANI (IRI) proved once again he is in a class by himself, schooling Deepak PUNIA (IND) in their long-delayed first encounter to take the 86kg gold medal as the six-day tournament in Almaty concluded Sunday night with the last five finals in freestyle.

Yazdani, who won the gold in his only other Asian Championships appearance in 2018, was never in danger as he outclassed Punia with a 10-0 technical fall -- nearly two years after an inaugural meeting between them in the final at the 2019 World Championships in Nursultan was aborted when the Indian defaulted due to injury.

Prior to Almaty, Yazdani had not competed in an individual tournament since the 2019 worlds, and wanted to get in some mat time prior to the Tokyo Olympics, where he will defend the title he won at Rio 2016.

"After the pandemic started, it was hard to compete," Yazdani said. "I thought I would compete in the World Cup for preparation, but I did not," he said, referring to the Individual World Cup held in December last year in lieu of a World Championships.

"The Asian Championships was a good event and I wanted to see my preparations and now I will continue to prepare for the Olympics as a wrestler who will win the gold medal. Only the gold."

After Punia defaulted at the Nursultan Worlds due to an ankle injury suffered earlier in the tournament, many speculated on what might have been, given Punia's impressive run to the final just a year after winning a silver medal at the World Junior Championships.

But Yazdani is not called "The Greatest" for no reason, and it would take raising to another level to catch him off his game. For Punia, who looked sluggish at times en route to the final in Almaty, this was not the day.

Yazdani basically put on a takedown clinic, scoring four as Punia was able to resist all but one gut wrench, after the third takedown. That gave Yazdani an 8-0 lead, and he ended the match with a great second effort on a takedown attempt.

Punia had wiggled out of a single-leg attempt, but Yazdani pursued him to the edge and gained control to make it 10-0 at 2:53 for his third technical fall in three matches.

Yazdani said he plans to compete again before Tokyo, although he did not specify what events.

"I will participate in some more competitions until the Olympics so that I can keep working on myself and my flaws," Yazdani said. "This is my preparation for the Olympics and to win the gold medal in Tokyo. That is what matters in the end."

Looking at the competition in Tokyo, Yazdani said he is not focusing on any certain opponent.

Not surprisingly, Iran added the team freestyle title to its victory in Greco-Roman earlier in the tournament at the spectator-less Baluan Sholak Palace of Culture and Sports, amassing 179 points after winning three golds and eight medals overall.

India edged Kazakhstan for second place by just two points, 151 to 149, despite having just one gold to the host nation's three. With two silvers each, the main difference came down to four bronzes won by India, against none for Kazakhstan.

In the lone final pitting Iranian and Kazakh wrestlers, Nurkozha KAIPANOV (KAZ) kept the 74kg title in Kazakh hands and earned a second career Asian gold for himself by rallying to a 6-2 victory over Mostafa HOSSEINKHANI (IRI).

"It was a hard final and that is why I am very happy," Kaipanov said. "I was ill during my training. But thanks to my coaches, I could have great preparation for the Asian Championships. Coaches do many things that we athletes do not see."

Kaipanov, the 2019 world silver medalist and Asian champion at 70kg before moving up to the Olympic weight, trailed 2-0 going into the second period, but gained a takedown and an ankle roll to go ahead. He then added a takedown to clinch the victory.

"I did not like how I wrestled today," he said. "Fortunately, I was able to win the gold medal."

Kaipanov's victory followed the gold-medal run at 74kg last year in New Delhi by compatriot Daniar KAISANOV (KAZ), who finished third at the 2019 Nursultan worlds to earn an Olympic spot.

"Kaisanov is my rival and I have never wrestled him before, but in the future we will," Kaipanov said.

Hosseinkhani had to settle for a second straight bronze medal and third in four years, as the the 2016 world bronze medalist still seeks to add to the Asian titles he won in 2014 and 2016.

Iran's other gold came at 92kg, where Kamran GHASEMPOUR (IRI) showed that while he might not be as well-known as Yazdani, he could be just as dominant by winning the gold with a third consecutive technical fall.

Ghasempour, the 2019 world U-23 and Asian champion at 86kg, stormed to a 10-0 victory in 2:09 over 2020 bronze medalist Tsogtgerel MUNKHBAATAR (MGL), whose bid to become Mongolia's first Asian gold medalist in freestyle since 2015 never got off the ground.

Ghasempour overwhelmed Munkhbaatar with four aggressive takedowns, including a driving tackle for 4 points and powerful lift-and-dump with a single leg that ended the match.

"I feel good to win the medal," Ghasempour said. "In the future, I think I will go down a weight category. The final was very good for me because it is a weight category above my original."

Ghasempour said that dropping down a division will not create a national team clash. "Yazdani goes to the Olympics and I go to world championships," he said.

Oleg BOLTIN (KAZ) capped the tournament by winning the final gold on tap for the host country with a dramatic 4-3 victory over Aiaal LAZAREV (KGZ) in the 125kg final.

With the clock ticking down and Boltin trailing 3-2, he missed a golden opportunity to score went he arm-dragged Lazarev by, but couldn't finish it off and get behind.

But with Lazarev still on his knees, Boltin pressed him down to the mat as the Kyrgyzstani reached out and grabbed a leg. From there, Boltin secured a cradle and twisted him over for 2 points with :15 left.

"The final was not easy because my opponent was good and experienced," Boltin said. "I needed to wrestle till the end to win. I wanted to make everyone happy with this medal."

As at 74kg, Boltin kept the 125kg title in Kazakhstan's possession, as it followed the victory last year in New Delhi by Yusup BATIRMURZAEV (KAZ), who clinched an Olympic spot by winning the Asian qualifier held last week in the same venue.

"The 125kg category at the Olympics is very competitive as the level of competitors is very high," Boltin said. "There are a lot of strong wrestlers.

"Yusup won [the Asian gold] last year and I won this year. He is a good wrestler."

Jahongirmirza TUROBOV (UZB) picked up the first gold of the night when he roared back from four points down to defeat Adlan ASKAROV (KAZ) 14-9 in the 61kg final.

Turobov, a 2017 Asian junior champion, erased a 6-2 deficit in the second period when he scored a takedown and a pair of 2-point tilts to take a lead that he never surrendered against Askarov, a world U-23 silver medalist and junior bronze medalist in 2019.

Even without a crowd in the stands, Turobov said he felt pressure facing a Kazakh wrestler in Almaty as he won what he called the biggest medal of his career. Now he is aiming higher.

"I want to be the world champion and go to the next Olympics and take a gold medal," he said.

In the bronze-medal matches, Mustafa AL OBAIDI (IRQ) became the first Iraqi since 1987 to win an Asian medal and the fourth overall when he notched a stunning and creative victory by fall at 86kg over Hayato ISHIGURO (JPN).

Ishiguro, a 2018 world junior champion, opened the scoring with a stepout, and seemed to be in no danger when he stopped a tackle attempt by Al Obaidi. But the Iraqi locked onto Ishiguro's arms, twisted him over and, with his back to the Japanese's chest, pressed him down for a fall in 1:06.

Just as odd was what happened moments later as Al Obaidi celebrated his historic victory. After raising a fist, he suddenly went from ecstasy to agony and dropped to the mat, clutching his left hamstring in pain. He had to be carried off the mat, but was able to walk on his own for the medal ceremony.

Navruzov, the Asian champion at 70kg in 2018, had lost a close 5-2 decision to Hosseinkhani in his opening match. He said he is aiming at getting back to the Olympics, after compatriot Bekzod ABDURAKHMONOV (UZB) secured a Tokyo spot for Uzbekistan at last week's Asian Olympic qualifier.

"I have been off the mat for some time because of COVID," Navruzov said. "But I have been training now and will wrestle at 74kg. I will also have a trial with Bekzod to decide who goes to the Olympics."

Sanjeet KUNDU (IND), who placed third at the 2019 world U-23 in Greco-Roman, earned his first senior freestyle medal by holding on for an 11-8 win over Rustam SHODIEV (UZB) at 92kg. Kundu had led 11-2 with just over two minutes left.

A silver medalist last year, Khuderbulga DORJKHAND (MGL) had to settle for bronze this time after rolling to a 10-0 technical fall over Amirjon NUTFULLAEV (UZB) at 125kg. It is the sixth career Asian medal for Dorjkhand, who won his lone title in 2014.

Korea won two bronze medals through Gwanuk KIM (KOR) at 86kg and Hyeokbeom GWON (KOR) at 92kg. The other bronzes were won by: Shoya SHIMAE (JPN) and Ikromzhon KHADZHIMURODOV (KGZ) at 61kg, Sumiyabazar ZANDANBUD (MGL) at 74kg, and Amin TAHERI (IRI) at 125kg.