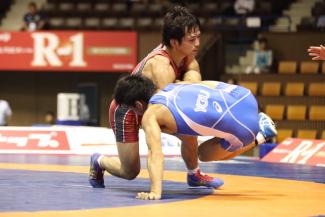 TOKYO (June 16) - A month after a confidence-boosting gold-medal performance at the Asian Championships in New Delhi, Yuki TAKAHASHI ensured he would heading overseas again this summer, when the stakes will be higher.

Takahashi defeated training partner Kazuya KOYANAGI 7-o in the final on the first day of the three-day tournament, which is known as the Meiji Cup and is serving as the final qualifying meet for Paris 2017.

“Frankly speaking, I’m relieved,” said Takahashi, who in New Delhi became Japan’s first Asian gold medalist in freestyle since 2010. “Winning the title at the Asian Championships should have given me momentum. But I didn’t have good practices. When I sparred with Koyanagi, who I met in the final, he scored on me. I didn’t feel in top form, so it’s good that I could still win.”

Under criteria set by the Japan Wrestling Federation, the men’s winners at the National Championships (Emperor’s Cup) in December clinch a berth on the squad to Paris by also prevailing at the invitational meet. In cases when a different champion is crowned, a playoff is held immediately following the day’s action between the winners of the two tourneys.

Of the six men’s weight classes in action on Friday (three each in freestyle and Greco-Roman), five were won by the Emperor’s Cup champions to decide outright the places to Paris.

The lone playoff of the day came in the freestyle 125kg class, in which December winner Taiki YAMAMOTO avenged a 2-1 loss earlier in the semifinals to Tetsuya TANAKA by beating him 4-1 in the wrestle-off.

The women’s team to Paris will be decided at a later date in a meeting of federation officials, based on results from the two championships and other factors. 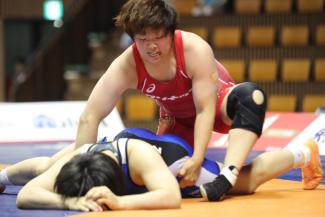 The two women’s winners on Friday will almost surely be on the plane to Paris. Hiroe SUZUKI cruised to her sixth straight title at 75kg, while Asian 2017 bronze medalist Katsuki SAKAGAMI added the 58kg gold to the one she won at 60kg in 2014.

Takahashi showed he has the ability to finally win a world medal after coming home empty-handed twice previously with a dominating performance in one of Japan’s traditionally stronger weight divisions.

He did not concede a point in three matches, including the final, which featured a clash of former and current Yamanashi Gakuin University wrestlers. The 23-year-old Takahashi, who graduated last year and now competes for top corporate club team ALSOK, won his third title overall and first in two years.

Takahashi’s opening match, a 6-0 win over Yosuke KAWANO, was particularly satisfying, as it avenged a loss at the 2015 National Championships that ended Takahashi’s chances of making the team to the Rio 2016 Olympics.

“That was in my mind,” Takahashi said. “I was scared, but people around me encouraged me and supported me. I thought about getting revenge by beating him.”

Takahashi said his bid for an elusive world medal has been made more urgent amid talk that the 57kg division faces elimination. He feels he will be at a disadvantage if the minimum weight class is made heavier.

“This might be the last time for this weight class, so I definitely want to finish in the top three,” he said. 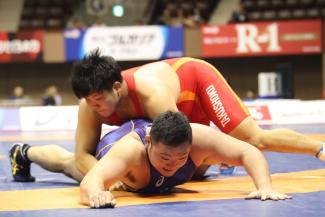 At 125kg, Yamamoto came into the tournament having won a bronze medal at the Asian Championships, but his ticket to Paris was never assured until his hand was raised after the playoff.

In the semifinals, Tanaka scored with a stepout in the final minute to secure the 2-1 victory, then earned his place in the playoff by beating five-time former champion Nobuyoshi ARAKIDA 2-0 in the final for his first title. Both of Tanaka’s points were scored while Arakida was on the activity clock.

In the playoff, Yamamoto scored four early points when he pursued Tanaka at the edge before taking him down and executing a roll. In the flurry, Tanaka appeared to expose Yamamoto’s back, but the two points awarded were rescinded upon replay review. Yamamoto then held on for the victory.

“After I lost (in the semifinal), I heard from a number of people, ’If you don’t attack, you can’t win,’” Yamamoto said. “In the playoff, I thought to be aggressive. I scored first, but I was defensive (after that) and that was not good.”

In the other freestyle final, at 86kg, Masao MATSUSAKA defeated Shota SHIRAI 3-1 for his first title, scoring the decisive takedown with just over a minute left then fighting off a single-leg attempt at the end.

There were repeat champions in all three Greco-Roman categories, led by Yuya MAETA, who made it three straight at 80kg with a 4-1 victory over Nobuaki TESHIGAWARA.

Shogo TAKAHASHI (66kg) and Yuta NARA (98kg) won their second straight golds. Takahashi rode a four-point throw in the first period to a 4-1 win over Katsuyoshi KAWASE, while Nara scored a 2-1 victory over Suguru KINOSHITA in a dull bout in which all points were scored for opponent’s passivity.

Nara was more impressive in advancing to the final by beating last year’s 86kg champion Masayuki AMANO by technical fall in 1:11, twice using headlocks for four-point moves in a 9-0 victory.

Suzuki, who will turn 30 in August, had considered retiring after winning the Emperor’s Cup title in December, saying she had lost her motivation. She skipped the Asian meet, a tournament she won in 2015.

But she said she had a change of heart, and was able to all but earn her fourth trip to the World Championships with a victory by fall at 2:29 of the final over Asian 2017 silver medalist Masako FURUICHI.

Suzuki said encouragement from colleagues in her company and talks with her parents helped her get back on track. Like Takahashi, she will aim for a first medal at the World Championships, where her best finish was seventh in 2015.

“I’m excited to think I will be able to compete against powerful wrestlers from other countries,” she said.

Sakagami won all three of her matches by 10-0 technical falls, although the clinching takedown in the final against teenager Yuzuru KUMANO came with just two seconds left. It was all elementary as Sakagami had scored eight points in the first period.

In the semifinals, Sakagami needed just 50 seconds to finish off Mikako HIGUCHI, avenging a loss by younger sister Fubuki to Higuchi in the first round.

Sakagami, dropping down from 60kg, fills the hole left by defending champion Chiho HAMADA’s drop to 55kg and Emperor’s Cup and Rio 2016 gold medalist Risako KAWAI’s move up to 60kg.