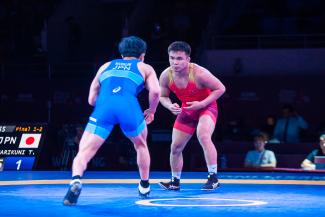 A 10-member All-World team will descend upon Coralville for the freestyle World Cup on December 10 and 11 at the Xtreme Arena and if all works out, will be a serious threat for the title.

The 2022 World Cup is the first time that an All-World team is going to participate in the tournament. It comprises the top finishers in each weight class from Belgrade who are not part of the five teams which qualified directly.

The USA, Iran, Japan, Mongolia, and Georgia were the top five teams at the World Championships and gained automatic qualification for the World Cup. But the All-World looks a formidable unit.

The All-World team is placed in Group B with Iran and Japan and is likely that it will finish at the top of the standing and wrestle in the final.

Opening its campaign against Japan, the All-World team will be a heavy favorite. Japan is missing both its world champion, Rei HIGUCHI (JPN) and Taishi NARIKUNI (JPN), from the line-up and has sent a relatively young team.

But the All-World team will bank on Abakarov, Muszukajev, Akmataliev, Salkazanov and Nurmagomedov to give the team an outright win.

Japan is also unlikely to win against Iran making the All-World vs Iran match late on Saturday a virtual semifinal.

"Our preparation is very good," Akmataliev said. "We were supposed to hold a camp in America but it did not go through. So, we are preparing in Bishkek. Saturday will show on the mat."

Akmataliev is one of the most exciting wrestlers around the world with clutch performances, especially in come-from-behind wins. He will be expected to win all his bouts in Coralville. And he hopes the team will also be able to do the same.

"I was very happy when I received the invite for the world team," he said. "Our team is very strong, and we will show our potential. We can beat all the other teams.

"Our wrestlers are best in their weight classes and if we can come together as a team, we will be champions," he added.

Akmataliev hopes to wrestle the USA in the final but is aware of the threats Iran and Japan pose in the group stage.

"I cannot say that one team is weak or strong," he said. "Every opponent is strong, and I will treat every bout as the final and try to win"

If the USA and All-World team do meet in the final, expect a neck-to-neck battle with both teams equally good enough to win.

If Abakarov can give a winning start to the All-World team, it will be Vangelov up against Seth GROSS (US) at 61kg and a fan-favorite bout between Muszukajev and John DIAKOMIHALIS (USA) at 65kg. Akmataliev holds the upper hand against Tyler BERGER (USA) with Salkazanov and Jason NOLF (USA) at 74kg.

Salkazanov needs to win even if Budazhapov loses to Jordan BURROUGHS (USA) at 79kg. Dauletbekov up against Zahid VALENCIA (USA) at 86kg will be a crucial match-up for both teams as Numagomedov is expected to win against Nathan JACKSON (USA). Kyle SNYDER (USA) has the upper hand at 97kg against Tsakulov in the World Championships final rematch. The All-World team will need Khotsianivskyi to win at 125kg against Hayden ZILLMER (USA).

In all likelihood, it will end with five wins for both teams and the team with more classification points winning the World Cup.