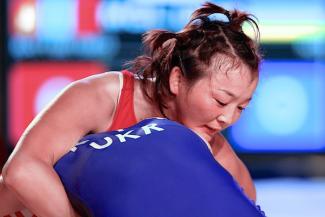 Mongolia's Altantsetseg BATTSETSEG looks for a go-behind during her 10-0 finals victory over Ukraine's Tetyana KIT Friday night in Zagreb. The Mongolian 55kg wrestler became her country's thrid champion in as many years. (Photo: T.R. Foley, FILA-Wrestling.com)

ZAGREB (August 8) – Former European champion Sabira ALIEVA (AZE) brought the curtain down on Female Wrestling at the Junior Wrestling World Championships with Azerbaijan’s second-ever gold medal in the women’s events and first since 2010.

Russia had two champions, a silver and a bronze medalist for 45 points and second place, while Azerbaijan was third with 33 points, one gold medalist and two bronze medal winners.

The fourth gold medal of the evening went to Lyubov OVCHAROVA (RUS) who trapped last year’s senior world bronze medalist Ekaterina LARIONOVA (KAZ) on her back after a failed throw and held of the fall.

Wrestling continues Saturday with action in Freestyle categories 50, 60, 74, and 96kg.  Preliminary rounds and repechage will be wrestled from 10:00.  Medal finals and awards ceremonies will begin at 18:00.

Returning champion Yu MIYAHARA (JPN) scored off a low single before the break and added a single-to-double combination in the second period to sew up a 4-0 over Asian junior runner-up XIE Ya (CHN).

In the bronze medal bouts, Milana DADASEHVA (RUS) came out of a late scramble with two-point exposure against European junior runner-up Evin DEMIRHAN (TUR) and then held on for a 9-7 win.

Mamta MAMTA (IND) locked for arm-and-leg control and dropped 2011 cadet world silver medalist NAMUUNTSETSEG Tsogt-Ochir (MGL) to her back twice on her way to a 11-1 technical at 3:37.

ALTANTSETSEG Battsetseg (MGL) scored on a series of go-behinds and stymied Tatyana KIT (UKR) with her quickness and strength while forging a 10-0 technical fall at 5:19.

Former cadet world champion Nanami IRIE (JPN) scored with a knee pick takedown against WANG Xuejing (CHN) and covered for the fall at 2:43 for the bronze medal.

Solmaz HASHIMADA (AZE) built up an early five-point lead, but needed a late double-leg takedown to hold onto a 9-6 win over Amber MASCHKE (CAN) for the other bronze.

European junior bronze medalist Lyubov OVCHAROVA (RUS) opened with a bear hug and when two-time Asia junior champion Ekaterina LARIONOVA (KAZ) attempted an arm trap and back-arching throw, Ovacharova step to the side for the block and pressed for the fall only 46 seconds into the championship bout.

Asian junior runner-up BURNEEBAATAR Nyamgerel (MGL) landed on top of a missed lateral drop by Elmira GAMBAROVA (AZE) and pressed the European junior silver medalist for the fall at 5:57 and the bronze medal.

Kiwa SAKAE (JPN) scored a pair of go-behind takedowns against Pan American junior champion Temitope OGUNJIMI (CAN, pj1) and nearly had the fall at the end of regulation time, but still earned the bronze with a 9-0 decision.

Sabira ALIEVA (AZE) scored a four-point drop early and held a 9-0 only one minute into the final, but reigning European champ Anzhela KATAEVA (RUS) continued to battle, eventually in a losing cause, 13-5, to the 2013 European champion.

Victoria FRANCIS (USA) worked half a dozen forward breaks and go-behinds while fashioning a 16-6 technical fall at 6:00 over Francy RADELT (GER). Radelt had a big tackle going out of bounds for a brief 5-4 lead.