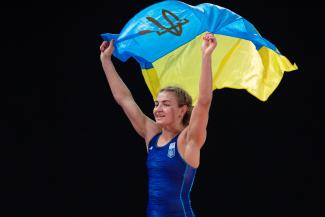 BELGRADE, Serbia (November 5) – Alina AKOBIIA (UKR) has made four trips to the U23 World Championships but never returned with a gold medal.

She won a bronze in 2017, failed to medal in 2018 and reached the final in 2019 but Sae NANJO (JPN) proved too strong as Akobiia finished with a silver medal.

But the wait for gold finally ended Friday as the U23 European champion won the 57kg weight class at the U23 Worlds in Belgrade, Serbia. Not only it was a personal achievement but her gold added to Ukraine's stunning campaign which saw them win the team title for the first time at any World Championships.

“I finally won the gold medal,” Akobiia said. “It’s the first world title in my sporting career. I am very happy and thankful.”

Born in a small village in Poltava, Ukraine, Akobiia made evident the gulf of class between her and others in Belgrade, reaching the final after pinning every opponent.

A day later, the script had a slight change as she failed to pin Kristina MIKHNEVA (RUS) but the end result was the same. Akobiia was held scoreless in the first period, but a pair of takedowns with less than 40 seconds left in the bout pushed her past the Russian for a 5-1 win.

Heading into the final session, Ukraine sat in third place and trailed Russia by 14 points. Akobiia’s gold-medal win helped Ukraine leap the United States for second place and by the time the last final -- 72kg -- ended, they stole the title from Russia, 161 points to 140. The USA finished third with 102 points, two more than India. Turkey took fifth place in the race.

Anastasiia LAVRENCHUK (UKR) and Anastasiya ALPYEYEVA (UKR) won the two other gold medals for Ukraine at 65kg and 72kg respectively while Ana GODINEZ GONZALEZ (CAN) stopped them from winning a fourth as she denied Kateryna ZELENYKH (UKR) with a 10-7 win in the 62kg final, giving Canada its first gold medal of the tournament. 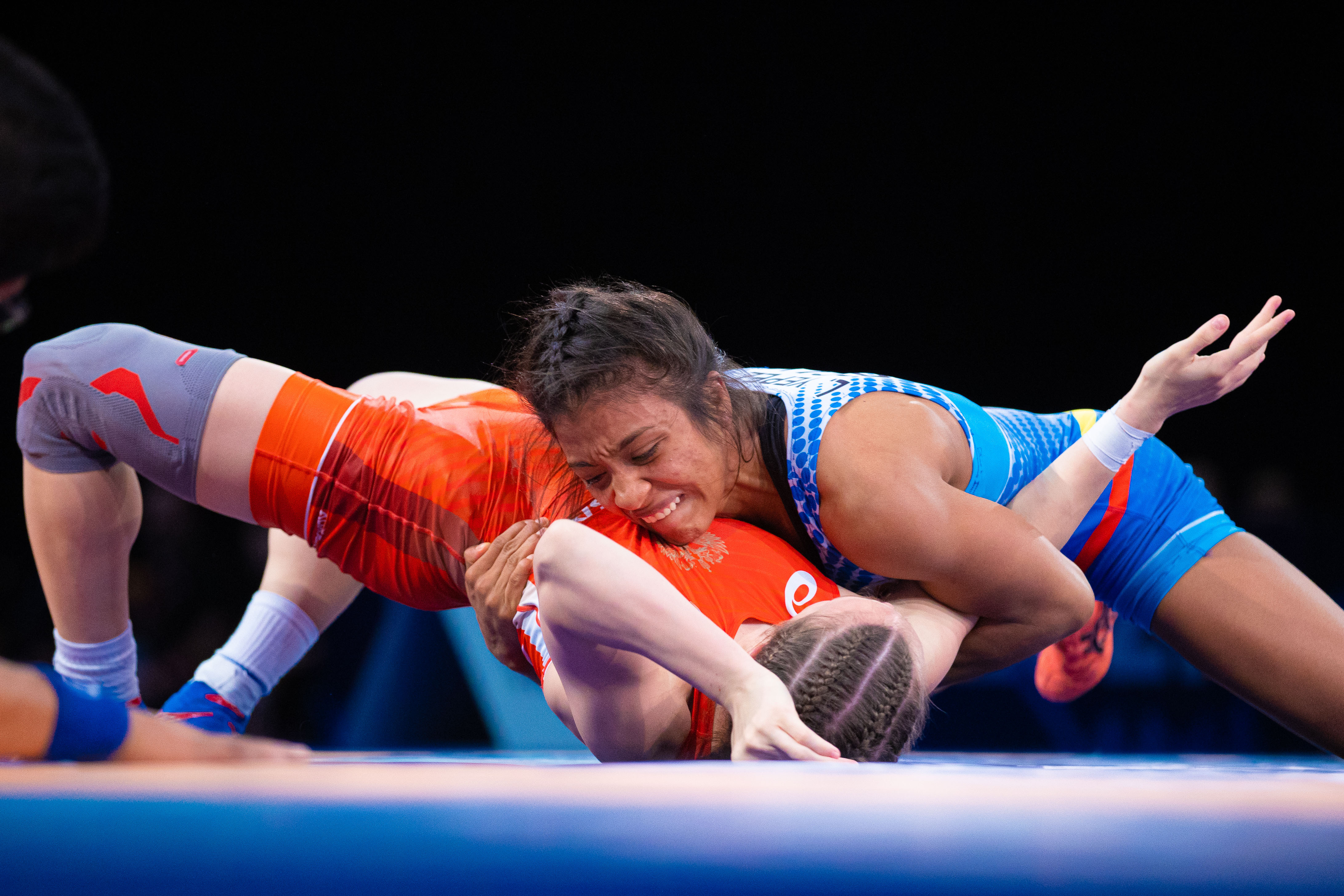 The Tokyo Olympian faced U23 European champion Ekaterina VERBINA (RUS) in the final but unfazed by her opponent, she only used 70 seconds of the six minutes in the finals to pick up the fall. She became the fourth women’s wrestler of the #WrestleBelgrade competition to win their country's first-ever U23 world title.

A teary-eyed Yepez Guzman was filled with emotions as she talked to her family over the phone after the gold medal bout.

“It's a historic medal for Ecuador,” Yepez Guzman said. “I have been training for this for 10 years and I had studied the Russian wrestler. I am happy to win this.” 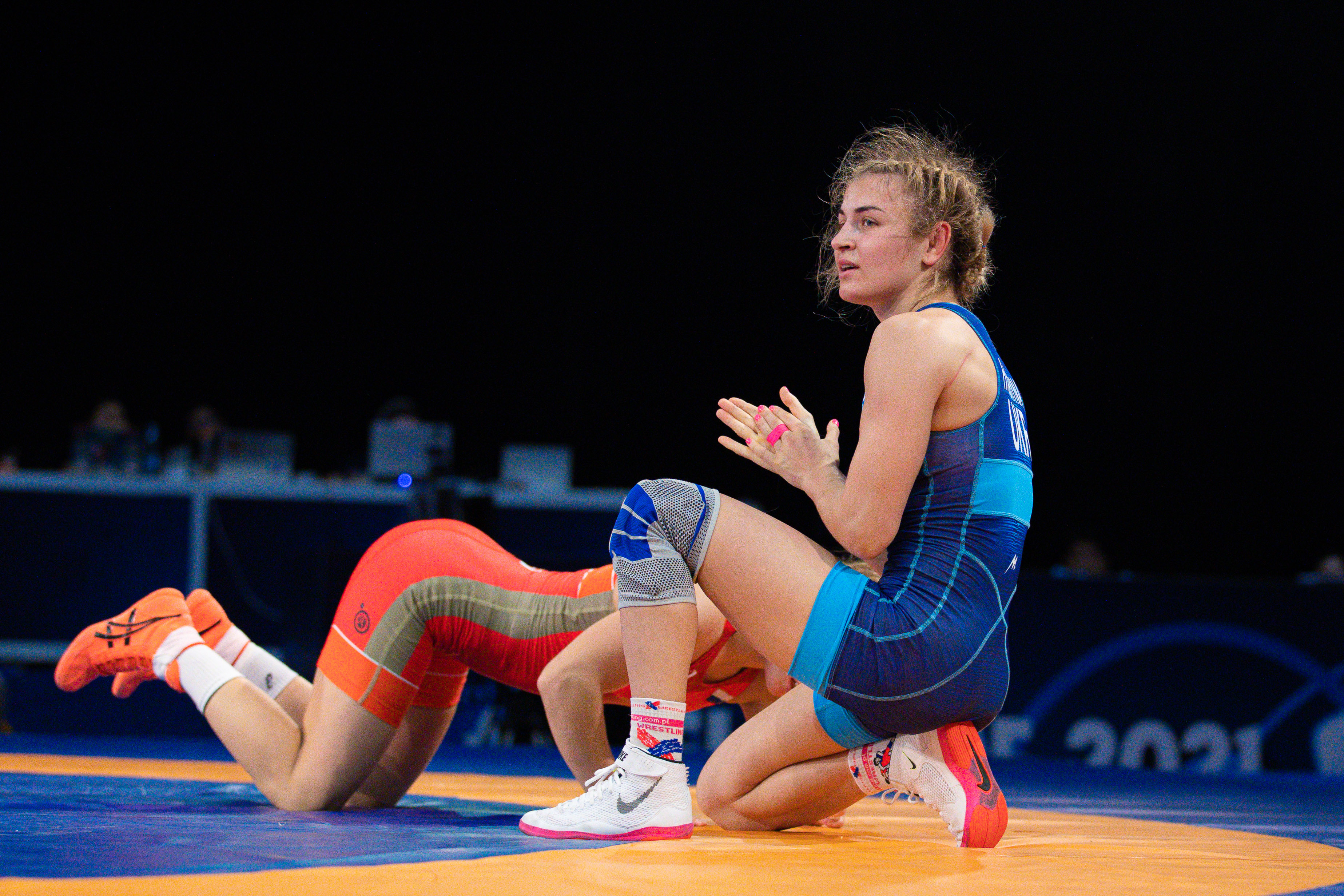 Akobiia's medal got Ukraine going for the night as the team title hung in balance between Russia and Ukraine in the absence of women's wrestling powerhouses Japan and China.

The former junior world silver has had an exceptional year winning a bronze medal at the European Championships, qualifying Ukraine for the Tokyo Olympics and winning the U23 gold at the continental level.

“The Euros gold was also very important to me,” she said. “It’s a great feeling when you run around with the Ukrainian flag. I’ve been a European champion four times, but I have never been the world champion before, that’s why I am so happy.”

But two weeks before the Olympics she injured her elbow, forcing her to miss the Games but the gold Friday eased some of the pain she felt in August.

“The injury didn’t let me compete at the Olympics,” she said. “At the beginning when I was just injured, I didn’t realize what happened, I was shocked. Now when the Olympics have finished, I realized that I lost my opportunity. But I didn’t give up, a few months later, I came here and became a world champion.”

The 22-year-old is now ready to win a medal at the senior World Championships and is already focused on the 2024 Olympics.

“I haven’t competed at the senior worlds yet, but I hope I will win a medal as soon as I go there,” she said. “It’s the new Olympic cycle, it’s time to get ready.” 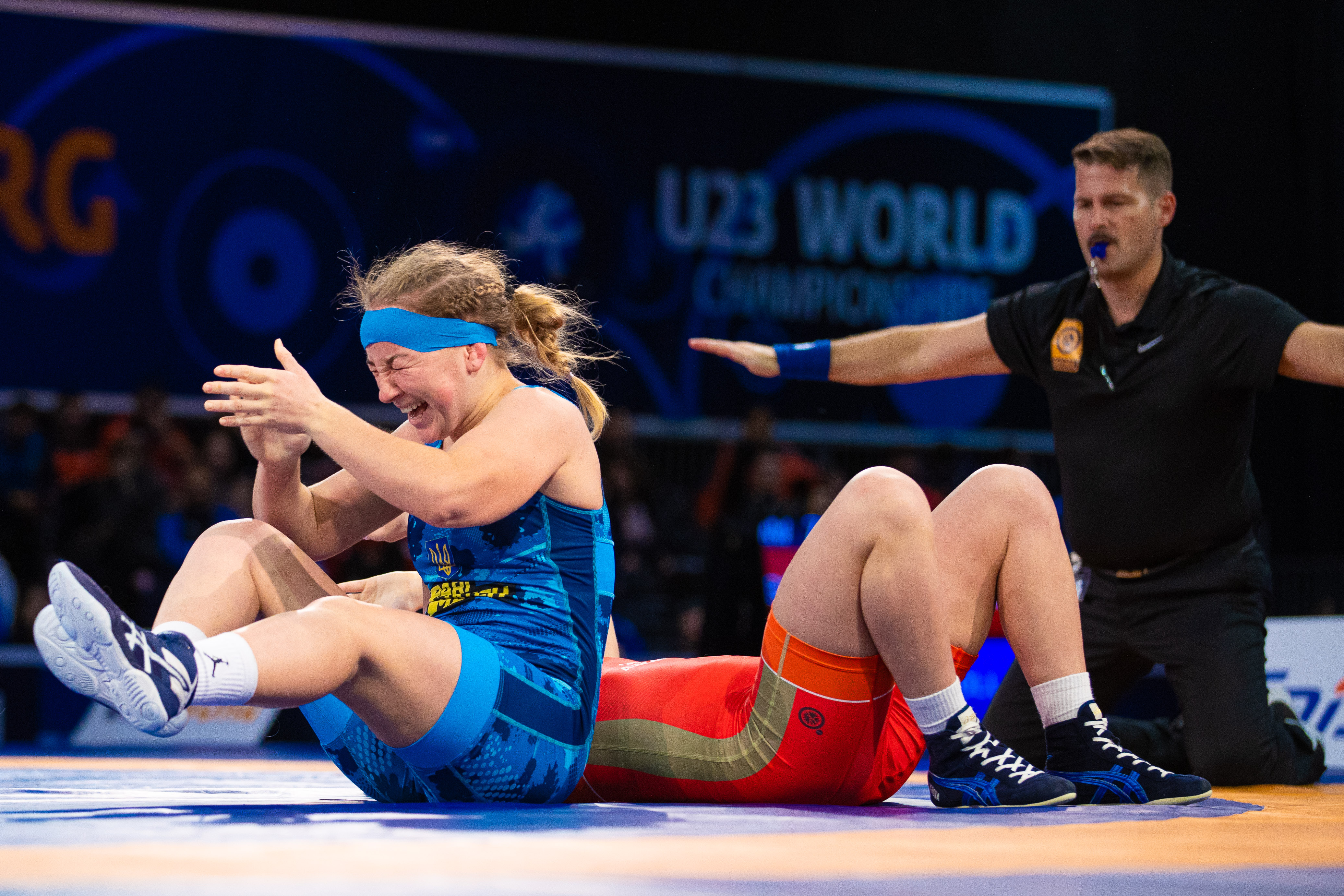 At 65kg, Lavrenchuk secured a fall over Dinara KUDAEVA SALIKHOVA (RUS) and jumped around to celebrate her world title. She only needed 88 seconds for the pin.

“I’ve been trying to win the gold for so long,” Lavrenchuk said. “I had many injuries but I was ready to do anything to win.”

Lavrenchuk was in Oslo as well but at 68kg and lost 0-8 against Tamyra MENSAH STOCK (USA) after winning her opening round via fall. That experience helped her prepare for Belgrade.

“After the senior worlds in Oslo, I believed in myself to make it. The competition is tough in my category in Ukraine,” she said.

Talking about the team title win, she said that Ukraine deserves it because they have been training hard even during COVID-19.

“Even in the two years of coronavirus we kept training,” she said. “Our coaches are the best as they organize the training camps, prepare the schedule of the competitions.” 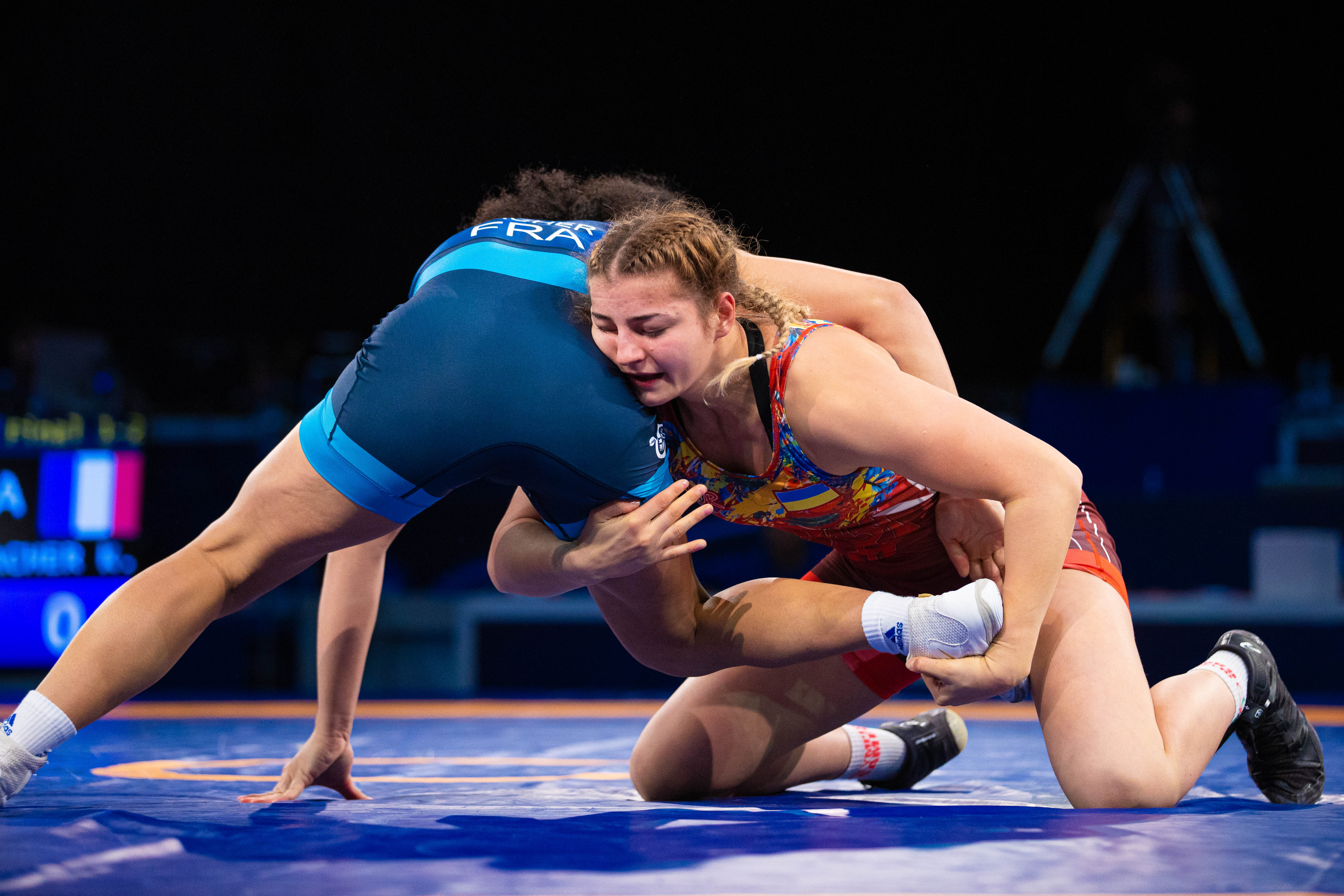 Part of that team and another gold medalist was Alpyeyeva who overcame a tough challenge in Kendra DACHER (FRA) in the 72kg final. She trailed 0-1 going into the second period but scored a takedown to lead 2-1.

She held Dacher in danger position which the mat chairman called neutral but Ukraine challenged it and won, giving her two more points. Dacher, who was looking to win a second world gold for France, failed to add any more points.

“I can’t believe I won it,” she said adding that it was even more important to prove that their team is the best in the world.

“Our team is very friendly and our coaches raise the team spirit in us,” she said. “We proved long ago that our team is the best at the European level and it was important to prove the same thing on the world level. 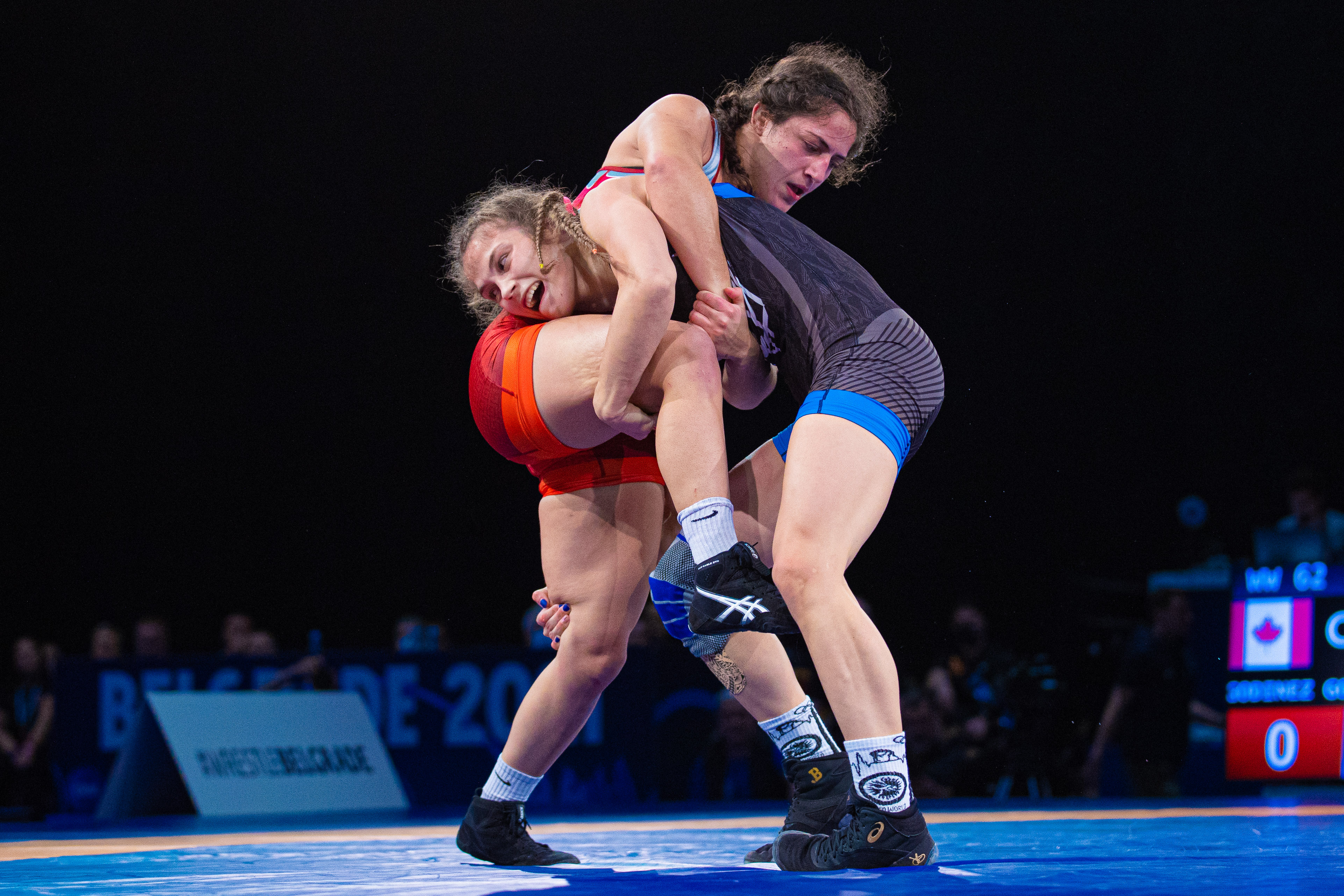 Ukraine could have won another gold but Godinez Gonzalez had other ideas. As the 62kg final began, Zelenykh caught Godinez Gonzalez on her heels with a double leg and put the first two points on the board. She added a step out from a single-leg attempt and led 3-0. The Ukrainian tacked on a second takedown and extended her lead to 5-0 after the opening three minutes.

Zenykh scored the third takedown after her Canadian opponent snapped her right into a double leg. But the match quickly turned in favor of the Canadian.

Zenykh dove in on a shot and surrendered a spin behind, cutting her lead to, 7-2. The Canadian scored four additional takedowns in the second period to steal the U23 world title.

“I feel like crying,” Godinez said. “I have been working very hard and to come back after losing a month ago at the senior Worlds in Oslo [lost to Ilona PROKOPEVNIUK (UKR) in the quarterfinals].”

But Godinez has spent the last one year traveling around Europe to get more experience as she aims to be successful at the senior level.

“The European style is different from North America,” she said. “I am trying to get more and more international experience and come to camps in Europe and I want to win senior worlds.”

The camps in Tallin, Estonia and Spala, Poland helped improve her wrestling. With an added advantage of superior conditioning, the Langely, British Colombia wrestler found it easier to wrestle six minutes than her opponent.

“After a couple of minutes I noticed that she was slowing down,” she said. “I worked really hard on my conditioning and I could see on her face that she was broken. I wrestled well and followed my game plan. It did not go accordingly in the final but a win is a win.” 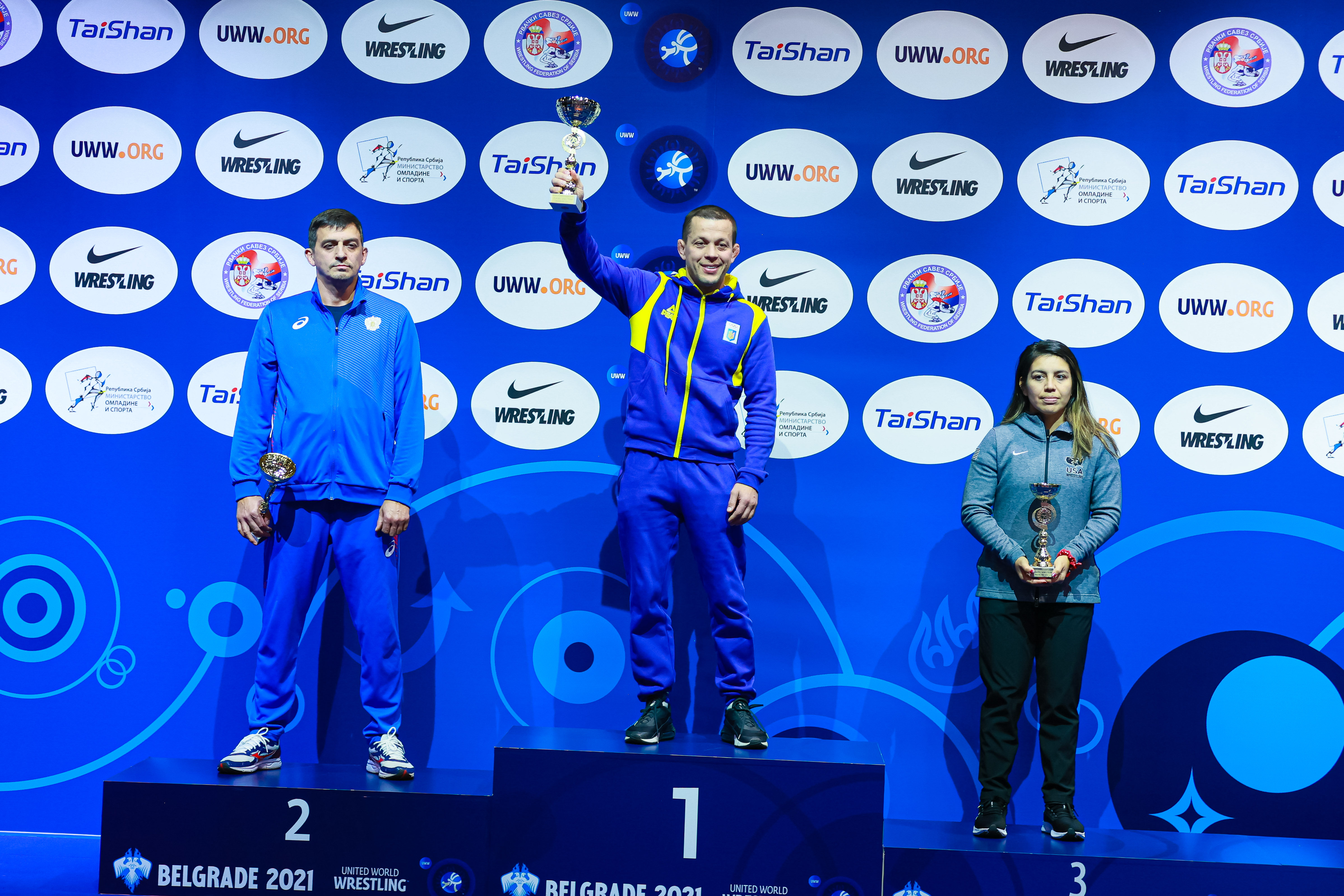 Ukraine won the women's team title at the U23 World Championships in Belgrade. (Photo: UWW / Belgrade)