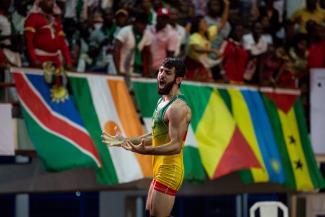 Combrinck, 23, recently represented South Africa at the 2018 Commonwealth Games where he took fifth-place. Ranked as high as 12th in the world, Combrinck’s next competition was expected to be the 2018 U23 World Championships in Bucharest, Romania.

Michael GAITSKILL, who also competed on South Africa’s 2018 Commonwealth Games team was in the car with Combrinck and in is the intensive care unit in critical condition.

In a statement released by SASCOC, South Africa’s umbrella sports body, President Gideon Sam said, “The loss of Kleinjan and the serious injury to Michael rocks the very heart of the SA sporting family. Both these two fine men were excellent wrestlers and also brilliant ambassadors for South African sport on the international front.”