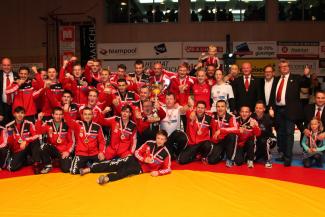 One of the most successful year in the history of Austrian Wrestling Federation has come to an end.

Sealed by AC Wals winning their 49th title in Greco-Roman wrestling, Austria's year on the mat included Amer HRUSTANOVIC's Eurpoena bronze medal, the showcasing of a dozen wrestlers for the 2015 European Games and a year of sensational success from the young athletes across the country.

"This was the best showcase possible for the sport of wrestling," said Mag. Thomas Reichenauer President of the Austrian Wrestling Federation at the conclusion of the National Wrestling League finals last week at the Winzerarena in Klaus. "These were exciting, competitive bouts."

Team KSK Klaus, who are 11-time Austrian Champion, brought a few hundred fans to Wals-Siezenheim, where the Walserfeldhalle was sold out with more than 1500 spectators in attendance along with four television 4 stations (ORF-Sport, RTS Salzburg, Untersberg-TV, Sporttime-TV) and numerous journalists from Austria and Germany.

The final fight offered everything one can expect from wrestling with AC Wals and its Sports Director Max Ausserleitner the lucky winners, edging team KSK Klaus in the finals, 30-25.