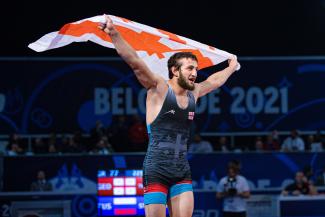 BELGRADE, Serbia (November 2) -- In the last 24 days, Leri ABULADZE (GEO) captured a silver medal at the Senior World Championships and a gold at the U23 Worlds.

Recovering from a heartbreaking 5-4 loss in the Oslo finals to Meysam DALKHANI (IRI), Abuladze dug deep for the 3-1 win over Ahmet OYUR (TUR) in the 63kg final in Belgrade and won his first-ever world title.

Abuladze was one of the five wrestlers that won gold on Tuesday at the Belexpocentar in the Serbian capital. Russia won two gold while Iran and Hungary each won one.

Abuladze's wrestling was the highlight of the tournament over the two days. He scored from disadvantageous positions and defended as if his life depended on it to rally to the title. And though he holds the silver in Oslo higher, he said he was proud of his effort in Belgrade.

"It's not possible to describe the feeling I had when the Georgian anthem was playing," Abuladze said.

In the final, the Georgian controlled Uyar for the first period, and after following up an inactivity point with a left-sided gut wrench, carried a three-point lead into the second period.

But in the second period, Abuladze had to dig deep after giving up an inactivity point himself. He furiously fought off a Turkish lift attempt and won his first world title with a 3-1 victory.

Despite a testing final, he picks the semifinal against Tokyo Olympian Alireza NEJATI (IRI) as his toughest bout of the tournament.

"The one with the Iran wrestler [was the toughest bout]," he said. "That is because he is a senior world medalist [2019], he was in Tokyo Olympics.

"He is a good wrestler and a tough opponent, but the stronger one won." 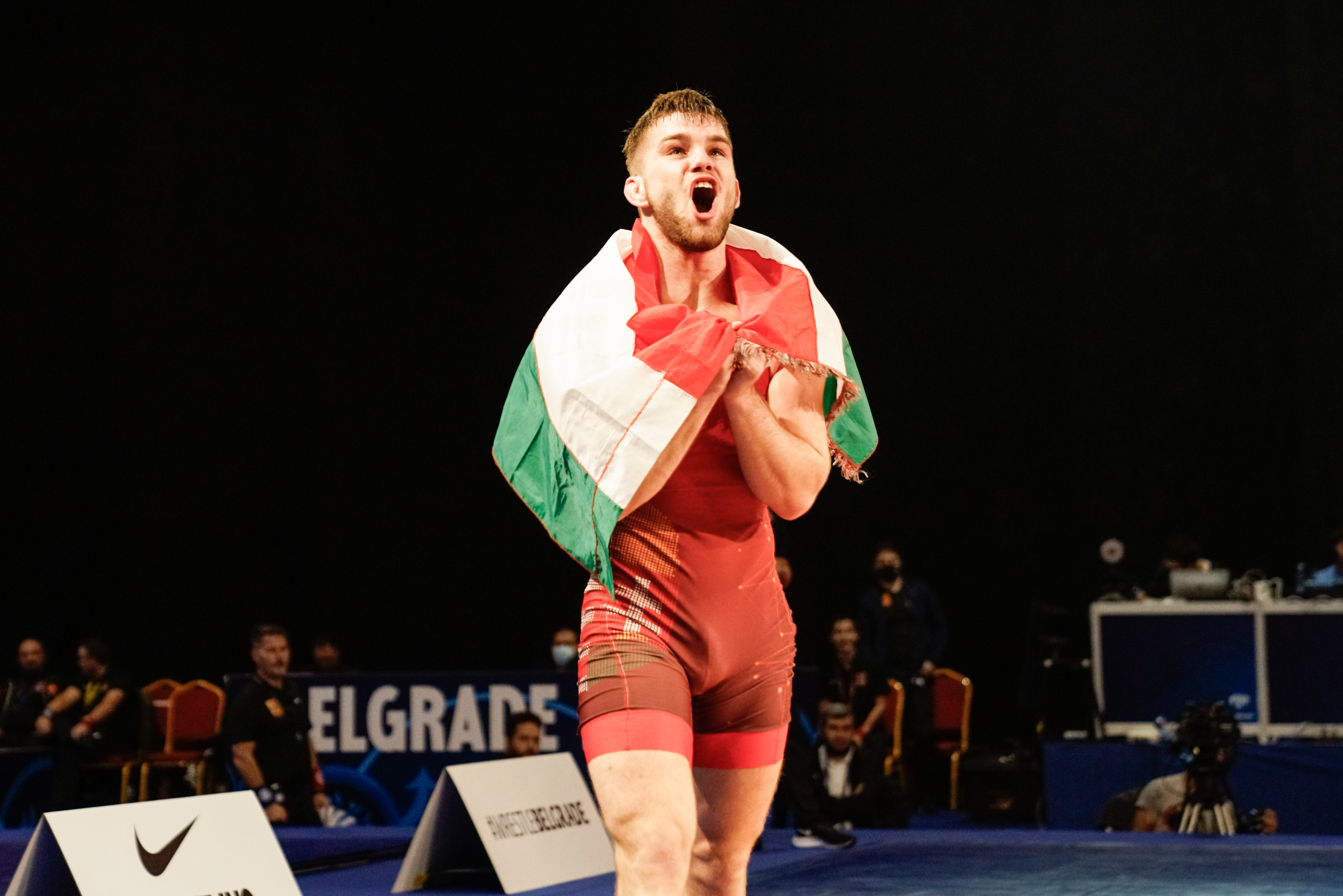 At 77kg, Tamas LEVAI (HUN) joined Erik SZILVASSY as Hungary's only U23 GR world titleholder with a tactical 5-1 performance over Amin KAVIYANINEJAD (IRI). The Hungarian lit up the scoreboard with all five of his points in the first period of the 77kg finals. The refs awarded Levai the one point for inactivity before throwing Kaviyaninejad's feet over his head with a four-point lift.

The inactivity was returned in the second period, but Levai escaped while only giving up the one point. Nevertheless, he hung on and stopped the Iranian from adding a fourth world title to his resume.

"I wanted this so bad," Levai said. "My family is of wrestlers, but we did not have a medal at the World Championships. But I have broken the ice."

Levai has been a constant performer at the continental level but made a name for himself when he defeated two-time Olympic champion Roman VLASOV (RUS) at the Poland Open. But Vlasov avenged that loss in Oslo.

With Vlasov watching from the stands, Levai was motivated to impress the Greco-Roman legend from Russia.

"Before coming here, I imagined myself as a world champion," he said. "I was very focused and thinking that if I can beat Vlasov, then I can beat anyone. So I was motivated and wanted to show him that I am a really good wrestler." 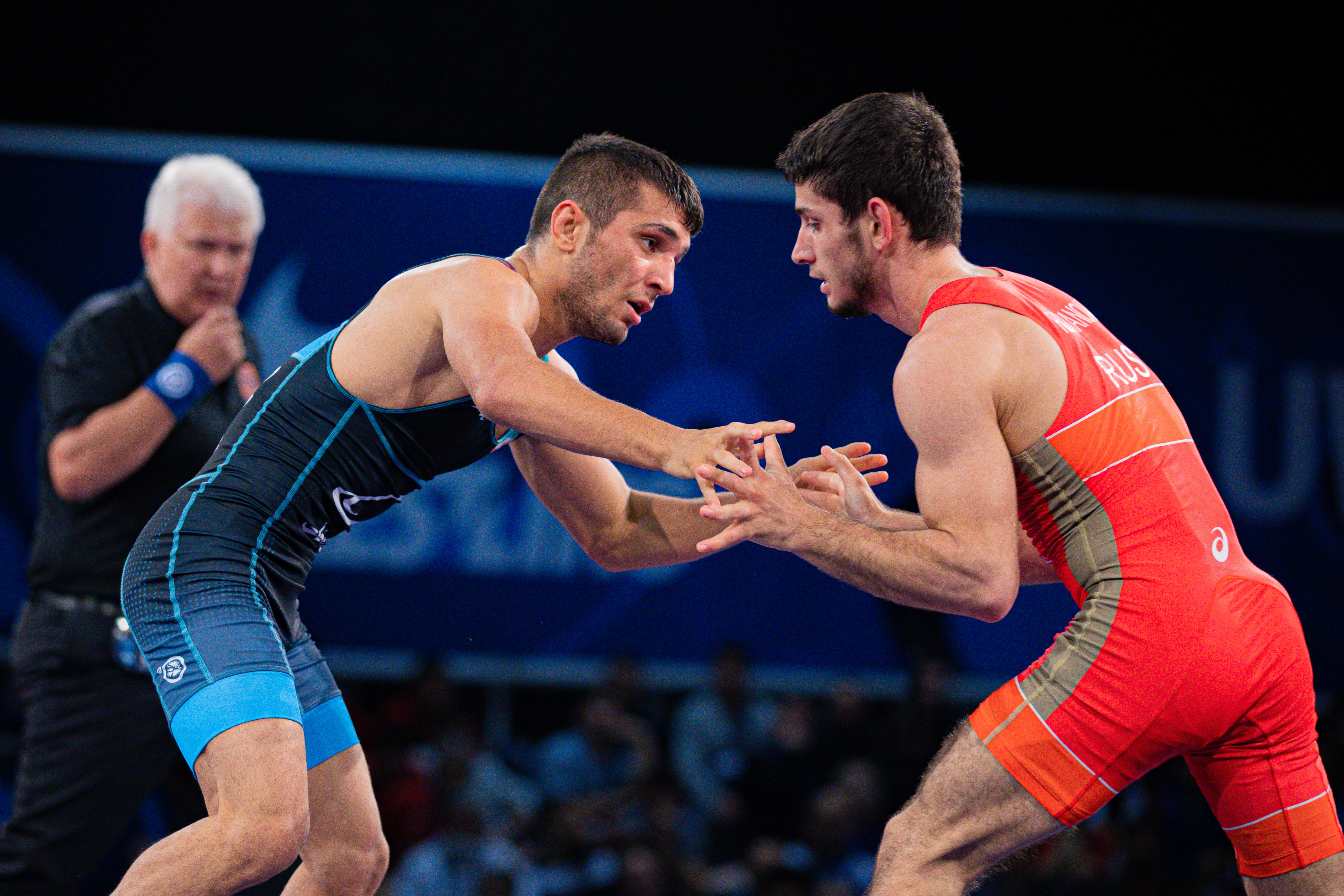 Russia had two finalists Tuesday and both came away with gold. Mavlud RIZMANOV (RUS) was up first. He stopped Iran's Poya DAD MARZ from winning a second age-group world title with a two-point come-from-behind win at 55kg.

The '21 U23 European bronze medalist surrendered an inactivity point and trailed 1-0 heading into the final frame. However, with less than two minutes to go in the bout, the Russian failed to capitalize on a lift attempt but seamlessly transitioned into a right-sided gut wrench and gained a 3-1 lead.

Rizmanov, who was introduced to the sport by his brothers and as he got better, got admitted to the Rostov Olympic College, fought off a late flurry of attacks from Dad Marz and picked up Russia's first 25-point gold medal win over of the night.

"I knew it wasn't going to be easy as Iranians are always tough to wrestle," Rizmanov said. "I was prepared for a six-minute bout." 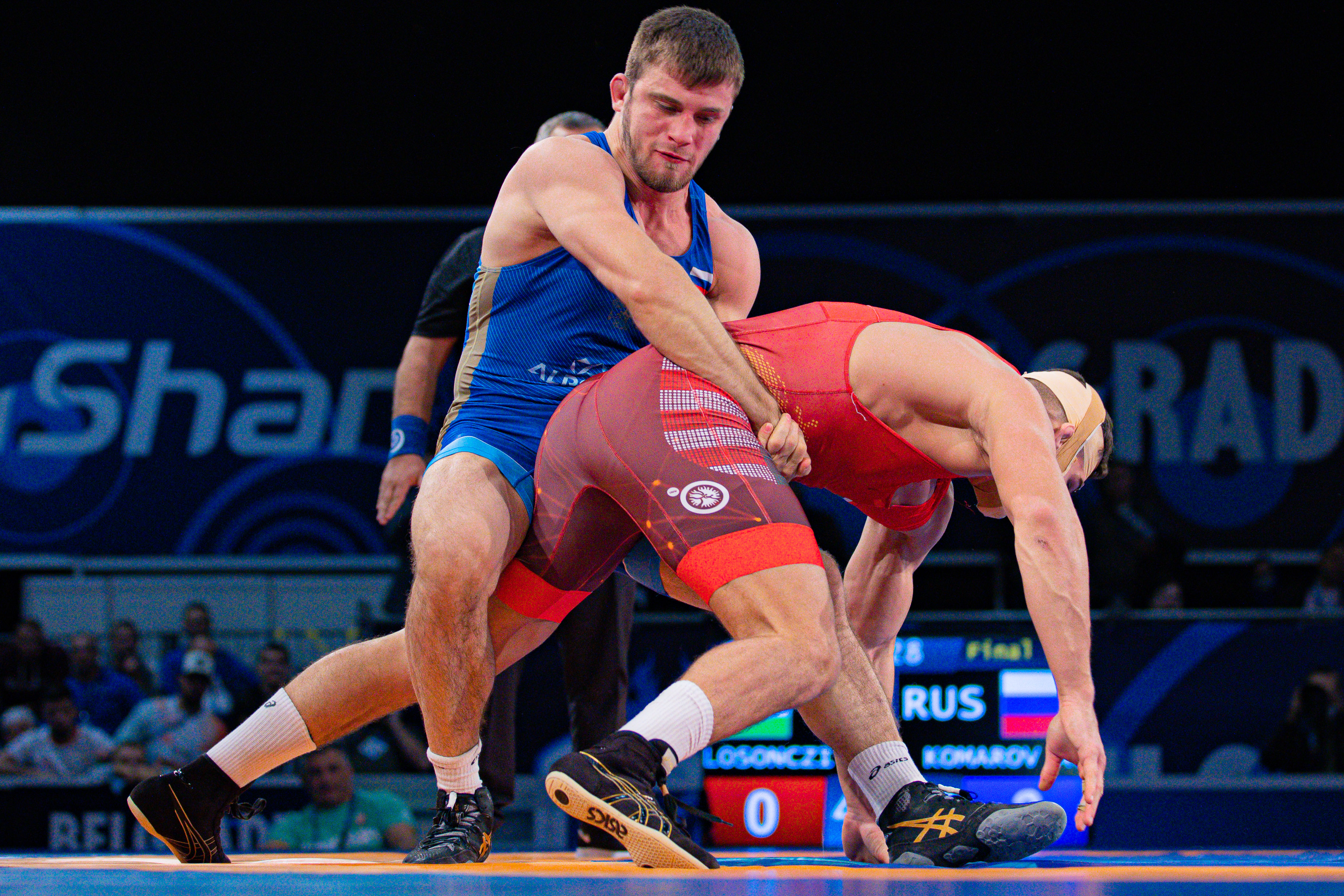 The second gold came at 87kg, as Aleksandr KOMAROV (RUS) ascended to the top of the fifth time in his career with a blistering 9-0 win over David LOSONCZI (HUN).

The young-up-and-coming Russian started the match on the slow foot but found his arm drag late in the first period and blew the doors off the bout. He led 3-0 but scored a pair of takedowns and two step-outs with that arm drag and closed the match out with a nine-point win.

Komarov last won one of five gold medals in age-group Worlds in 2018 and was relieved that he could do the same again.

"It's been a long time since I last won," Kamorov said. "But it would be definitely better to win the senior world than any age-group title."

The Russian had a tough road to the final and was tested at every stage, especially the semifinal against Temuri TCHKUASELIDZE (GEO), which he won 7-7.

"All my opponents were the leaders of our weight category," he said. "Wrestlers from Iran, India and even the semifinal was difficult. It's the first time when I had so difficult bouts one after another."

The 23-year-old wants to carry forward the age-group success into the senior category and win medals.

"Now it's important to get ready for the Russian nationals; I really want the gold medals on the senior level," he said. 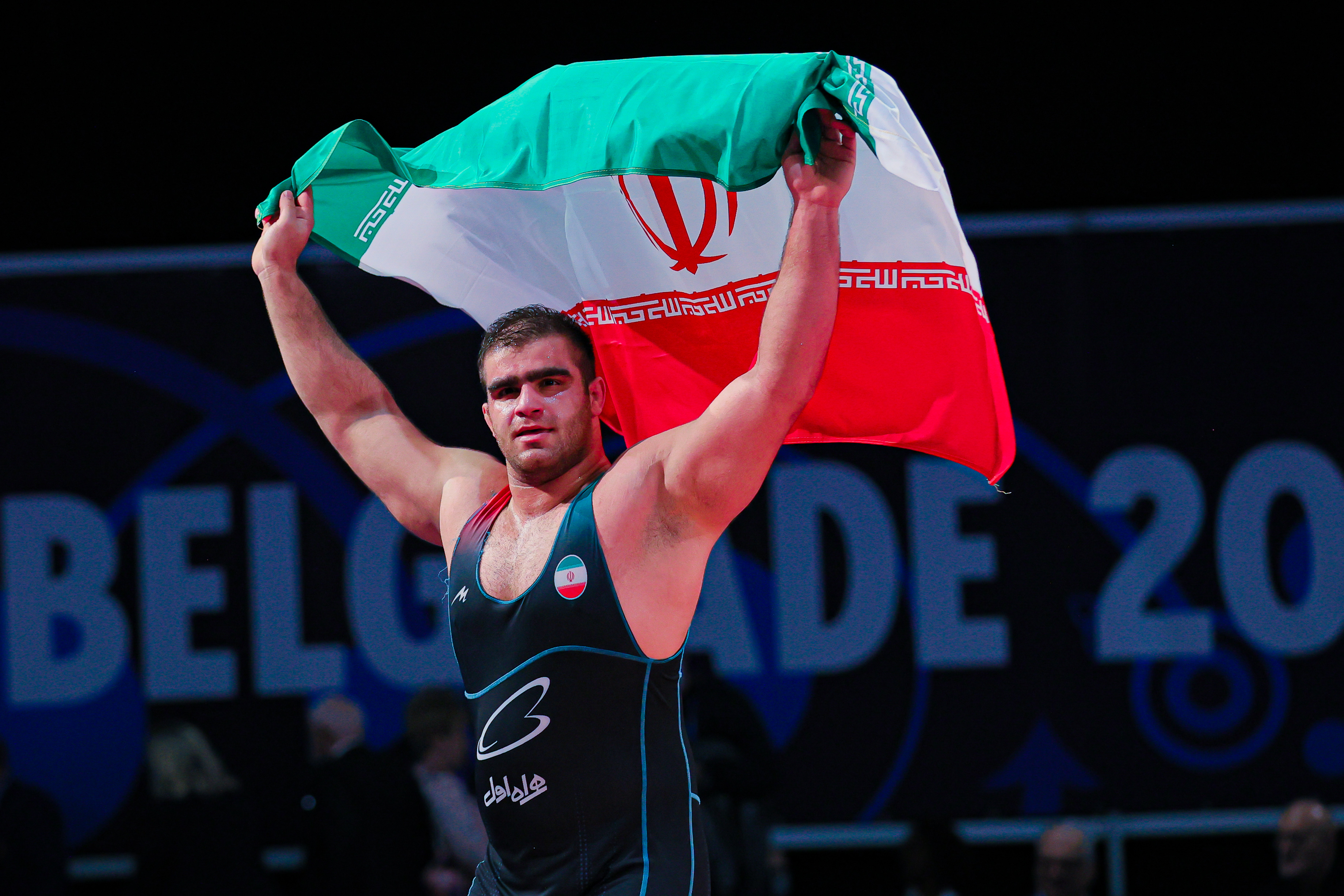 Iran capped the day with the gold medal after failing twice earlier in the evening as Tokyo Olympian Amin MIRZAZADEH (IRI) used a quick second-period takedown to move past David OVASAPYAN (ARM), 2-1, and won the 130kg titile. The final was a rematch from the 2018 Junior World Championships final which the Iranian won as well.

Mirzazadeh expressed his relief at winning the gold in a tough year which saw him finish fifth at the Olympics and battle with the COVID-19 virus.

Though he wanted to be a world champion in Oslo, he still was motivated for the U23 Worlds and became a champion in Belgrade.

"I kept myself hopeful [despite missing the Oslo tournament] and continued my training," he said. "Although victory in Seniors is sweet but being champion at U23 level is also valuable. It is a good step and will motivate me to continue."