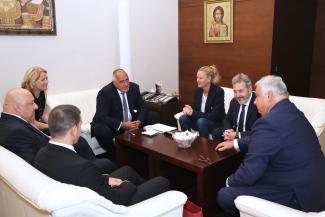 Several issues related to Bulgarian wrestling were discussed during the meeting with Lalovic, including the development of wrestling in Bulgaria, allocation of additional funding for women's wrestling and Bulgaria's bid to host the World Championships in 2023 -- which will serve as an Olympic qualification for the Paris Games in 2024.

Bulgaria is set to host the last Olympic qualification for the 2020 Tokyo Olympics.