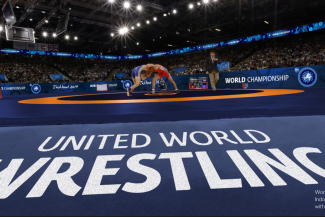 LAUSANNE, Switzerland (January 16) – After more than four decades without an upgrade to its sports presentation, United World Wrestling announced Thursday that it will be making substantial modifications to its wrestler and referee uniforms as well as changing the color of its competition mats.

The traditional wrestling mat colors of yellow and red, which were first adopted for the 1972 Games in Munich, will be replaced with dark blue and orange. The colors were chosen as part of a larger effort to improve the online and television viewership experience.

The wrestling uniforms, though not finalized in design, will come in a variety of colors and will be adapted to appeal to a younger audience. Referees, who once wore a suit and tie, will now wear a polo shirt and trousers.

“We are taking the steps to ensure that wrestling is attractive to viewers,” said United World Wrestling president Nenad Lalovic. “The traditional singlet is not something that is worn around the gym. We want apparel that our wrestlers and fans will feel proud to wear and we are going to make that happen.”

The final uniform designs for all three wrestling styles are in the development phase and will be approved later this year.

Lalovic and the United World Wrestling Bureau also passed several pieces of additional documentation, including the provisional recognition of the Wrestling Federation of Kosovo. Once finalized, Kosovo will increase the number of national federations to 179.

The Bureau also voted to rename all five of their continental councils under the banner of “United World Wrestling – Region” (Africa, Americas, Asia, Europe and Oceania). The streamlined naming will promote better name identification for the international federation and continental bodies.

The meeting took place a day after the organization’s successful launch of the “Super 8” campaign the international federation’s two-month campaign to raise awareness for women’s wrestling and grow female participation at all levels of the sport.