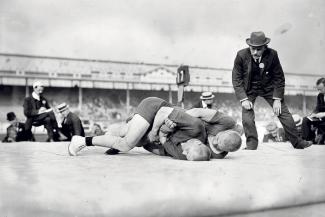 RIO DE JANEIRO (August 2) – Wrestling was one of the original nine sports contested in the revival of the Olympic Games in 1896. There were no weight categories and only one style, Greco-Roman.

Despite the name, “Greco-Roman” was a style of wrestling that became popular throughout Europe in the 18th and 19th centuries, but was more commonly known as “French wrestling” or “flat-hand” wrestling.

A soldier from Napoleon’s army, Jean Exbrayat, who traveled around the European countryside to wrestle at fairs and festivals, has generally been credited with setting out some of the basic rules of his style of wrestling.

Exbrayat called his style of wrestling “flat hand” wrestling to differentiate it from other “strong man” contests popular at the fairs that allowed striking with clenched fists. Exbrayat’s rules also attempted to limit holds employed only to inflict pain and dangerous wrestling.

One rule, also attributed to Exbrayat, did not allow holds below the waist which has become the most easily recognized characteristic of modern Greco-Roman wrestling.

About this time, sports leaders urged a return to the classic “ancient values” of Greece and Rome and against this background the popular style of wrestling on the continent became “Greco-Roman” -- or the “classic style” as some countries in Europe still call it.

One interesting frivolity missed in histories of Olympic Games wrestling is that the winner of the wrestling at the 1896 Games – Carl SCHUHMANN (GER), a gymnast from Berlin – also won three other events in Athens in gymnastics.

The winners in Athens were not awarded gold medals, but, instead, received silver medals with an olive branch.  The practice of awarding gold, silver and bronze medals began with the 1904 Games in St. Louis.

With his four victories, Schuhmann had more triumphs (“gold” medals) than any of the other athletes in the 43 events in Athens, making him the “Michael Phelps” of the Athens Games 120 years ago.

Wrestling was not included in the Paris 1900 Games, which were organized as a secondary feature to the World’s Fair that year, and wrestling in the St. Louis 1904 Games was contested only in freestyle and the only entrants and medal winners were from the United States.

Greco-Roman returned to the Olympic Program for good at the London 1908 Games and has been staged with freestyle from Antwerp 1920 to the present day.

With this limitation on what is technically or tactically possible in Greco-Roman, competitors attack the body in the standing position with bodylocks, headlocks and arm throws.

Because of the difficulty of getting locked around an opponent in the standing position, wrestlers will keep pressure on the opponent, hoping to catch him leaning the wrong way or to force a passivity call.

With the second passivity call, the active wrestler has a choice to remain standing or to put his opponent in the par terre (on the ground) position. Most wrestlers will normally choose the par terre position when given the choice.

In par terre in Greco-Roman, wrestlers look to expose the opponent’s shoulders to the mat with locks around the waist or chest and then a roll-through.

The reverse waistlock and lift – as in the iconic photo of a grimacing  Alexander KARELIN (RUS) in mid-lift -- as well as head-and-arm control from the front are also popular options in par terre since lifting the opponent from par terre can also be rewarded with extra points.

Given the difficulty of scoring in Greco-Roman, a win by technical superiority – commonly referred to as a “technical fall” – is awarded when a wrestler gains an eight-point advantage over his opponent.  In freestyle and women’s wrestling, the margin needed is 10 points. 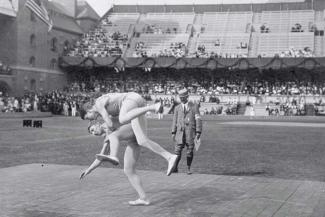 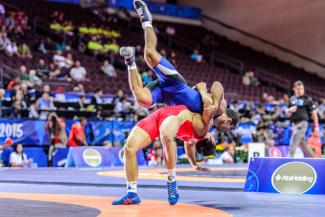