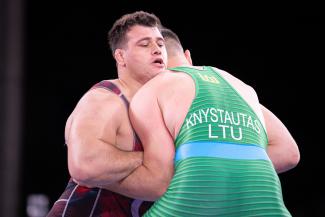 Turkey and Kazakhstan have the highest number of participants after the draw with 30 and 28 wrestlers respectively. They are followed by Azerbaijan (12), Uzbekistan (10) and India (9).

The bracket breakdown of the draw explains the possible match-ups and the ranking points on offer at the tournament.

Turkey will have selection bouts at seven weights -- 60kg, 63kg, 77kg, 82kg, 87kg, 97kg, and 130kg -- to select the third wrestler in each of those weights. These bouts will take place before the start of the tournament scheduled for 1030 hours local time. 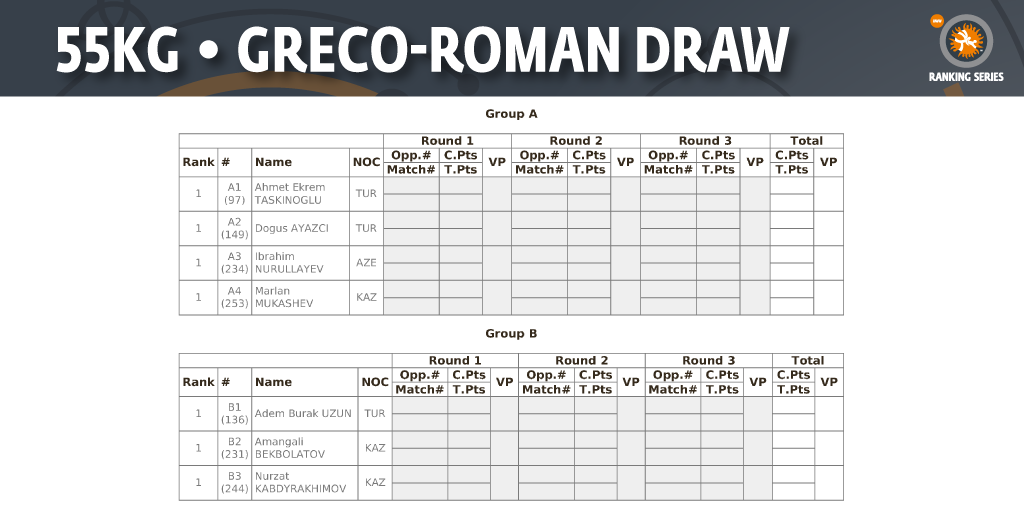 A third guy to keep an eye on in the 55kg bracket is Amangali BEKBOLATOV (KAZ). The last time he competed was the ’20 Henri Deglane, where he captured a gold medal. 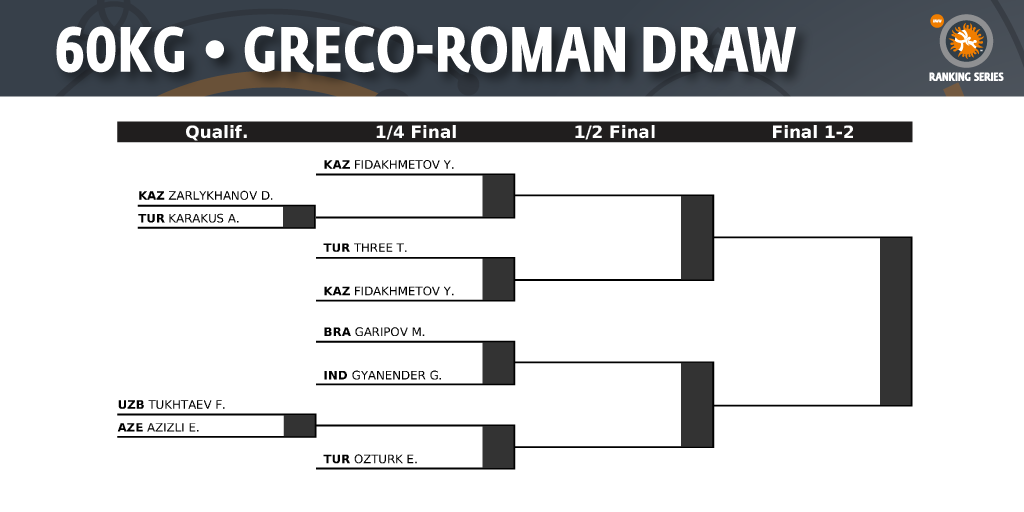 At 60kg, Ekrem OZTURK (TUR) and Eldaniz AZIZLI (AZE) could clash in a second-round matchup.

The Azeri, who won the ’18 world title at 55kg, would have to get past F. TUKHTAEV (UZB) in his first-round matchup to setup the matchup of ’21 European top-three finishers. 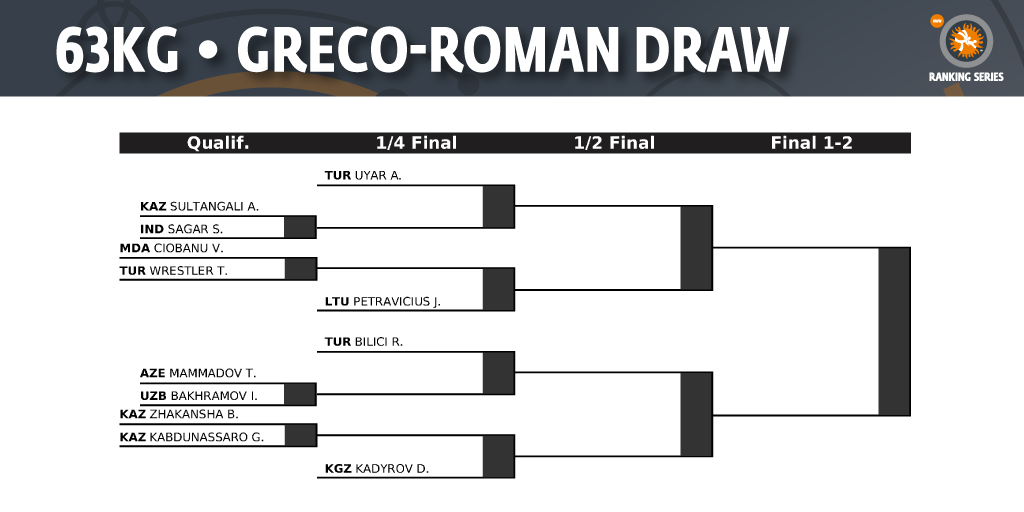 Reigning 60kg world champion Victor CIOBANU (MDA) is moving up a weight and sits on the top side of the chart. If he wins his first bout, he’ll square off with Lithuania’s Justas PETRAVICIUS for a spot in the semifinals.

On the bottom side, Taleh MAMMADOV (AZE) will square off against two-time Ranking Series champion Islomjon BAKHRAMOV (UZB). Mammadov is currently ranked sixth at 63kg with 25000 points. He can jump up to the third spot with a gold or silver medal in Istanbul. 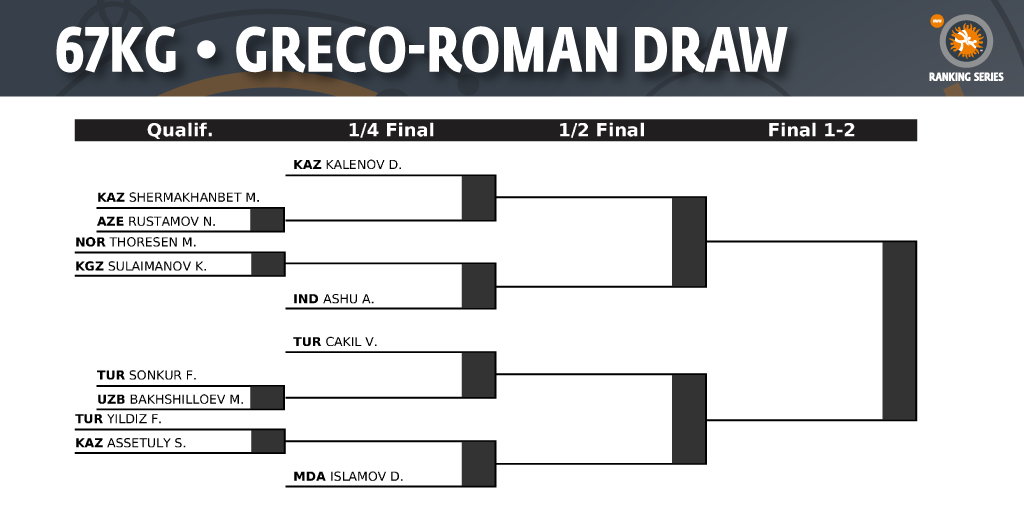 The top half of the 12-man bracket is highlighted by 2020 European champion Morten THORESEN (NOR) is likely to make a safe passage to the final. His biggest threat would be former Asian silver medalist Meiirzhan SHERMAKHANBET (KAZ).

Another Kazakhstan wrestler who can show up big time is 63kg Asian champion Sultan ASSETULY (KAZ). A second-round bout against Moldova veteran and continental bronze Donior ISLAMOV (MDA) could be his biggest test to make the final. 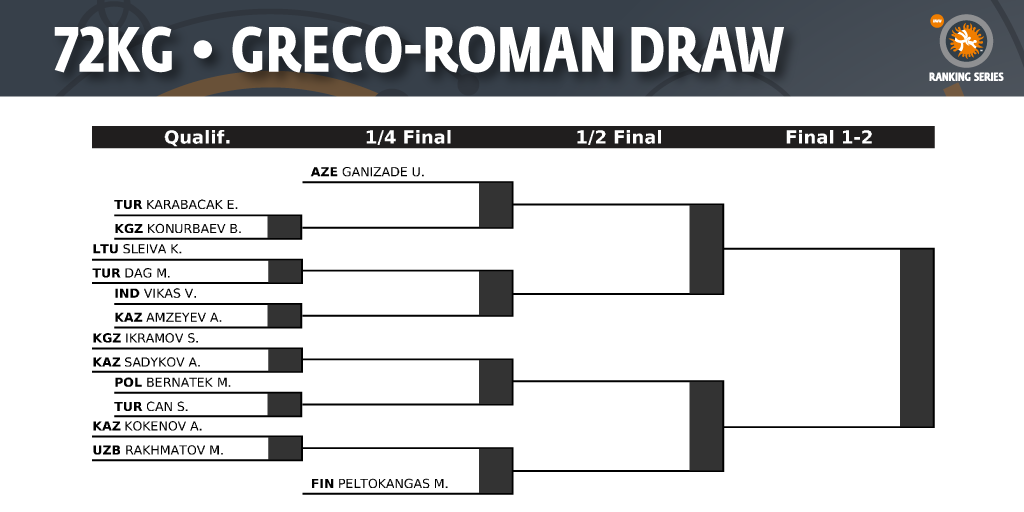 Third-ranked Kristupas SLEIVA (LTU) opens up his day on the top side against last year’s Vehbi Emre runner up Murat DAG (TUR).

Sleiva has 31000 points and is currently ranked third. A gold-medal finish will give him 11000 points [14 participants] and take him to 42000. He'd move ahead of current second-ranked Sergei KUTUZOV (RWF) who has 37000 points. Even if he finishes as low as eighth, the Lithuanian will be ahead of Kutuzov.

Other guys to pay attention to on the top side are Ulvi Ganizadeh (AZE) and Ensar KARABACAK (TUR).

Ganizadeh is a young stud who finished last year’s U23 World Championships with a bronze medal while Karabacak is looking to improve on his bronze-medal finish from last year’s Vehbi Emre.

On the bottom side of the bracket, the most credentialed guy is Poland’s Mateusz BERNATEK. Last year, he fell to Tokyo Olympian Mate NEMES (SRB) in the European finals and finished with a silver medal. 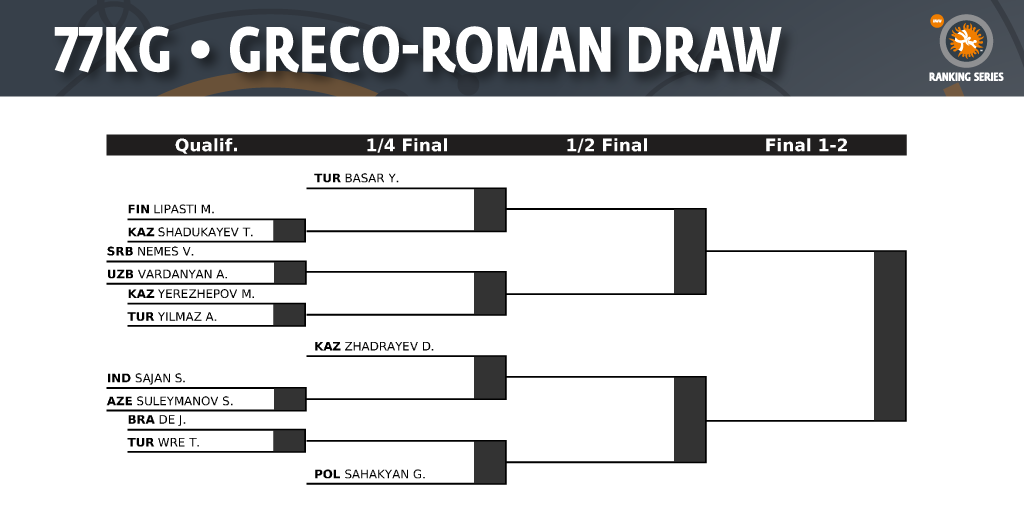 The top side of the bracket will be highlighted by the opening round matchup between Victor NEMES (SRB) and Aram VARDANYAN (UZB). The Serbian was a world champion in ’17 and a world bronze medalist in ’18, while the Uzbekistan wrestler was on the losing end of the world finals in Nur-Sultan.

The bottom side of the chart is highlighted by fifth-ranked Sanan SULEYMANOV (AZE). Last season, the Azeri fell in the world finals to two-time Olympic champion Roman VLASOV (RUS) and enters into the competition with 37000 Ranking Series points. He can break into top-three with a medal finish. A bronze would take him past third-placed Vlasov, who has 45000 points.

But to do so, he’ll have to get through India’s SAJAN. If he’s successful in that matchup, it would set up a colossal matchup of world runner-ups, where he’ll go toe-to-toe with Kazakhstan’s Demeu ZHADRAYEV.

The winner of Suleymanov and Zhadrayev will likely clash with last year’s world bronze medalist Gevorg SAHAKYAN (POL) in the finals. 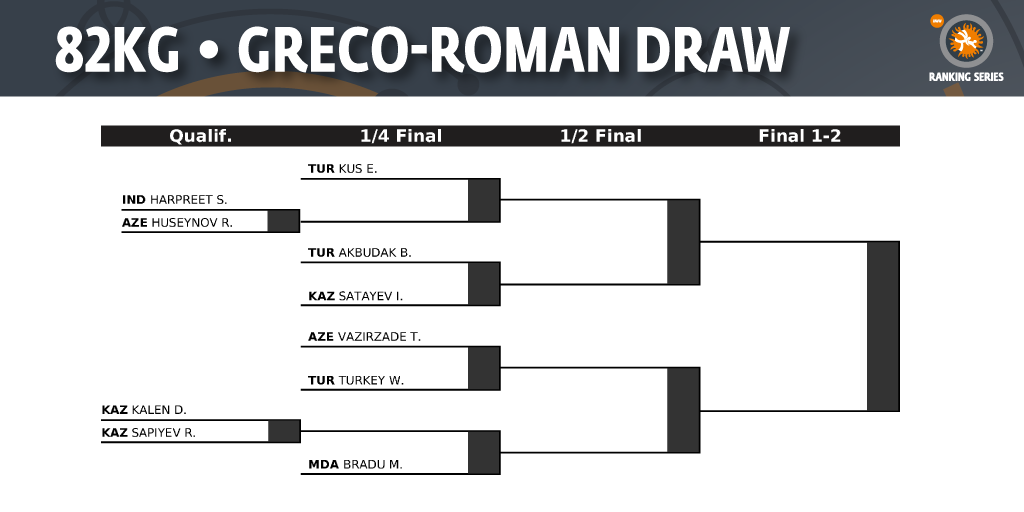 World champion Rafiq HUSEYNOV (AZE) headlines the 11-man bracket. He could meet Burhan AKBUDAK (TUR) in the semifinals which will be a rematch of the '21 World Championships from Oslo. Emrah KUS (TUR), who had defeated Akbudak at the Turkey national championships, is also on the same side of the bracket.

Huseynov and Akbudak are ranked first and second with 45000 and 37000 points, respectively. Akbudak cannot jump above Huseynov even with a gold medal. 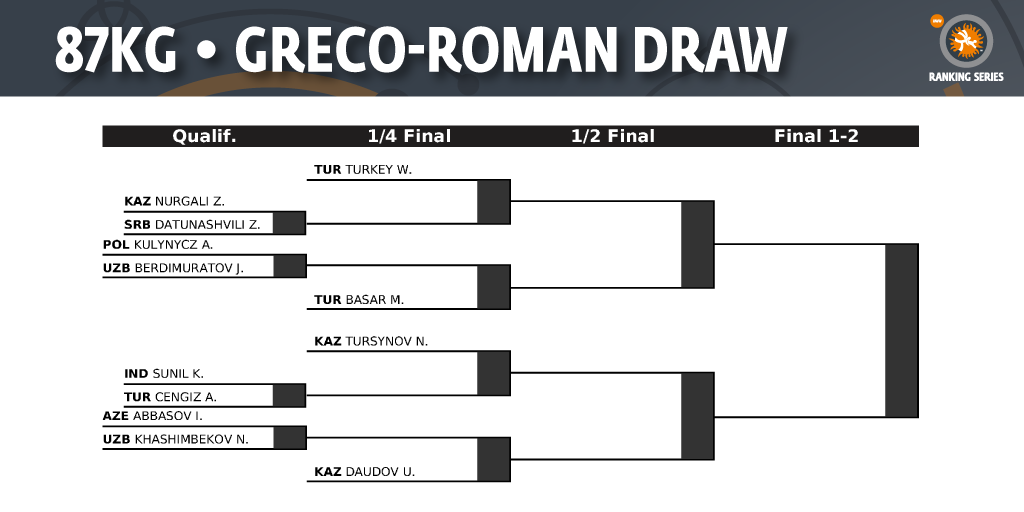 Olympic bronze and world champion Zarubi DATUNASHVILI (SRB) looks like a clear favorite to reach the final in Istanbul. His biggest threat could be 82kg Asian champion Jalgasbay BERDIMURATOV (UZB). The two are likely to meet in the semifinals.

Datunashvili will be consolidating his top position with gold as he increases his ranking points to 90200.

Arkadiusz KULYNYCZ (POL) can also improve his rank from seventh (31000 points) to top-three if he wins gold.

The lower side of the bracket can see a Sunil KUMAR (IND) vs Nursultan TURSYNOV (KAZ) bout with the former hoping to avenge his Asian Olympic Qualifiers loss from 2021. 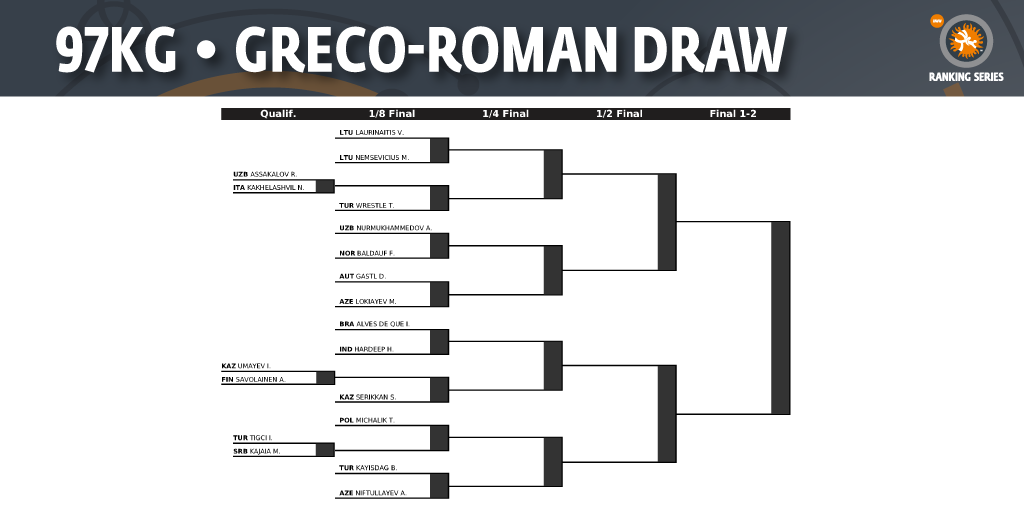 The biggest bracket of Greco-Roman, 19 wrestles, has veteran wrestler Rustam ASSAKALOV (UZB) wrestling European silver medalist Nikoloz KAKHELASHVILI (ITA) in the first round. The winner will likely be up against former European champion Felix BALDAUF (NOR) in the semifinal.

Tokyo Olympic bronze medalist Tadeusz MICHALIK (POL) and fifth-place wrestler Arvi SAVOLAINEN (FIN) can be the likely semi-finalists from the lower side of the bracket.

The Poland wrestler has a good chance to be in the top four if he can pull out a gold-medal win. He's currently ranked sixth with 34200 points but could jump to fourth with 13000 points. That will raise his tally to 47200 points. 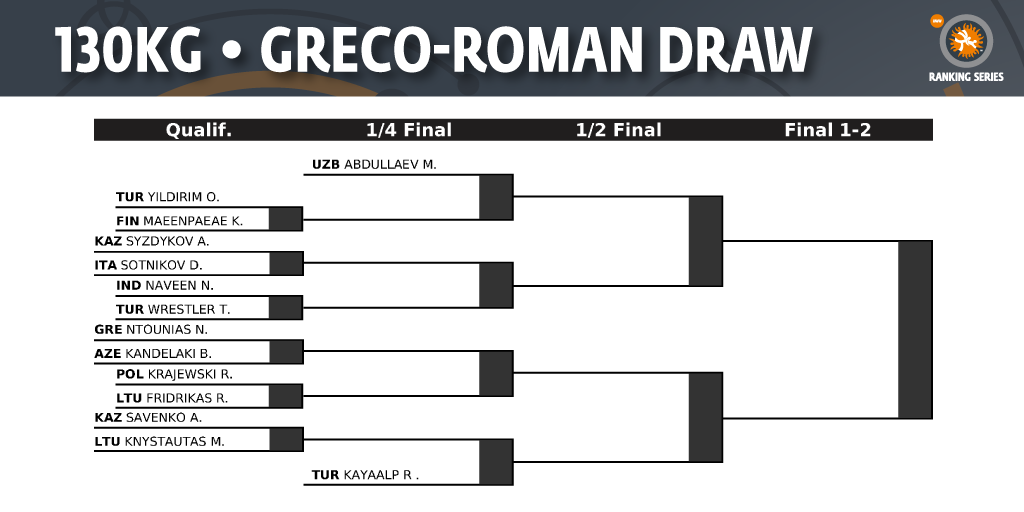 Home star and 10-time European champion Riza KAYAALP is the favorite to win the category. He is likely to face Mantas KNYSTAUTAS (LTU) in the quarterfinals, a rematch from the Tokyo Games which Kayaalp won 5-1. Kayaalp, however, should have a smooth-sailing to the gold medal bout.

A gold in Istanbul can give the Tokyo bronze medalist can help him jump from the seventh spot in rankings to fourth. He has 34200 points, and the addition of an 11000-point gold medal will give him 45200 points. That'd place him 200 points ahead of the current fourth placer, Aliakbar YOUSOFI (IRI).