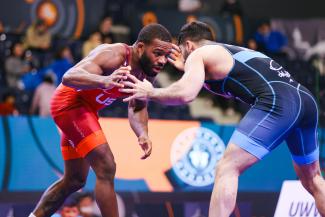 ISTANBUL, Turkey (February 27) -- Istanbul couldn't have asked for a better ending at the Yasar Dogu Ranking Series event -- even after a long day of wrestling, the best was yet to come.

Turkey and Iran had a pair of gold-medal winners out of the eight contested weights on Sunday.

Wrestlers from Kyrgyzstan and India won the 57kg and 61kg gold medals, respectively.

Burroughs' rise to the top of the podium four months after he won his fifth world title in Oslo was a testimony to the longevity and high-class wrestling that he still possesses. After overcoming Chance MARSTELLER (USA), 8-0, in the final, Burroughs said that he never felt better, thanks to not reducing weight to wrestle at 74kg.

"Yes, 79kg is comfortable for me," Burroughs said. "I am going to stay here until 2024 when I make my way down to 74kg to make the US Olympic team.

"People don't take it [79kg] seriously because it's not an Olympic weight. It's given me some rejuvenation late in my career. I'm 33-years-old and will be 34 in four months. I don't have to cut [too much weight]. I get to eat the things I want and training is more fun for me."

But come the '24 Paris Games, Burroughs will be back to his most successful weight, 74kg, in an attempt to win a second Olympic gold after the '12 London Games.

"I am going to be moving down," he said. "I cannot promise that I will make the [USA] team, but you know that I am going to give my best. It's effort, attitude and a warrior-like spirit. I am going to do my best to make the team. It's going to be a tough cut for me, but I'm committed."

Burroughs' stellar career began in Istanbul when he won his first-ever world gold medal in 2011. Reminiscing the memories, he said it is always great to be back.

"I didn't know what to expect in Istanbul 11 years ago, wow," he said. "The blessing was that I was young and naive and knew what I had. Denis TSARGUSH (RWF) was a reigning world champion at the weight class, and I had not wrestled him before. I had him in the second round.

"I was little nervous to be honest. Going to that tournament gave me a lot of confidence going forward because after winning that with very little freestyle experience, I thought about what I can do if I really train full time. The body of work has been something I have been grateful for. There are not a lot of people from that tournament that are competing and winning."

In the final Sunday, he began with an ankle pick, then added a stepout. A two-on-one to takedown transition gave him a 5-0 lead going into the break. In the second period, Burroughs scored another stepout before closing out the match with a takedown.

In his five bouts, Burroughs outscored his opponent 35-2. He got going with a 14-0 win over Meiir KOSHKINBAYEV (KAZ), then teched another Kazakhstan wrestler, Zhiger ZAKIROV (KAZ), 10-0. Gadzhimurad ALIKHMAEV (RWF) pushed him a little more than the others, but Burroughs was happy to outscore him 4-1.

"It [the tournament] was good," he said. "I think I got progressively better throughout the day. It was a tough tournament. I haven't wrestled five matches in a day since like 2015. I feel good about the bodywork I put in and feel blessed I am sore."

But the real drama occurred in the semifinal against junior Asian champion Ali SAVADKOUHI (IRI). The two were tied 1-1 with a minute remaining when Burroughs was put on the activity clock, meaning he had to score inside 30 seconds.

But midway after the clock began, the referee called Savadkouhi for a singlet-pull when Burroughs was in the middle of an attack, giving the USA wrestler a direct caution-and-one. Burroughs defended the final 10 seconds and won, 2-1.

"The semifinal was crazy," he said. "I've never wrestled him before. He's tough and I am sure I'll see him again in the future. He did a really good job of slowing me down."

"For me to get to guys that are intent on playing the shot clock passivity battle, I got to find a way to evolve on offense and find ways to score. The double wasn't there, and really no straight attacks. So getting angles and staying engaged with my hands and feet. "

Another Iran-USA bout of the day was the 70kg final in which Yazdani began with a slide-by to a gut for a 4-0 lead before Green hit a double-leg to make it 4-2 at the break.

The second period began with Yazdani being more aggressive and faking Green a few times before a single leg to a gut wrench gave him four more points. Leading 8-2, Yazdani brought the traditional Iranian underhook defense, and Green got no space to complete his attacks.

The gold ended a long drought for Yazdani, who had won four silver medals at different international tournaments in seven years.

"This is the first gold medal for me at any international tournament, and I cannot tell you how happy I am," Yazdani said. "I hope I made the Iranian fans happy."

"Green is a tough wrestler, but I was confident and had faith in my defense as well," Yazdani said.

Iran's second gold came at 92kg as Ahmad BAZRIGHALEH (IRI) stopped Erhan YAYLACI (TUR) from winning a third Turkish gold of the night. He scored a couple of stepouts and a takedown for his four points, while Yaylaci scored only one takedown.

The RWF got their answer to who would represent them at 65kg at the senior European Championships in Budapest, Hungary, next month after Mammedov stunned world champion Shakhiev with a 23-second fall in the final.

The 21-year-old locked Shakhiev's hands and spun him on his head to get two points. In the same sequence, he managed to roll Shakhiev and put both shoulders to the mat for the pin.

"I am very happy with the way I wrestled the world champion and secured a fall," Mammedov said. "In the whole tournament, I was constantly improving and my confidence was increasing.

"Now we will have a mini-trial for European Championship, but this gold against Shakhiev has helped me a lot in confidence."

Mammedov said he's not afraid of any name in the lot and was looking to wrestle some of those guys in Istanbul.

"I was waiting for Punia here," he said. "Sad he did not wrestle, but now I have planned for every wrestler, and I am not afraid to wrestle anyone. It's just a matter of time before I beat them."

At 61kg, a rematch of the Poland Open Ranking Series final between Ravi KUMAR (IND) and Gulomjon ABDULLAEV (UZB) saw frantic back-and-forth action in which the former came out on top, 11-10.

Abdullaev outclassed Kumar in Warsaw last year, and it looked like Sunday would be a similar story. The Uzbek scored early with a duck under, but as the bout progressed, Kumar upped the pressure and scored from double-leg attacks twice to lead 4-2 at the break.

A kip over to a high-crotch made it 4-4 for Abdullaev, and in the same sequence, he exposed Kumar on the edge to extend the lead 6-4.

Kumar then hit a four using a cradle to lead 8-6. But once again, Abdullaev came back and scored two points, and at the end of the scramble, the referees gave two for both guys, bringing the score to 10-8. Uzbekistan challenged and it was back to 8-8 with Kumar leading.

Kumar looked to take a clean lead when he shot for Abdullaev's leg but got countered and gave up two points with 22 seconds remaining.

As Abdalluev tried to catch his breath after a stunningly high-paced bout, Kumar used that as an opportunity and blasted a double-leg to make the score 10-10, taking the criteria advantage. A lost challenge from Uzbekistan made it 11-10.

"I had wrestled him in Ranking Series in Warsaw and lost," Kumar said. "But this time, it was better, and I was able to beat him. The bout was stopped several times, which I think worked against me because that gave him [Abdullaev] a lot of rest, and he was visibly tired."

Kumar has now wrestled at two tournaments this year. Apart from the Yasar Dogu, he won a silver medal at the Dan Kolov tournament in Bulgaria last week.

"I am coming after Tokyo, and it feels that I am in good shape," he said. "This final also helped me assess myself. Now the focus is on Asian Championships."

Turkey's two champions came in the role of veteran Soner DEMIRTAS (TUR) at 74kg and Osman GOCEN (TUR) at 86kg.

Demitras defeated Fazli ERYILMAZ (TUR), 11-0, in the final. The two exchanged ties early, but Demitras came out with a takedown and leg lace to lead, 7-0.  He added another takedown after the break to increase it to 9-0, the final score of the bout.

The 86kg home stars Gocen and Fatih ERDIN (TUR) slugged it out with the latter getting put on the activity clock. After giving up that point, he quickly scored a takedown to take a 2-1 lead, but a scramble resulted in Erdin's 4-2 lead at the break.

The second period saw more action as Gocen mounted a comeback. He scored two, bringing Erdin down in reverse, then gave up a point for reversal as the score changed to 5-4. Erdin scored another takedown and exposure to finish the bout 8-5.

United World Wrestling's action will now move onto the U23 European Championships that will begin March 7 to 13 in Plovdiv, Bulgaria.