Women in Wrestling: Leaders Reflect on Experience in WSLA Program 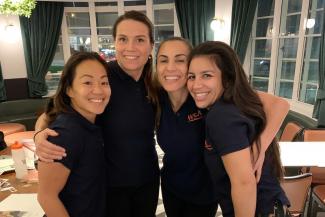 An assortment of IF's teamed up with the IOC's Olympic Solidarity program to offer the 14-month WSLA program for a limited number of high-performance coaches. The program was in direct support of Recommendation 6 of the IOC's Gender Equality Review Project, which seeks to increase the share of female coaches at the Olympic Games.

United World Wrestling was the instigator among five other International Federations to drive this first initiative of its kind for the development of women in coaching.

The coaches developed skills in many areas through the program, including developing effective leadership skills to further their development as coaches and leaders in wrestling. They completed activities and projects on their own throughout the 14-month program and spent the final two months attending multiple online sessions. The coaches also worked with a leadership mentor from WSLA and a sport-specific mentor to help improve specific leadership and sport specific competencies.

The women who participated in the program recently reflected on the experience.

Clarissa Chun: "The Zulu word 'Ubuntu' means I am because of you, you are because of me. This philosophy helps describe my experience in the Women's Sports Leadership Academy High-Performance Coaches Program. The program brought global perspectives, which sparked creative ways of working together. We expanded our leadership and communication skills and laid the foundation of a support network that will continue to grow as we share ideas and experiences beyond the WSLA program. Mahalo to everyone involved in the WSLA HPC Program. I would also like to extend my appreciation to United World Wrestling, USA Wrestling, and Olympic Solidarity in supporting my development as a coach."

Lotta Andersson: "The greatest thing for me about being a part of the WSLA program is meeting all of these strong motivated and successful female coaches from different sports from different parts of the world. I have a greater understanding of how important it is to have a strong network around you for support, motivation, and cooperation. Getting more and more women as coaches and leaders involved in high-performance cultures is important for the future. I think this means that more athletes also see the opportunity to continue living with sports as a profession. I also think it is important to make women realize that you can be just as good whether you have a male or female coach."

Diletta Giampiccolo: "The greatest gift the WSLA program gave me was the realization that I am not alone as a woman in the sports world. Since 25 women coaches in 6 Olympic sports from 5 continents participated in the program, I felt that I was a part of a great community. It made me realize that regardless of where you live and work as a woman, we all deal with the same problems. The WSLA program has taught me to reach out for help and if we work together nothing is impossible."

Jessica Medina: "I am extremely grateful to have had the opportunity to join the WSLA program. The course focused on key leadership skills that translate directly into high performance coaching. I was able to build a network of 25 coaches from 23 countries in 6 sports. We had the same challenges and we were able to support one another in overcoming obstacles including the COVID-19 pandemic. I'm grateful to United World Wrestling and the IOC for the support they have extended in supporting female coaches. The future is bright!"

The WSLA Leadership program was renewed for another year with dates to be defined in the coming months. Scholarship applications for interested individuals and NFs will be sent in due time.

For more information on the activities of the United World Wrestling development department check out www.unitedworldwrestling.org/development 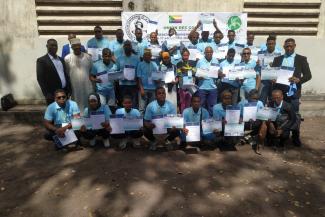 This course was delivered by Vincent AKA, United World Wrestling development officer. During this week, they were theoretical and practical of wrestling. To raise the technical level in wrestling, the emphasis was placed every morning and afternoon on the acquisition of basic techniques in Olympic wrestling on the mat.

This was an opportunity to discuss the ratings of wrestling techniques. This allowed the referees to make clarification on the knowledge of the points of the regulations relating to the situation of standing wrestling and wrestling on the ground.

To use all the key points to grow wrestling, it appears with the beautiful beaches in Comoros that to achieve the development of wrestling the interest of all clubs and wrestlers to use beach wrestling to contribute to a more exciting activity and promote wrestling by using the Beach.

Also, to start the process, during the course, while using Olympic style, the development officer proposes to use Beach Wrestling, which will be an opportunity to progress on growing wrestling in the whole Comoros.  from then on, the whole day of Wednesday was devoted to beach wrestling. This day was amazing as people on the beach join the participants and enjoy the activities.

That makes the President of the National Federation Mr. Abdallah and Mr. PAPA, Technical Director of the NOC said that: ``We have funded the key to promote and grow wrestling in Comoros”. We are going to use it Sundays when everybody comes to the Beach.

United World Wrestling continues its momentum to develop wrestling in the Indian ocean. Given the situation of the young Comorian Federation of Associated Wrestling, the development department under the leadership of Mrs. Deqa Niamkey has judged to send to the Comoros, Vincent AKA, Development Officer to provide real support to this young federation. By using the Olympic Solidarity course, United world wrestling create all the possibilities to use all stones on which to base the future development of wrestling in the Comoros.

United World Wrestling is determined through the new strategy led by President Nenad Lalovic to support the smaller federations to improve the development of wrestling in all regions of the world. Through its actions in the field, the development department remains the armed wing of the implementation of this vision.

United World Wrestling remains committed to spreading and growing wrestling in the world.