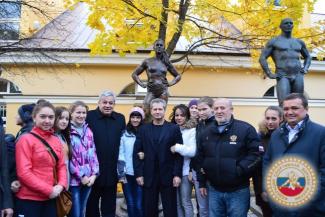 Vorobieva’s win over Stanka Vlateva of Bulgaria in the 2012 Olympic finals marked an important development in the development of women’s wrestling in Russia. The Russians have been a leader in men’s freestyle wrestling for decades, but has fallen short of Japan and other Asian countries in developing women’s wrestling.

The statue, which stands only a few feet from a similar statue of three-time Olympic champion Alexander Karelin, is on display outside the St. Petersburg high sports school (KSHVSM).

Vasily Kichedzhi and Yuri Avdeev, the head of the Committee for Physical Culture and Sport ,attended the event, though Vorobiev was in Moscow and could not attend.

""Everyday is dedicated to sports,"" Vorobieva told wrestrus.ru. ""Some day when I'm old and sick woman. I can come to this monument with his grandchildren and show them what their grandmother was a beauty at 22 years old (laughs).”

Vorobieva earned silver at the 2013 World Championships in Budapest dropping a late fall to Zhang Fengliu of China.

The female wrestler has become a minor celebrity in Russia since winning her Olympic title in London. Vorobieva was tabbed last week with the responsibility of carrying the Olympic torch on a portion of its route to Sochi for the start of the 2014 Winter Olympics.