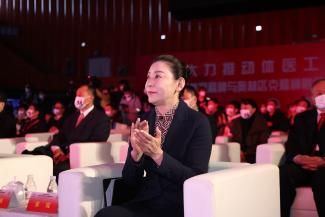 CORSIER-SUR-VEVEY (February 3) -- United World Wrestling Bureau member and former-President of the Chinese Wrestling Federation Zhang Xia was awarded the 2021 IOC Women and Sport Award for Asia. She has been an advocate for change and a leader in increasing the participation of women in wrestling, refereeing and coaching in China and across the globe.

"Winning this award means a lot to me, and I also feel more responsibility and mission," Zhang said. "In the future, I will work harder and devote myself to cultivating and discovering more high-level and high-quality female talents, and make greater contributions to the promotion of gender equality, the development of wrestling and the development of the Olympic movement."

As part of the award, Zhang will be receiving a trophy, certificate and the opportunity to apply for a Women and Sport Award project grant of up to USD 30,000. The grant is designed to support a project of the winner's choice that relates to one or more of the IOC’s Gender Equality and Inclusion focus areas (Participation, Leadership, Safe Sport, Portrayal, Resource Allocation).

The current vice-director of Beijing Sports Bureau, Zhang was the first-ever female wrestling world champion in the 53kg weight category at the 1991 World Championships and has officiated at the highest-ranking referee category since 2000. She performed her duty at four Olympic Games (2004, 2008, 2012 and 2016), five Asian Games (2002-2018) and numerous UWW-sanctioned World Championships. She was awarded the Golden Whistle Award at the 2008 Beijing Olympic Games.

Through these programs, over 300 young women were introduced to refereeing, and the number of licensed international elite-level female referees has reached a record growth of 28%, from 64 in 2018 to 82 in 2019.

It was Zhang who promoted women referees in Asia with eight referees from Iran, China and the Democratic People's Republic of Korea being promoted as international referees in 2018-2019, including former Olympic champions.

Promotion of women wrestlers, coaches
Zhang organized a coaches' clinic during China's 2019 National Championships held from May 24-26 in Qian’an province and ensured that 50 percent of the participants were female coaches,

The UWW Women’s Wrestling Ranking Series -- 2019 China Open -- was organized on June 22-23, in Taiyuan, China. Later, the 2019 Asian Championships were successfully organized on April 23-28, in Xi’an, China. Refereeing clinics and training camps for women were also organized together with UWW.

Zhang encouraged women involved in wrestling to take up leadership positions, as exemplified by the Olympic medallist SUN Yanan (CHN). With the guidance and support of Zhang, former world champion Sun, who won the UWW Best Woman Wrestler award in 2017, was elected a member of the UWW Athletes Commission in 2017.

Initiating ‘Best Wrestlers of the Year’ Awards
The first edition of the Best Wrestlers Awards was organized in Beijing during the annual assembly of the Chinese Wrestling Federation, held from January 10 to 11, 2020. Top women wrestlers, including the 2019 World Championships silver medalist Ron Ningning, and others, were named as ‘Best Women Wrestler of the Year’.

In collaboration with UWW, two training centers were established in China.

In addition, national training centers for wrestling were established in Yunnan, Hainan, Shanxi and Sichuan provinces in China since 2020.