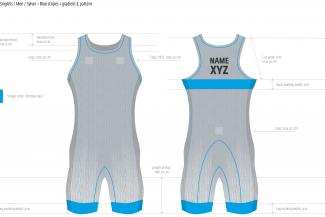 The main improvement comes in allowing national federations to honor their home colors through light and dark versions of the competition uniform. The new scheme replaces the once-standard red and blue uniforms, which made distinguishing between competing nations it difficult for some fans.

Red and blue markings will still be incorporated into the light and dark uniform scheme.

The uniform change come after the IOC’s recent adoption of Agenda 2020 and recommendations made in the wake of the 2013 campaign to Save Olympic Wrestling.

“We hope that these adjustments will help generate even more interest in the sport of wrestling,” said United World Wrestling president Nenad Lalovic. “We are continuing to innovate our sport and take seriously the recommendations of the IOC and the goals of Agenda2020. Their support has been vital to this process.”

The new uniform guidelines will be in effect for Olympic Qualifying events in Ulaanbaatar, Mongolia (April 22-24) and Istanbul (May 6-8).