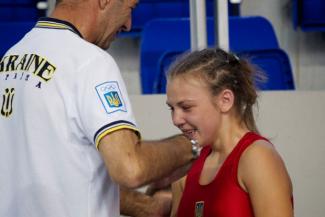 Katarina Mashkevych (UKR) shares a teary-eyed celebration with her coach moments after winning the 49kg bronze medal on Thursday in Zrenjanin.

With the Greco-Roman boys wrapping up their part of the competition on Wednesday, day three of the Cadet World Championship showed crowds in Zrenjanin just how fierce the girls can be.  The U.S. and Russian teams were strong favorites to outshine the rest, but it was Ukraine that got a large chunk of the women’s freestyle glory at the Kristalna Dvorana.

Kateryna Mashkevych snatched the 49kg bronze with an impressive win over Daniela Lopez Mejia from Mexico and confirmed the team triumph that compatriot Oksana Livach initiated with her gold in the 38kg category.

Livach reached the final by leaving a string of champions in her wake, among them now former world champion Marina Doi of USA and European champion, Russia’s Aleksandra Skrilenko. An estatic Livach celebrated her gold medal win over Romanian Cristina Zoltan, but it was obvious that showing her superiority over the American and Russian girls earlier in the competition was just as important.

Ukrainian team coach Oleh Pavlovic agrees, adding that there were no words to explain how big both triumphs were for the former Soviet country.

“I’m still speechless with pride. Oksana lost the European gold to Skrilenko from Russia just a couple of months ago, and that semi-final win and this gold show just how much she’s improved and what she can do. And beating former world champion Doi in the first round only adds to the importance. It’s always a rush getting revenge and beating the number one,” he added with a laugh.

“Both girls showed confidence and maturity on the mat, and the team and the sport can only progress further. Promoting women’s wrestling in Ukraine is not an easy job but we seem to have great ambassadors for it! The girls were outstanding and will send a picture out into the world that wrestling is not just a men’s sport but that girls can have their say and be national heroes at it too,” Pavlovich beamed, no doubt rushing off to congratulate his girls yet again.

Marina Doi may have lost her world champion title to Livach, but she didn’t lose out on a medal. Doi battled her way through the repechage to beat European champion Skrielnko and win the 38kg bronze for USA.  The U.S. Team had a disappointing start to the day with only Cadance Lee (49kg) making it through the first round, but ended up with two bronze medals to show for themselves.

The second bronze came from Teshya Alo in the 56kg category, as she pinned  Norway’s Grace Bullen in style and ended USA’a slow day with a triumph.