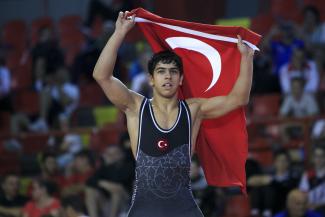 SKOPJE, Macedonia (May 15) – Armenia, Russia, and Turkey came into Tuesday nights finals with a pair of wrestlers searching for Cadet European titles, but Turkey was the only nation to claim more than one gold medal.

Uzun, the fifth-place finisher at the 2017 Cadet World Championships stopped Khndzrtsyan’s shot attempt and spun behind to pick up his first two points. The Turkish wrestler immediately rolled into a sequence of four gut wrenches to take the 10-0 win.

Hamza ALACA (TUR) gave Turkey their second gold medal of the night with a 12-2 routing of Stanislav NOVAC (MDA).

Alaca, the two-time Cadet European bronze medalist trailed 2-0 in the first period after giving up an early takedown. He regained the lead with a four-point sequence and ended the match outscoring Novac 12-0 to take the 60kg crown.

Armenia, Georiga, and Russia were the remaining nations who claimed a gold medal on the second day of wrestling in Macedonia.

Harutyunyan collected the Armenian flag from the blue corner after picking up the 10-0 technical superiority victory 24 seconds into the seconds period by jumping to a pair of trapped arm gut from a swing single.

Gagnidze trailed early but ended the first period with a four-point throw, taking the 4-3 lead into the final period.

The Russian wrestler nearly picked up a takedown with an underhook throw-by but stepped out before the takedown was awarded. After a failed Russian challenge, Gagnidze commanded the 6-3 lead with 17 second left.

Abuzagidov used a two-point head pinch to move to within a point, but time expired and Gagnidze was victorious 6-5.

At 92kg, Gadzhi GAMZATOV (RUS) claimed the final gold medal of the day, giving Russia their lone champion by after trading blows with Johannes MAYER (GER) in the 18 point gold medal bout.