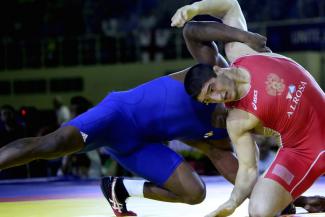 The Russian freestyle team was expected to perform well in Tashkent, but few could’ve predicted that Russians would capture home five of the eight gold medals up for grabs.

Fewer still could’ve predicted that 18-year-old Abdulrashid SADULAEV, who only last year was competing in cadet-level tournaments, would have freestyle wrestling's most succesful season.

The biggest freestyle star in 2014, Sadulaev cobbled together an undefeated season en route to winning the Ivan Yarygin, Yasar Dogu, Waclaw Ziolkowski Memorial, European and World Championship. His Russian teammates rotated weight classes and starters throughout the season, but at every major event it was Sadulaev who both entered and took home the title.

In addition to Sadulaev, the Russians cleared out the middle weights winning five straight titles: Soslan ROMANV (65kg), Khtog TSABLOV (70kg), Denis TSARGUSH (74kg) and Abdusalam GADISOV (97kg). and The performance was the second-best by a Russian team since 1997 when the team returned from the world championships with six of ten gold medals.

The most discussed title was for Tsargush who outlasted two-time world champion and 2012 Olympic champion Jordan BURROUGHS (USA) in the semifinals en route to winning his third world title. The rivalry between the two wrestlers had been on hold since 2012 when Tsargush failed to make the 2013 team. However, back in competition the 31-year-old Russian found his pace against Burroughs and went on to defeat Japan’s Sohsuke TAKATANI in the finals.

Longtime friends and training partners Romanov and Tsablov were unexpected champions, with neither being the definitive starter for much of the year. Despite their late emergence the duo impressed at the world championships with creative finishes and punishing defense.