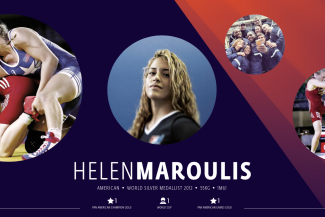 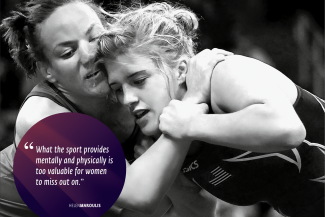 How and when did you get started in wrestling?
I began wrestling when I was 7 years old, pretty much by mistake. My younger brother was on the wrestling team but there were not enough kids and he never had a partner to drill with. My mom did not want to make him quit so she told me to jump in and be his partner instead. After two weeks of wrestling, I told my dad I wanted to compete and he made a bet with me. The bet was if I won my first match I could continue wrestling. That was the only match I won all year so, needless to say I won the bet.

How do people react when you tell them you are a wrestler?
Throughout the years, I have received many different responses from people when I tell them I am a wrestler. Many ask if it is even a sport offered for women, some ask if I mean “mud wrestling”, and I have had others respond with “if you’re a wrestler how come you don’t look butch”. Overall, most people are impressed and interested when I explain the sport of women’s wrestling to them.

What’s your best memory of wrestling?
My best memory from wrestling so far was winning the Pan American Games in 2011. I wrested a bunch of tough competitors and it was my first Games experience. The coaches, teammates and everyone on the trip were really great that year and it made the whole experience really special for me.

Who has been the biggest inspiration during your life in wrestling?
The biggest inspiration in my life so far for wrestling has been my parents. My dad loved wrestling but gave it up after high school to focus on his career. My mom, although never a wrestler, did everything she could to help me succeed at being one. My wrestling related inspiration would be the 2004 women’s wrestling Olympic team I attended the national training camp when I was 13 years old and it changed my life to be around all these strong, determined, hard working women who were chasing the same dream I wanted to. Also, my coach Seiko Yamamoto is a huge inspiration to me now.

What’s your favorite thing about wrestling?
I love how wrestling allows everyone to have their own unique and individual style. I also love that there is always uncertainty in every match. It’s not a sport where you just do the same routine over and over again because your competitors force you to adapt and I find that challenging and fun.

What advice would you give to girls who want to start wrestling today?
Girls should definitely try wrestling, even if they only do it for a little bit. It teaches you a lot about yourself and cultivates good characteristics in individuals. Like anything in life, there may be some challenges but I would say “believe, and keep with it!”, because in the end it is so worth it.