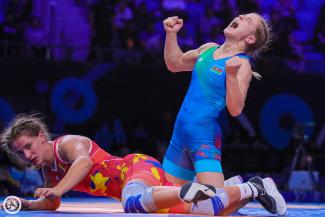 CORSIER-SUR-VEVEY, Switzerland (January 10) – Mariya STADNIK (AZE) officially put an end to the rumors that she’s hanging up her wrestling shoes, as she told United World Wrestling she's committed to competing through the 2024 Paris Olympic Games.

There was a slew of retirement announcements following the Tokyo Olympics, and it was heavily speculated that the 33-year-old mother-of-two would call an end to her career after she won a bronze medal at the Tokyo Olympic Games – her fourth Olympic medal in as many tries. But the nine-time European champion (seven European Championships and two European Games) squashed the rumors, saying she still believes in her potential and has a burning passion for the sport.

“I think that as long as I have the desire to wrestle, I should fulfill all my potential,” Stadnik said. “I made this decision to continue wrestling as soon as I came back home [from Tokyo]. All my relatives and friends believe in me very much.  My son wants me to go on wrestling because he says I am very strong.”

Stadnik, who has a combined ten Worlds and Olympic medals and only ten losses since she made her senior-level debut at the 2008 Golden Grand Prix in Baku, sits alongside Kaori ICHO (JPN) and Saori YOSHIDA (JPN) as the only women in the Games history to claim a quartet of Olympic medals.

If she reaches the podium in Paris, she’d become the first-ever wrestler – male or female – to win five Olympic medals in one style. Furthermore, if Stadnik wins that long-awaited Olympic gold, she’d become the oldest Olympic champion in women’s wrestling by a long shot.

Icho, who won her Rio Olympic title at 32-years-and-2-months-old, holds the current record. Stadnik will be 35-years-and-8-months-old during the ’24 Paris Games.

But Stadnik, who won a bronze in Beijing and silver in London and Rio, understands that to sustain greatness at her age, she has to listen to her body and can’t compete as often as she once did.

“Competing four or five tournaments a year is perfect for me,” Stadnik explained. “The only problem I might have before going to Paris is I don’t know how my body would react to training. I have some experience that I need to use in the right way in order to compensate for that energy I had when I was 20 years old.”

Owing to a similar reason, the 2019 world champion has limited her participation in tournaments in past. In 2019 and 2021, she participated only in two competitions each year, perhaps to keep her body healthy and reduce the burden of cutting weight before competitions. Although she didn’t say when she plans on lacing up her shoes next, Stadnik is expected to compete at the ’22 European Championships in Budapest, Hungary (March 28 – April 3). World-renowned expert Gabriela Mueller spearheaded the course with over 40 participants -- 95% women – from all five continents.

The objectives of the Women Lead Sports Master Program were to empower participants to shape the future of wrestling as a global sport, increase a diverse talent pool in leadership within UWW at all levels, and to learn effective leadership strategies, techniques, and applicable tactics that work today.

“Despite the challenges related to COVID, we managed to organize another successful virtual leadership programme to advance the gender equality topic in our sport. As part of the strategic plan 2022-2026, we hope to see more women and men of the future generations in leadership positions,” said Deqa Niamkey, UWW’s Development Director.

Participants learned valuable communication tactics that’ll assist them in negotiations and persuasions through the course’s interactive breakout sessions and discussions. They also learned how to build their personal power and influence and how to use them when persuading voters and key decision-makers.

“United World Wrestling and Deqa Niamkey, with her Leadership, once again models what leaders do: empower new leaders who empower more leaders.” She continued, saying, “to the team, to every participant who is now proudly displayed as a graduate of the program and amplifying their impact under," said the award-winning trainer and coach, Mueller.