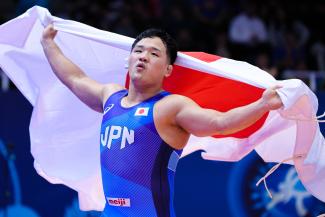 U23 Worlds: For Tevanyan, first title worth the wait 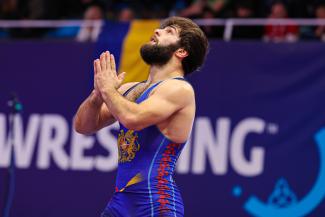 PONTEVEDRA, Spain (October 22) -- Vazgen TEVANYAN (ARM) rarely expresses emotions on the mat. A rather calm personality during the bout, Tevanyan wore a worried look as the referees reviewed a challenge from Hamza ALACA (TUR).

With 20 seconds left in the 65kg gold medal bout at the U23 World Championships in Pontevedra, Spain, Tevanyan led 7-2 but Alaca got a gut wrench in which he spun Tevanyan 360 degrees hoping to get four points. The referees, however, awarded only two.

Even a successful challenge would only make it 7-6, Tevanyan did not want to be in a situation where the match can see more twists. And though there were no surprises at the end as Alaca lost the challenge and only got two points, it was a relief for Tevanyan than a celebration.

He thanked the small group of Armenian fans that were present in the Municipal Pavillion in Pontevedra before the victory lap as he captured his first-ever world title.

"Only at the end of the match, when there was a challenge, I was worried," Tevanyan said.

If you are wondering why it was such a big deal, Tevanyan remembers the last U23 World Championships in which he finished as the silver medalist. In the final 10 seconds, he gave up a takedown and then Ernazar AKMATALIEV (KGZ) spun him for two. And what Alaca did was similar to that.

Akmataliev won the gold last year at 70kg. Tevanyan did not want to finish with silver again.

"I have been waiting for so long to become the world champion," he said. "I was going to Belgrade to win the gold but seems like I wasn’t prepared enough. Last year I was wrestling at 70kg weight class."

Ever since bursting onto the scene for beating Iszmail MUSZUKAJAEV (HUN) in the 65kg final at the 2020 Individual World Cup in Belgrade, Tevanyan has shown the spark but he failed to light it on the big stage.

In March 2021 he defeated Haji ALIYEV (AZE) but failed to win at the Olympics and finished ninth at the 2021 World Championships. But is slowly working out for him in 2022. He won the prestigious Takhti Cup in Iran, and almost reached the bronze medal bout in Belgrade before capping off the season with a world title.

"I have been working hard together with the coaches," he said. "We corrected all the mistakes, and now you can see the result of our hard work."

In Pontevedra, he captured the 65kg gold with the win over Alaca to finally emerge as one of the wrestlers to take over 65kg. In the semifinals, he defeated Adlan ASKAROV (KAZ) 7-6 in an evenly fought bout. Japanese youngster Ryoma ANRAKU (JPN) also troubled Tevanyan but the Armenian managed to win 5-4. 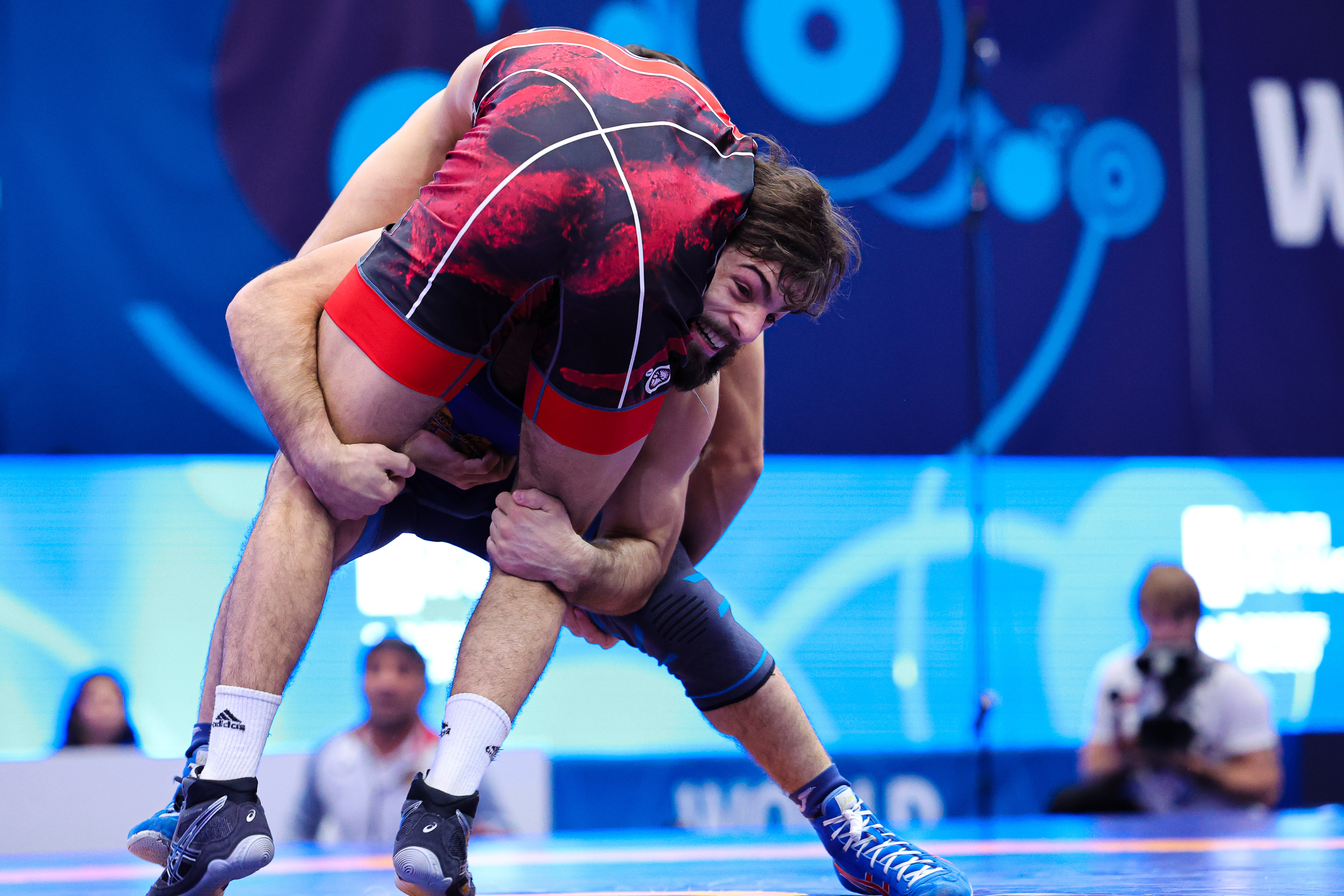 In the final, he was leading 3-2 with a minute remaining when he got the arm trap and extended his lead to 7-2. But he still countered later in the bout. Luckily, it was only for two points and not four for Alaca.

"That was an interesting final," he said. "The opponent was very good. I wouldn’t say that the beginning of the match was intense but later during the challenge, I was worried  if they will give 2 or 4 points."

The Tokyo Olympian will now try to qualify for the Paris Olympics at the 2023 World Championships next year.

"I will now go back to Armenia, get some rest and start training even harder for the next year because the next year is very important since there will be Olympic qualifying World Championships," he said. 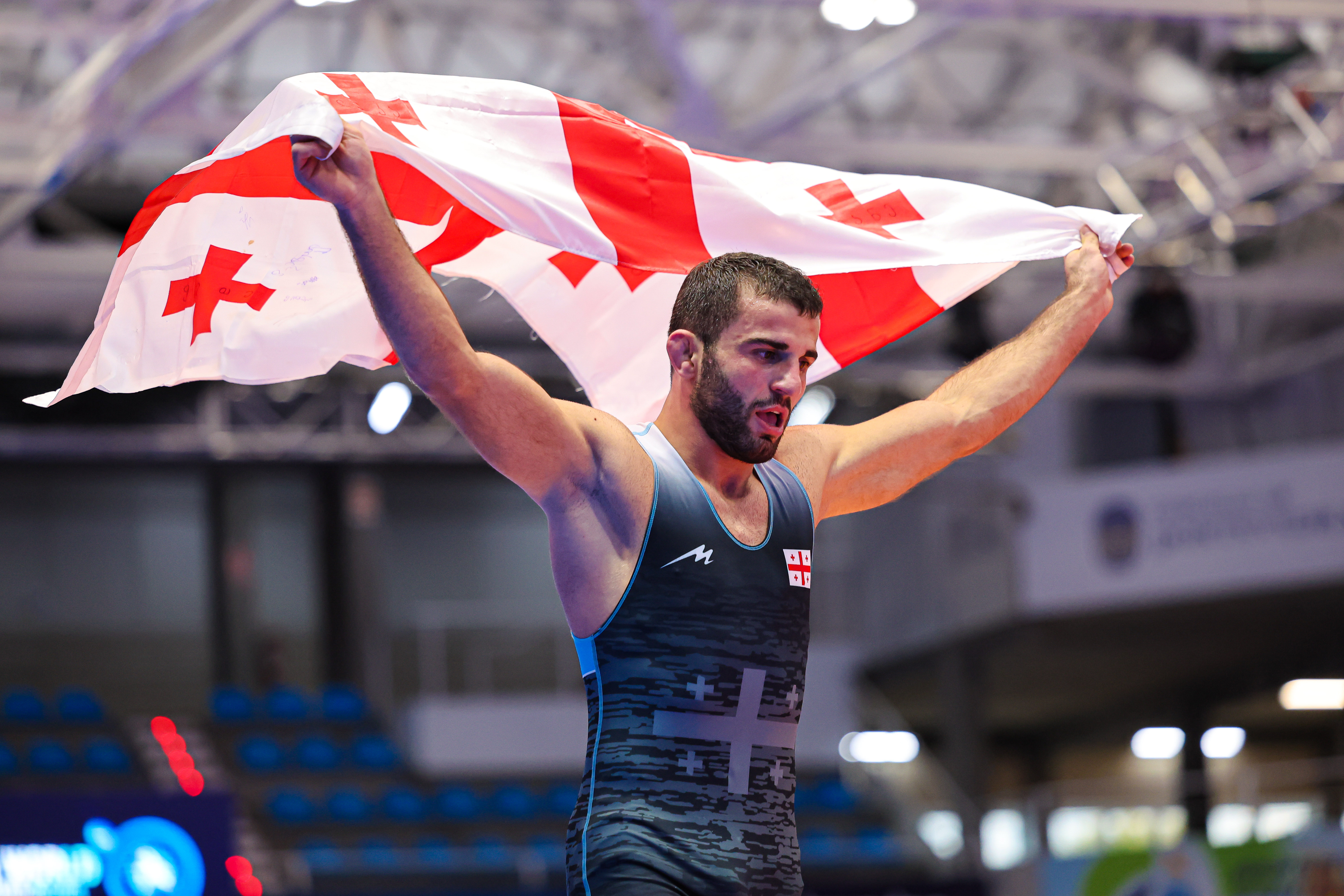 While Tevanyan ended his title drought, it was yet another silver at World Championships for Amirmohammad YAZDANI (IRI) who lost the 70kg final against U23 European champion Giorgi ELBAKIDZE (GEO) in a dramatic manner.

The favorite Yazdani led 2-2 at the break and got involved in a bearhug with Elbakidze which ended in a disaster for him. Elbakidze never let off his grip and Yazdani landed on his back as he tried a big throw. Elbakidze led 6-2 and Yazdani looked desperate.

Elbakidze avoided contact and it was just over a minute left that Yazdani was able to score a takedown, cutting the lead to 6-4. Then he got a lifeline.

Elbakidze was put on the activity clock and Yazdani had to play out the 30 seconds and needed a takedown to win. But Elbakidze shot a double-leg which Yazdani defended for a while but ultimately fell to the pressure, canceling out the activity clock. Nothing worked for him and he ended with his third silver in as many World Championships finals. 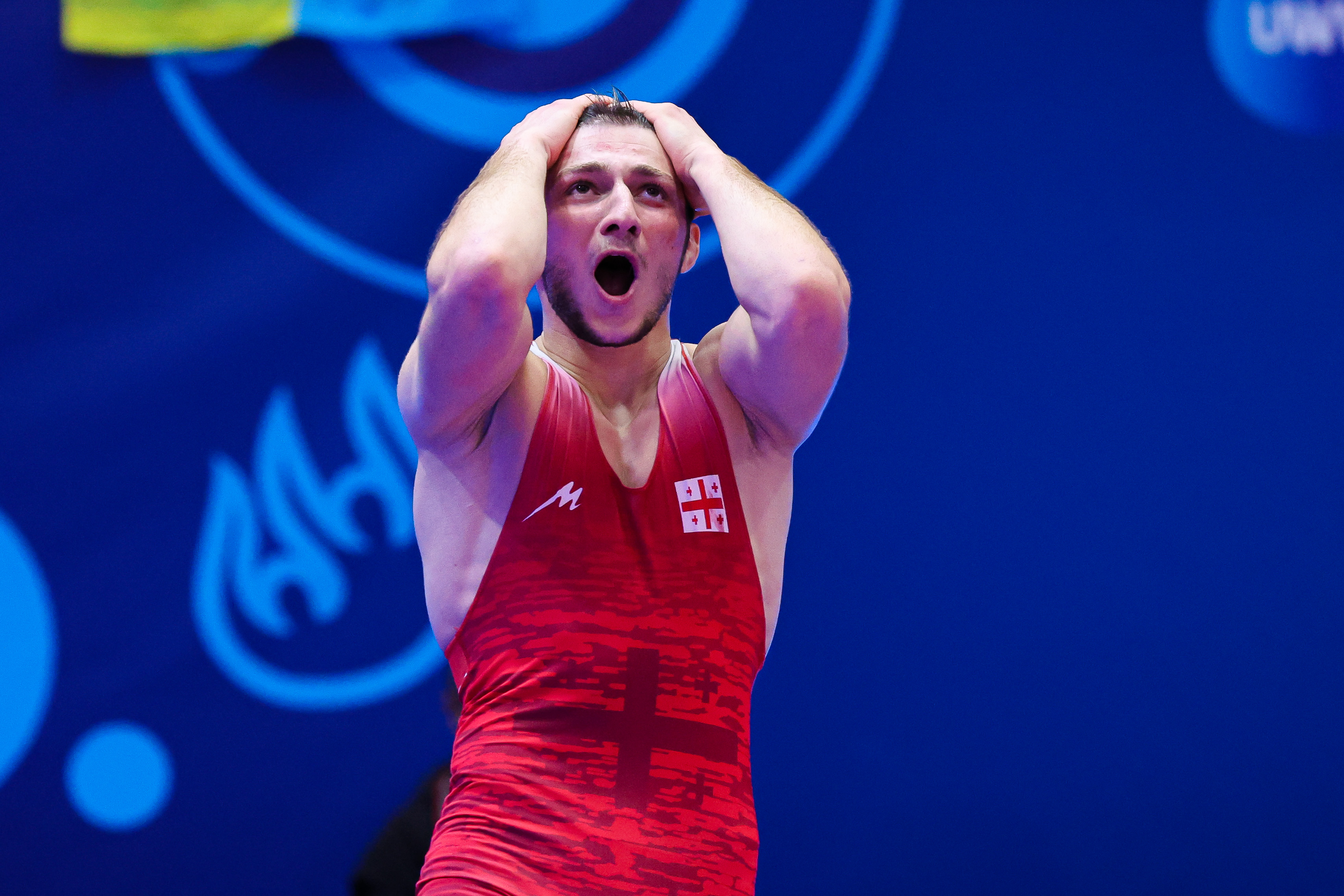 After getting a point for passivity, Gamkrelidze scored a takedown right before the break to lead 3-0. Yergesh was more active in the second period but Gamkrelidze did not want to engage and it was with just 35 seconds remaining that Yergesh got a stepout.

Yergesh needed two more points for criteria and went for a duck under but as he tried getting up, Gamkrelidze slammed him on the mat, earning himself two more points. He did give up a takedown but it was too little too late as the Georgian won 5-3. 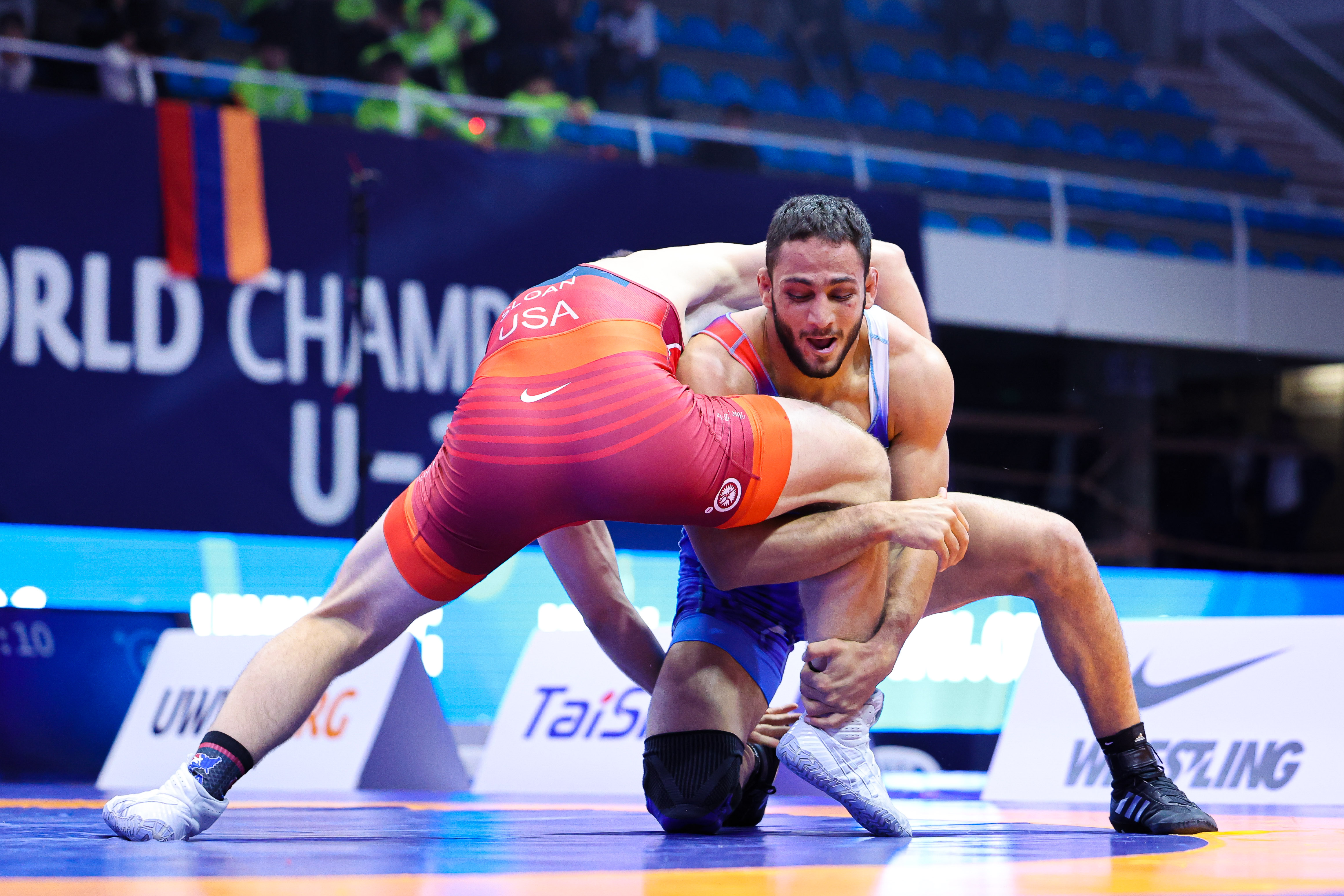 Azarpira got a single leg against Sloan and almost managed to take him down but Sloan defended, before scoring a takedown. But in the second period, Azarpira scored a stepout in the activity period before adding one more to take a 3-2 lead with a minute and 30 seconds remaining. He extended it to 4-2 with less than a minute remaining.

In the dying seconds of the bout, Sloan launched an attack and got hold of Azarpira's legs. But at no time did Azarpira make three-point contact with the mat and Sloan did not receive a point.

"The final match was a hard match," Azarpira said. "I pretty much knew it would be a tough match. I put in a lot of effort for this tournament after the U20 Worlds in Bulgaria. I had a bad experience in Bulgaria and couldn't get the medal that I wanted, I ended up in third place.

"After that, I tried very hard and was very organized in my preparation for this tournament and thank god I was successful."

At the U20 Worlds in Sofia, Azarpira suffered a surprising 6-4 loss to Rifat GIDAK (TUR) and returned home with a bronze. It was a wake-up call for Azarpira who went there thinking that he would return as a champion.

"Before Sofia, I went in thinking I was guaranteed the gold," he said. "I ended up not getting what I expected. After that, I gathered myself and trained hard and with discipline in order to get the gold here and thank god that happened." 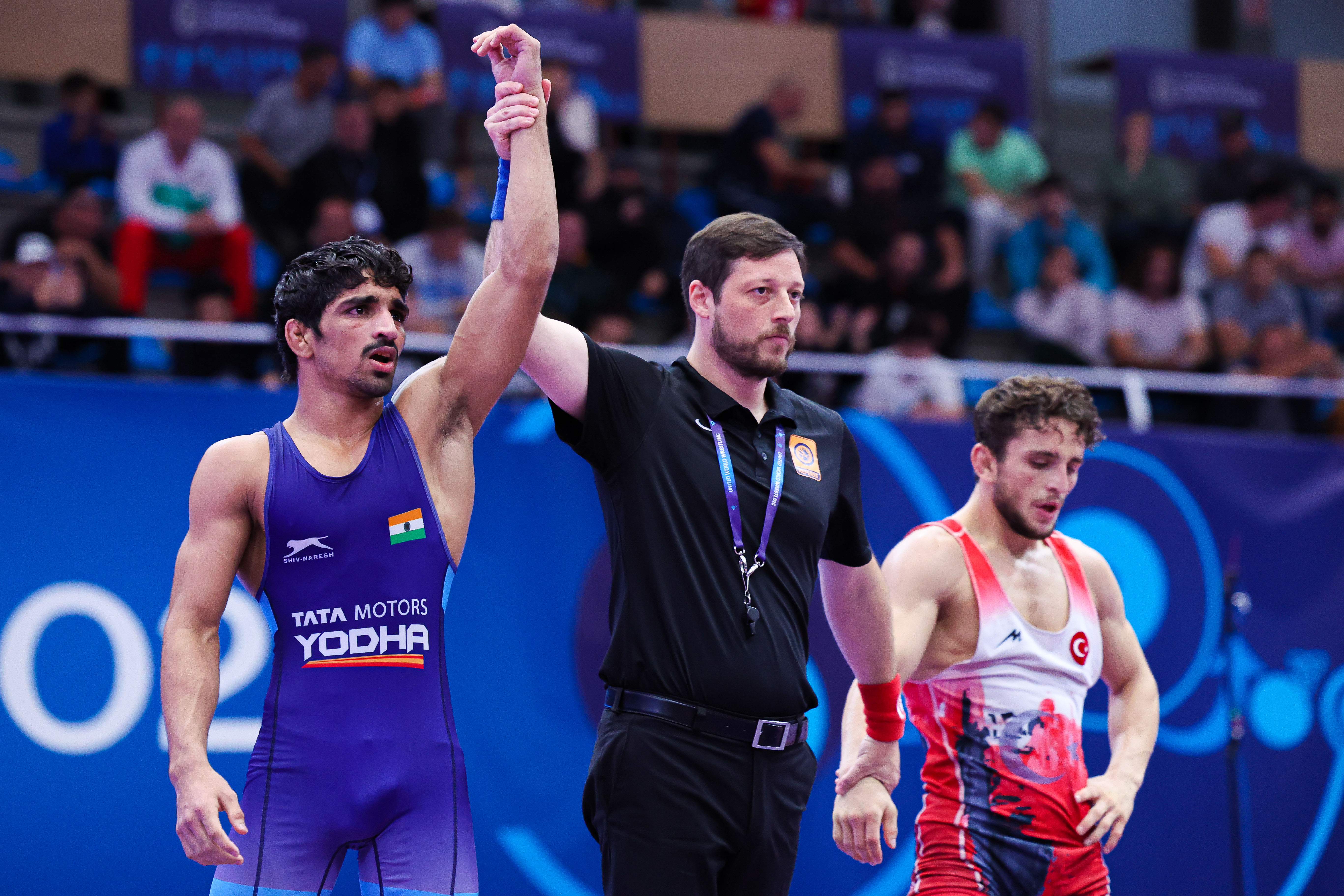 India entered only one wrestler in freestyle and he is returning home with a gold and history. Aman SEHRAWAT (IND) won the 57kg gold medal in Pontevedra, becoming the first Indian to be crowned a U23 world champion.

In the final, he faced Ahmet DUMAN (TUR) and started as the underdog as Duman enjoyed a field day Friday, winning all three of his bouts via technical superiority.

He began on a similar note, scoring a stepout in the first 15 seconds. Sehrawat was called passive as Duman led 2-0 at the break.

It all changed after the 30-second interval as Sehrawat's relentless attacks, with a shade of Olympic silver medalist Ravi KUMAR (IND) in them, stunned Duman.

Attack per attack, the two-time U17 world bronze medalist racked up points and led 6-2. Duman got an opportunity to turn it around but failed to get a lace going after scoring a takedown. Sehrawat never gave him a chance again.

A 12-4 win sealed the deal for the Indian, who was orphaned at the age of 11 years. He won the first gold after seven silver medals across all styles for the country.