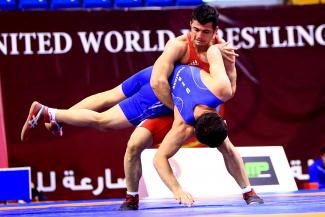 DOHA (May 10) – Iran won the Greco-Roman team title at the 2015 Asian Championships, but it was Korea’s dynamic duo of RYU Hansu and KIM Hyeon-woo that stole the show Sunday night at the Aspire Dome in Doha.

Ryu, a 2013 world champion, earned his second major regional championship in eight months having taking home gold at the 2014 Asian Games. The fourth-ranked wrestler in the world, Ryu drew a game No.15 Mohammadali GERAEI (IRI) in the 66kg finals. After a slow first-period a frustrated Geraei jumped over Ryu’s head, but in missing his target gave up a chest lock to the score-hungry Ryu. Geraei was crumpled backwards, ceding four points to Ryu who sealed the match, and gold medal, 5-0

World No.1 KIM Hyeon-woo (KOR) followed his countrymen’s title with a dominating run of his own at 75kg. Facing unranked Atabek AZISBEKOV (KGZ) -- who had earlier upset No.8 Payam BOUYERI PAYANI (IRI), 6-4 -- Kim found a takedown in the first period and poured on the pressure in the second to earn two points for a caution to take a 4-0 lead. Azisbekov countered with an arm drag takedown early in the second, but moments later the 2012 Olympic champion locked in an upper body grip for a four-point throw and eventual fall. 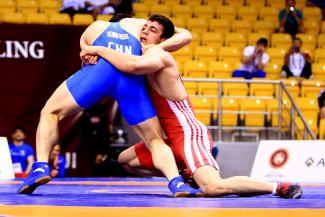 Iran’s gold medal of the final day came in what was the most exciting bout of the finals between unranked AISHAN Aisha (CHN) and No.18 Yousef GHADERIAN (IRI). Capitalizing on a forced par-terre, Aishan jumped out to a 6-2 lead over a stunned Ghaderian. Rattled but undeterred, Ghaderian came back to the center of the mat, locked in an over-under position and committed to an unlikely lateral drop. The risk worked and the Iranian youngster put Aishan to his back for four points.

Ghaderian extended his lead with two more takedowns and an exposure to win the back-and-forth contest 13-6.

China and Iran met in the 98kg finals as XIAO Di (CHN) and No.7 Mahdi Abbas ALIYARIFEIZABADI (IRI) took the mats for the tournament’s night’s penultimate match-up. Aliyarifeizabadi controlled the match start to finish, finding consecutive gut wrenches to go up 4-0 on an exhausted Xiao. A takedown late in the first made the score 6-0, which is where the contest would end, giving Iran their second title of the night.

In the tournament’s final bout it was 2014 Asian Games champion No.5 Nurmakhan TINALIEV (KAZ) slipping past as surprising and aggressive No.12 MENG Qiang (CHN), 3-2 to earn the gold.

Iran won the Greco-Roman team title with 63 points, edging Kazakhstan with 58 and China who finished with 57 points.

The next continental championship will be the African championship May 30-31 in Alexandria, Egypt. The European Games for wrestling will follow and be competed Jun 13-18 in Baku, Azerbaijan. 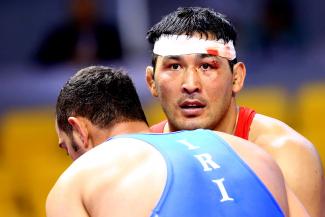