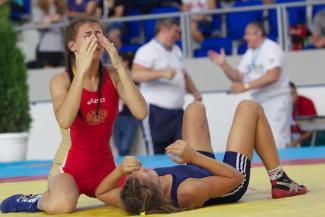 Zrenjanin, Serbia (Aug. 23)--The Japanese national anthem played more than any other country’s over the two day’s of the women’s freestyle competition, but when the final team standings were announced in at the Sports Hall in Zrenjanin it was the Russians who were serenaded by the chords of their homeland’s chorale.

It was close.  The Russians outscored the Japanese by only three points earning a final tally of 74, while the Japanese nibbled on their heels with 71 points. The Ukraine finished in third with 52 points.

Parity was a big part of second day of action with women from a dozen countries saw their flag raised Friday night including those from Mexico, Venezuela, and Belarus. Women from five countries earned gold across the five competed weight classes.

The most dominant individual performance of the finals belonged to two-time Cadet World Champion Mayu Mukaida of Japan. The 52kg wrestler made short work of Luiza Suleymanova pinning the Russian only 58 seconds. But Suleymanova wasn’t alone in losing by fall to the powerful Japanese wrestler -- Mukaida recorded four first period falls during the competition. Laman Gurbanova of Azerbaijan and Viktorya Didkivska of Ukraine earned bronze medals.

Local favorite, Ramona Galambos of Hungary gave a special performance for the supportive crowd, turning in a gold medal performance at 60kg a gold medal. The European champion beat Laura Charashvili of Belarus in the final by a score of 5-0. The Serbian fans were appreciative of her effort and greeted her win with a warm applause. The bronze medals went to Kriszta Incze of Romania and Shiomi Imai of Japan.

Russia’s championship was delivered in the second match of the evening, when 46kg scrapper Zainab Magomedova used a cradle to pin Olena Kremzer of Ukraine in 1:18. The Russian stayed on her knees after the call and began to weep, bringing her hands to her face before eventually running into the arms of her coaches. Adrianis Castillo of Venezuela used strong double leg finishes and a tough attitude to grind past Beata Kosla of Poland, 8-1, and take home bronze. Castillo’s was the only medal earned by a South American country. Miho Igarashi of Japan took home the other bronze.

The first five weights of the Cadet World Wrestling Championships in men’s freestyle will begin tomorrow at 2pm local time with 42kg, 50kg, 58kg, 69kg, and 85kg. Finals scheduled to begin at 7pm.

Be sure to check out FILA-official.com for the tomorrow’s LIVE Stream, and facebook.com/fila.official for any updates, highlights and photos from Zrenjanin.