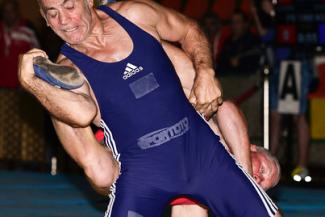 SARAJEVO, Bosnia and Herzegovina (October 7) – Wrestling is not easy. For the young it’s a way to shape the body and mind -- a sport that teaches boys and girls the importance of discipline and respect, lessons that guide their development for life.

For wrestlers at the Veterans World Championships in Sarajevo this week, the motivation for competition was a little different. They competed for the love and passion they still have for the sport that shaped their lives. Past their days of year-round competition the Championships gave these coaches and part-time wrestlers an opportunity to compete.

Steve Turgeon (USA), who won freestyle gold at 58kgE uses the Veteran World Championships as a way to keep motivated and stay shape. The 57-year-old wrestling coach from Connecticut trains 4-5 times a week with his athletes, and meets up with other Veteran-level wrestlers for practice.

“I coach and love wrestling,” says Turgeon. “Competing is always a blast and with the Veterans it’s a fun, and competitive way for me to get back on the mats and show myself what I have.”

Wrestlers from 33 countries across four continents met in the capital of Bosnia and Herzegovenia to compete for Veterans gold. Wrestlers were allowed to enter both freestyle and Greco-Roman, with senior weight classes broken into seven categories: 58kg, 63kg, 69kg, 76kg, 85kg, 97kg, and 130kg.

Unlike other levels of FILA wrestling, the Veterans event includes brackets for seven age divisions, starting with the “A” bracket featuring the 35-year-old competitors and increasing in five year increments until “G”, which featured wrestlers aged 66-70 years.

The age bracket is intended to ensure the most competitive, yet friendly contest between wrestlers who are well outside of their prime competition years. To ensure that the tournament has a healthy number of enrollees in as many of the 49 brackets as possible, FILA has allowed for countries to enter more than one wrestler in each weight class. Wrestlers from more than a half dozen countries earned gold, including several from traditional powerhouse programs Russia, Turkey and the United States.

The Americans were one of the many teams brought wrestlers from across the age spectrum and came away with six champions ranging from A and G classifications.

Jason Goldman (USA) took home 58kgA gold in freestyle and silver in Greco-Roman.  The 38-year-old was competing in his first Veteran World Championships, a decision he made after spending the past few seasons training for the Maccabiah Games. He sees a future for himself in the competition.

“The Worlds were such a cool event,” said Goldman. “I had a tough draw, and those guys were very good, but every match I wrestled meant a lot to me. This is something I’m going to start training for every year.”

On the far end of the Veteran classification range was Terry Harris, who won freestyle gold at 76kgG. The 71-year-old wrestler was over the age limit for the G classification, and was forced to write two letters of appeal to FILA asking for permission to enter.

“I should probably write them another letter thanking them for the opportunity,” joked Harris. “The proof I guess is in the pudding.”

Harris, who was a high school wrestler that picked the sport back up in his 60’s believes that if more people knew about the tournament they’d find a way to compete.

“I think if more wrestlers knew about the Veterans tournament and how much fun we have, there would be even more competitors. There is nothing more fulfilling than winning a wrestling match.

“I loved hearing my national anthem being played as I stood on top of the podium,” said Harris. “It was such a thrill.”

Breakdown of Brackets and Classifications